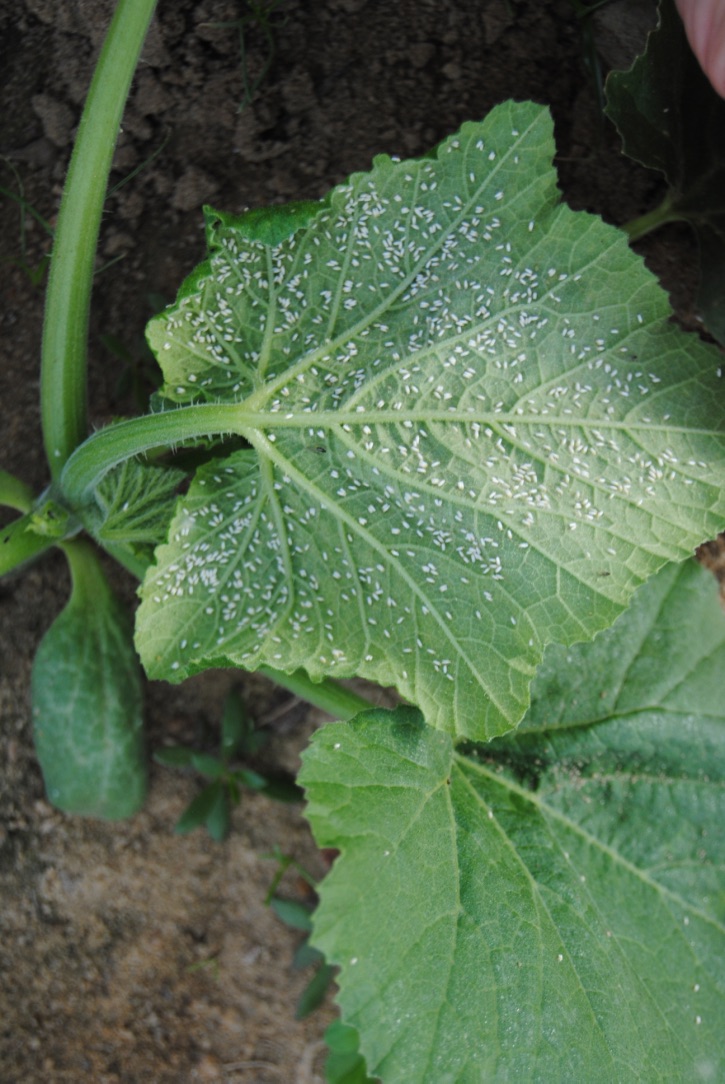 The sweetpotato whitefly, commonly referred to as whitefly, is a major problem in vegetable production in Georgia and the southeastern United States. The whitefly can colonize hundreds of host plants in the landscape and has established itself year-round in this region.

The pest has a short life cycle and is equipped with prolific reproductive capabilities. Consequently, its populations explode when conditions are favorable, especially in the fall season. Favorable conditions generally include warm winters, lack of frequent rainfall and availability of numerous hosts.

DAMAGE AND OTHER DIFFICULTIES
Whitefly feeding reduces yield and quality in several crops due to silvering of leaves and irregular ripening of fruits. Whiteflies are especially difficult to manage in agricultural settings such as those in Georgia where the vegetable production is typically high-input oriented and is economically very valuable. Thus, there is minimal tolerance for this pest.

Growers resort to spraying insecticides quite often, sometimes multiple times within a week. Such widespread use of insecticides is detrimental on multiple levels: it significantly reduces or eliminates the natural enemies of whiteflies, drives up production costs, and leads to development of insecticide resistance in whiteflies.

Management of whitefly populations to suppress feeding damage has been challenging in Georgia. In addition, whiteflies have been documented within the last two decades to transmit several important vegetable viruses. These viruses are even more destructive to vegetable production when compared with direct feeding damage caused by whiteflies. A single whitefly alone can transmit virus or viruses capable of infecting vegetable plants within a few minutes of feeding.

It is typical in Georgia in the fall to observe dozens of whiteflies on a single leaf, and in some years, up to hundreds on a single leaf. Given this situation, it becomes impossible to manage whiteflies at the desired level. Out of desperation, multiple insecticide sprays are often used to no avail, and substantial crop losses occur. This vicious cycle seems to repeat year after year.

CROP LOSSES
According to University of Georgia (UGA) crop loss estimates in 2016 and 2017, tens of millions of dollars were lost due to whiteflies and the viruses they transmit in tomato, cucurbit (yellow squash, zucchini squash and cantaloupe) and green bean production. In 2018, such losses were difficult to quantify due to interference by a hurricane. Nevertheless, whitefly intensity was lower in 2018 than in the previous two years. The factors driving year-to-year fluctuations in whitefly populations are currently being studied at UGA.

In Georgia vegetable production, a whitefly-transmitted viral complex infects multiple crops. More than a half dozen viruses are typically found. It is also common to find plants infected with more than one virus simultaneously. When multiple viral infections are found in a single crop, the symptoms are typically more severe, and accompanying yield losses are higher. Once a plant is infected, there is no therapeutic cure. Therefore, all management measures must be preventative to be effective.

MANAGEMENT METHODS UNDER STUDY
Besides affecting vegetables, whiteflies also infect row crops such as cotton. To address this complex issue, interdisciplinary research is critical. UGA has formed a whitefly response team to develop short- and long-term solutions to this issue. Scientists from the departments of entomology, horticulture and plant pathology are working together to address this all-important issue.

The squash cultivars that are commonly grown today are not resistant to whiteflies or the viruses they transmit. When resistance is available in tomatoes, it is not complete and must be complemented with other tactics. The host resistance status in beans is currently being evaluated. Therefore, there is no single “silver-bullet” management tactic that can provide sufficient protection.

The UGA whitefly response team is now beginning to screen plant materials for resistance against the viruses and the vector (whitefly). In addition, the team is working on integrating multiple cultural management options such as reflective and live mulch, planting date alterations, fertility variations, row covers and pre-planting options in the greenhouse.

The short-term goal is to develop a management package with additive benefits leading to enhanced production and profitability. In the long-term, the team intends to improve host resistance and develop a sustainable and holistic management strategy integrating host resistance with cultural and chemical management options.

Whiteflies and viruses have established themselves in the landscape, and evidence thus far suggests that they are here to stay. Our research is geared to combating whiteflies and viruses transmitted by them and hopes to provide effective near- and long-term solutions to Georgia growers.

Rajagopalbabu Srinivasan is an associate professor in the Department of Entomology at the University of Georgia in Griffin.