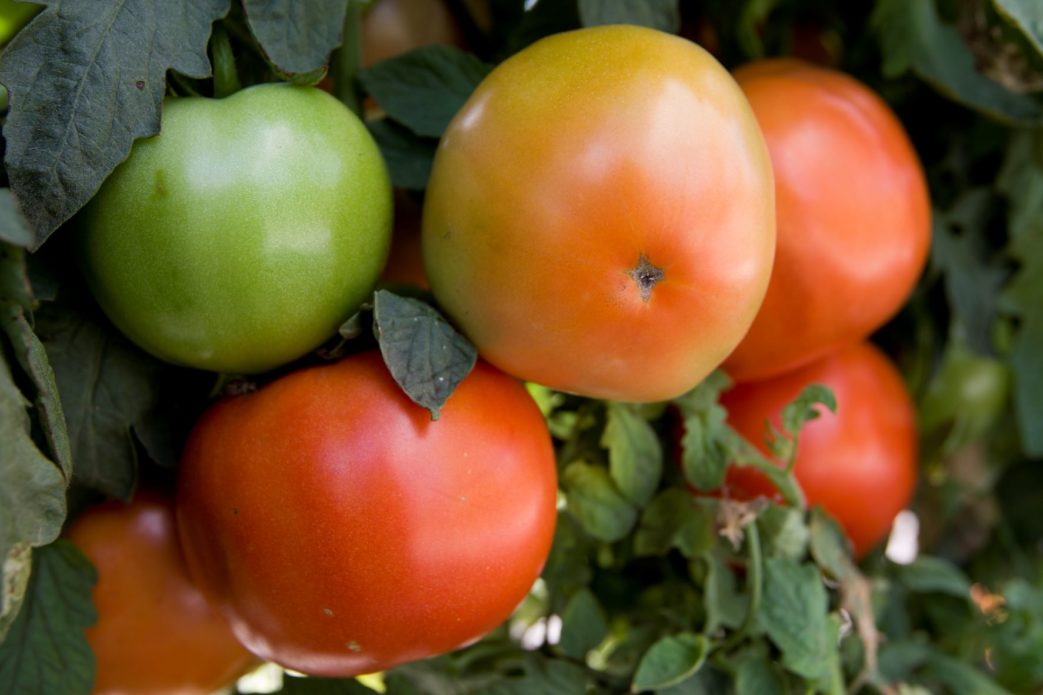 Extension Entomologist Tom Bilbo reports, “As tomatoes and other fruiting vegetables progress, make sure you’re protecting yields from insect and mite pests. I’ve seen a fair bit of caterpillar pressure (fruitworms and loopers). Bt (DiPel, OMRI-listed) can work well, but group 28 insecticides (Coragen, Harvanta, etc) will provide better suppression with longer residual, and these are also fairly selective options. Insecticide options for stink bugs are more limited. Use a group 4A neonicotinoid foliar application (Actara or Venom) rather than a group 3A pyrethroid to avoid flaring spider mites. Organic growers have less effective options for stink bugs, but Pyganic and Azera can provide some control. Remember, it’s a lot easier to kill insect pests when they’re in their smaller immature stages. Spider mites are going to love this hot/dry weather, and populations can increase dramatically in a short period of time. Be scouting your fields at least weekly, and in tomatoes, apply miticides when spider mites average 0.5 mites/leaflet. (Sample at least 50 leaflets total from five different locations throughout a field). Bifenazate (Acramite), cyflumetofen (Nealta), and abamectin (Agri-Mek) are all effective options, but note differences in post-harvest interval. Save Acramite and Nealta for when harvesting is underway.”

Zack Snipes reports, “It has warmed up in the Lowcountry, and the produce is rolling in. We have had a few afternoon thunderstorms as of late, but the distribution of rain varies from farm to farm. Some farms are still extremely dry, while others have gotten the right amount of rain. I am hearing reports of wilting tomatoes (Southern Blight and/or Bacterial Wilt) and wilting watermelons (most likely Fusarium wilt). For these crop diseases that cause wilting, there is nothing we can do this year, but take notes of what happened and where. We can make a management plan for next season. We had a great time at the Coastal REC Field Day this past week.”

Justin Ballew reports, “It is hot and dry in the Midlands. Another week has gone by without any widespread rain. Regardless, we are an uptick in certain diseases such as powdery mildew of cucurbits and bacterial wilt and Southern blight of tomatoes and peppers. We haven’t yet found cucurbit downy mildew in the Midlands. That’s probably the only good thing about the dry weather. We are also seeing some blossom end rot in tomatoes, as it’s been tough to keep the soil moist. Insects seem to be enjoying the heat. I’m seeing lots of squash bug eggs on cucurbits, and diamondback moth caterpillars are still high in some areas.”

Kerrie Roach reports, “Summer has arrived… the heat is rising, heavy sporadic downpours each afternoon, insects numbers are increasing by the minute it seems, and diseases are everywhere. We’ve had a few small growers bring in samples of cedar-apple rust on apple leaves. This has to be controlled earlier in the season (tight cluster to pink) when it is sporulating from galls on the cedars, with a FRAC 3 fungicide like fenbuconazole, mancozeb(M3) or triflumizole.”

Andy Rollins reports, “Just started picking squash, zucchini and pickles(cucumber). Also picking 1/2 runner beans. Tomatoes are still a week or two off, but there are plenty of crop problems like bacterial spot and early blight on leaves. The main difference between these is bacterial spot has small lesions typically with a halo around them. Early blight will typically be larger and have spots with concentric rings inside of it. Some plants are being killed entirely by Phytophthora sp. We are at the green fruit stage now so make sure to keep up with watering and make sure to get good spray coverage through these large plants. Strawberry season is over at this point in the upstate, and some have cleaned up their fields. Others are in process of planting a second crop behind them. Peaches are progressing. Growers are concerned about some seed damage but plenty of good quality as well. Picking Junegold and Rubyprince. Gala will be coming in next.”