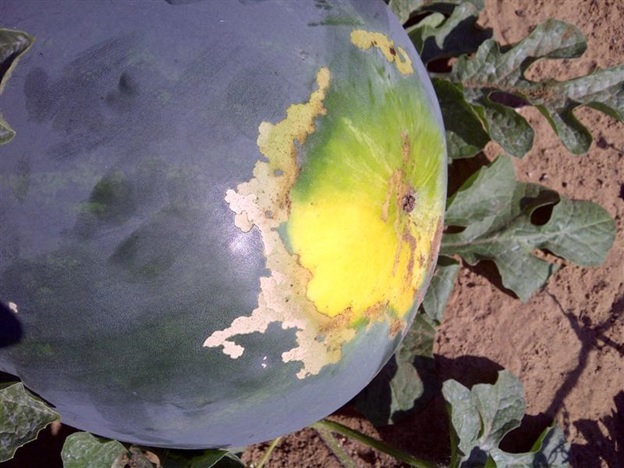 North Florida watermelon producers should be applying insecticides on a preventative basis when targeting rindworms.

Bob Hochmuth, University of Florida Institute of Food and Agricultural Sciences (UF/IFAS) Regional Specialized Extension agent in Live Oak, Florida, advises growers that an economical program consists of adding a Bt (Bacillus thuringiensis) spray now and continue weekly until pest pressure gets high. Bt is effective in killing younger worms shortly after they hatch from feeding on the leaves. But it is not a good choice for larger worms discovered later in their life cycle.

Once pressure is high, farmers can switch to other products like Coragen or Intrepid. This has been the general program UF/IFAS scientists have used successfully at the North Florida Research and Education Center-Suwanee Valley in previous years.

“For the rindworms, we’d also like to be on a preventative program for them. They’re also difficult because once they start feeding on the fruit and then crawl underneath the watermelon itself, they’re really difficult to control. We’re trying to get them controlled before they get down underneath the fruit,” Hochmuth said.

Watermelon harvests should begin within the next week in the Suwanee Valley area. Hochmuth estimated a timeframe of May 18-20 for initial harvests with the 25th pegged as the date a bulk of fruit should be ready. Growers try to have much of their product ready for the Memorial Day window. They are fortunate that Memorial Day is later this year, set for May 30.

“I think the earliest (watermelons) will be there, but everybody got sent back to the same starting line. I think they’re all going to start very similarly in that timeframe,” Hochmuth said.