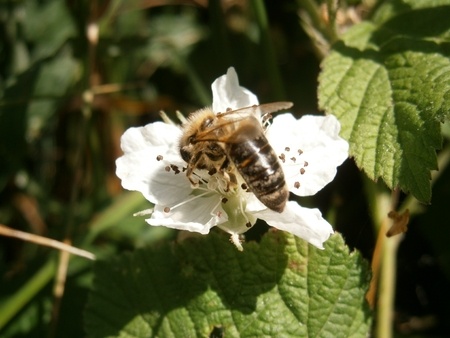 Varroa mites have been in the United States since 1987, but there’s still not a good solution for controlling them. These mites impact honeybee colonies by feeding on the bees and vectoring viruses. The mites pass viruses around the colonies and make the bees very sick.

Varroa control is tricky because the goal is to kill an arthropod that’s on another arthropod.

Cameron Jack is an apiculture lecturer and distance education coordinator in the entomology and nematology department at the University of Florida. His PhD work has been on Varroa control. Jack’s research involves taking an integrated pest management approach to find different options to figure out what is the most effective.

“It’s like chemotherapy. You’re trying to release a toxin into the hive that will kill the mites but not kill the bees, but everything that you put in is going to be toxic to the bees,” explains Jack. “It’s about finding that balance and the right amount of the compound that will kill the mites but not the bees. It’s a really tricky game to play, especially when mites become resistant to treatments fairly quickly.”

Jack has been trying to find new methods and doses that will be more effective at controlling the mites. “This year, we spent a significant amount of time trying to determine how Varroa grows naturally in colonies and trying to model that,” Jack says. “Then, later on, we want to add another component to look at different treatments and at how effective they are in different seasons with the ultimate hope of being able to provide beekeepers with a decision-making tool that might help them improve their treatment plan for their own colonies.”

Jack and other researchers work with beekeepers all over the world while trying to find solutions to the mite problem. The lab work happens at the UF Bee Lab, but the field work is happening everywhere.

Varroa mites affect not only beekeepers trying to make a living, but also growers who need pollination for their crops. “The problem is that commercial beekeepers are constantly having to split their colonies to maintain their numbers,” explains Jack. “This makes them have a very hard time filling their pollination contracts. If beekeepers can’t control Varroa, then they’re going to have a very difficult time keeping healthy bees and big strong hives, which is what’s required to fulfill their contracts for pollination.” The contract requirements are typically about a basketball-size amount of bees or 10 frames of bees, depending on the contract and the grower.

A result of the Varroa problem is that growers have fewer beekeepers who are able to meet pollination requirements. “I think, for the most part, beekeepers are really trying their best to keep and maintain healthy colonies,” says Jack. “That’s their livelihood, and having those continued partnerships with growers is definitely a partnership that needs to last … I think that with time and with continued research, there’s going to be more effective Varroa controls that come forth.”