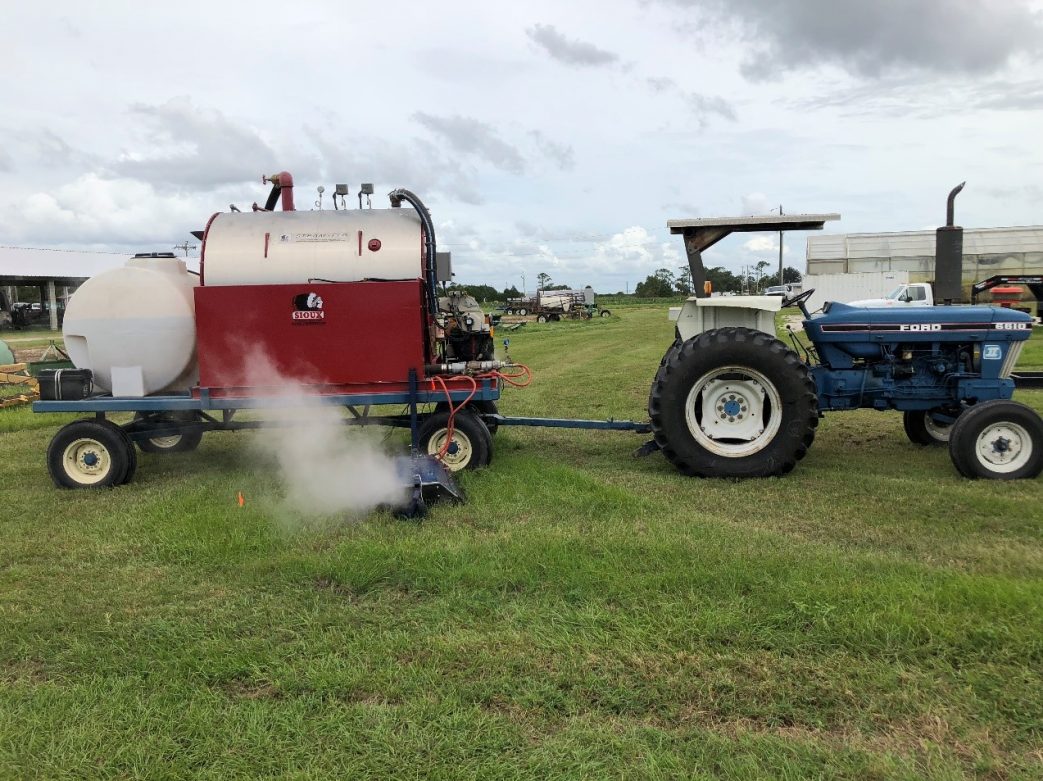 Weeds are a significant problem in horticultural production and must be controlled to maintain good crop yield. Concerns related to non-judicious use of herbicides, which include ground and surface water contamination and pesticide residues in food, have sparked public awareness and restrictions on herbicide use.

Steam application has been in use for soil disinfestation and sterilization in agriculture for over 40 years. The potential of steam as a weed management strategy to control various weed species has been demonstrated over the years. There are several advantages of applying steam for weed control, including weather-independent applications. In other words, steam can be applied under any conditions of wind and rain without any concerns about drift, runoff or loss of efficacy. With proper and safe equipment use, steam can also be applied within the proximity of people and animals.

Steaming is an example of how engineering principles can be utilized in the development of a strategy for sustainable weed management. The resulting new equipment will not only reduce the chemical footprint of the farm, but also will suit the practical needs of farmers.

At the University of Florida Institute of Food and Agricultural Sciences (UF/IFAS) Southwest Florida Research and Education Center (SWFREC), researchers have developed a prototype of steam weeding equipment that could be attached on a trailer (Figure 1). The key components of this equipment include a water tank, water pump, steamer, generator and a boom section with modified nozzles for channeling the steam generated onto the weeds’ stem and canopy.

Steam weeding is a foliar contact technique in which a temperature of approximately 212F is applied for a specific duration of time, causing intracellular water to expand and rupture the cell membrane. Consequently, the weed will dehydrate and eventually die. Steaming enables more rapid transfer of lethal heat into the cell structure of a weed. When compared to other thermal weed control techniques like flaming, deeper penetration into the crown of the plants is achieved in steam application. Steam can destroy the growth points of weeds.

In a recent SWFREC study from our group (including a postdoctoral research associate, Jaafar Abdulriha, and a laboratory technician, Cami McAvoy), the relationship between steam flow rate and application speed on the weed control effectiveness of steaming was explored. The primary objective of this project was to assess the potential of steam as a non-chemical tool for in-row weed management in citrus groves.

The combination of low tractor speed and high steam flow rate was the most effective of the steam treatments tested (up to 84 percent total weed burndown was observed at 12 days after application). Moreover, the optimized combination was found effective in controlling weeds like goatweed and sedges. The observations suggested the possible use of the steam application as a non-chemical and sustainable strategy for weed management in horticultural production. The study is published in the journal Applied Engineering in Agriculture (DOI: 10.13031/aea.13494).

The success of the steam application on weed burndown depends on a thorough canopy and stem penetration. For instance, the steam application was found to be relatively ineffective on certain weeds, like pusley, due to their prostrate (creeping) growth nature, which prevents an adequate coverage of steam on the entire plant.

Steam offers immense capability for weed control; however, its practicability for longer-duration weed suppression must be further investigated. Many of the widespread weeds in citrus and vegetable production have been introduced from prairies and forest environments. So, it is not unusual for these weeds to get exposed to disturbances of thermal nature — for instance, fire. Hence, some of these weeds are adapted to grow back from the steam burndown. These weeds often could rejuvenate from a living root system or underground storage structure to produce a new flush of growth.

In our study, when steam was applied for weed management, a noticeable regrowth of the weeds was observed after a few weeks. However, such regrowth potentially could be managed with additional applications or in conjunction with a chemical weed control method.

Steam treatment, with repeated applications, has the potential to be an alternative non-chemical strategy for weed management in horticultural crops. Steaming could be a potential tool for vegetation maintenance along the drainage ditches in vegetable farms and citrus groves. Our group is currently field-testing the weed steamer to burn down vegetation in ditches (Figure 2) instead of the standard practices of mowing and herbicide applications. Moreover, the prospects of testing steam application for managing the weed seed bank in soil need to be evaluated.

Injecting high-pressure steam to raised beds as an alternative to chemical fumigation is a possibility that needs to be explored. Steam weeding may also have the potential to be utilized in combination with a reduced rate chemical management program for cost-effective weed control while minimizing adverse crop and environmental impacts.