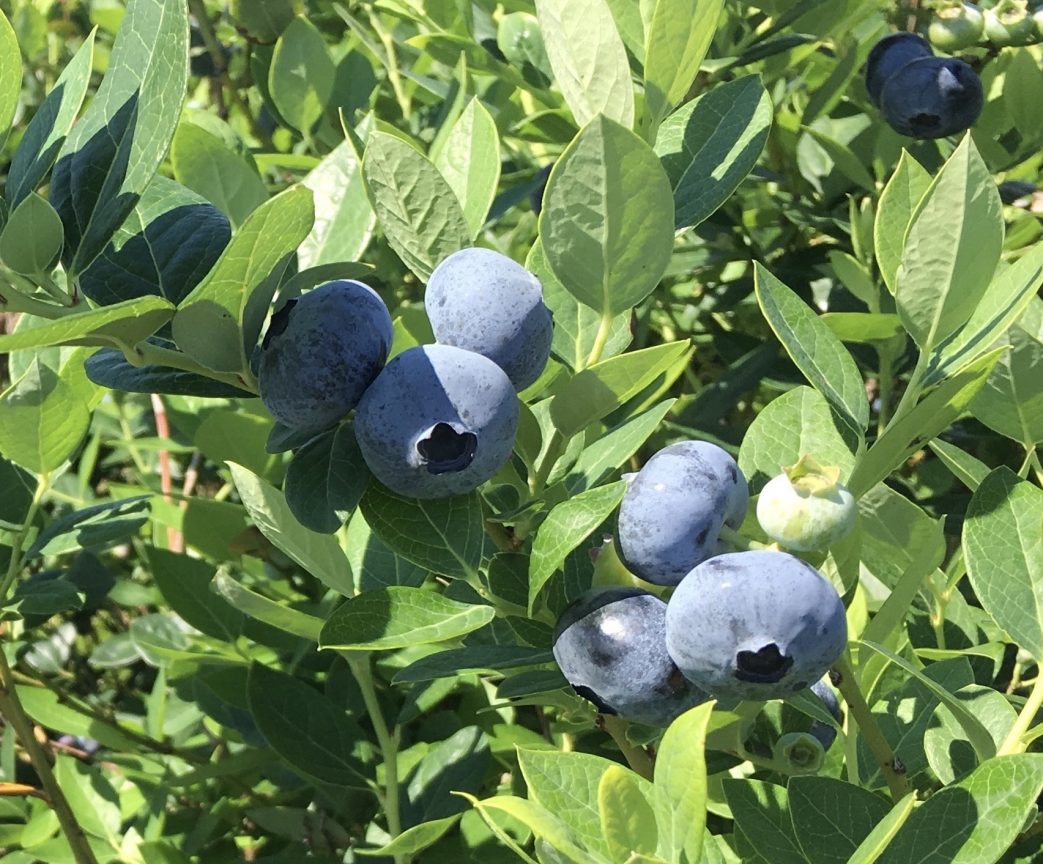 By Patricio Munoz and Doug Phillips

The University of Florida (UF) blueberry breeding program has a long history of developing superior southern highbush cultivars for the commercial blueberry industry. Beginning in 1949, the program has produced more than 40 cultivars, all of which exhibit a lower chilling hour requirement and adaptation to the higher temperatures and disease pressure experienced in Florida’s climate.

Blueberry breeding programs have historically used the recurrent phenotypic selection method, which is still used today. Selection of superior candidates is based on the cross-pollination of plants with favorable traits, the progeny of which are grown out and go through a series of successive selection, with favorable plants both advancing to the next stage and being used as parents for the next breeding cycle.

From an initial planting of 20,000 seedlings, each cycle’s population is narrowed to 10 to 15 percent, of which only a few may ultimately be released. With this method, the development of a new cultivar from cross-pollination to release can take between 10 and 12 years.

However, since the original selections from the wild at the beginning of the program until today, significant improvement has been achieved. In 2018 the UF blueberry breeding lab demonstrated by an extensive review of the literature (Cappai et al., 2018) that firmness has been steadily improved, reaching levels that make almost all new cultivars acceptable for machine harvest, and that, in general, southern highbush cultivars are firmer than northern highbush.

More recently, advanced methods including quantitative genetics and molecular information have been introduced, which have the potential to shorten the breeding cycle. These methods include using statistical methods to model molecular markers linked to genes associated with favorable traits. This can be done much earlier in the breeding cycle, instead of waiting until a plant becomes mature to observe whether certain traits will be present.

In 2019, the UF blueberry breeding lab performed a proof of concept experiment of these methods and demonstrated their feasibility (Oliveira et al., 2019). The focus during 2020 has been on optimizing these methods, which will be reported in studies to be published in the near future.

Other areas of research in the UF breeding program include flavor perception, container production and alternative season production.

The UF breeding program recently finished performing studies to demonstrate that consumer “liking” perception can be predicted when using the unique chemical makeup of each new cultivar. The idea is to avoid bias in the selection process associated with the breeder in charge of creating and releasing new cultivars.

In this area, discoveries have been made regarding which chemicals are favorable to the flavor perception and which ones are detrimental. This work started many years ago, and now with more information some of the findings can be validated.

Production in containers has become a global trend, primarily to produce high yields on marginal land because these soilless systems do not depend on native soil. The UF breeding program has been performing experiments as a proof of concept of this system for conditions in Florida. Results of second-year experiments show that, while these systems require high investment, they could become an attractive alternative for some Florida growers. The lab is in the process of refining the results to deliver some recommendations to growers.

In addition, the breeding program supports and collaborates in blueberry-related research in pathology, entomology, management and pollination.

As always, the UF breeding program is closely watching elite selections to release new cultivars. A major focus has been placed on consistency across locations and years, as well as on precociousness (the capacity to produce harvestable fruit the first year after planting).

The most recently released cultivars from the UF program, Colossus and Optimus, have started to gain traction with growers.

Colossus was released in 2019. It has exhibited a later blooming time with a short bloom to ripening period, and has better performance with low doses of hydrogen cyanamide. The fruit is very large to jumbo sized, is very firm, has good color and bloom and a small picking scar. Colossus has performed well in both North Central and Central Florida trial sites. The best fruit is obtained by allowing it to hang on the bush until the preferred sweet and acid balance is achieved. In 2019, the yield in North Central Florida was approximately 12 pounds per bush. Colossus can be machine harvested if needed.

Optimus was released in 2018 as an excellent choice for machine harvesting. It has good timing for the Florida market window, with high yields and natural early leafing. Optimus has firm, medium-sized, high-quality berries. It has performed well in machine-harvesting trials and exhibited good production across Florida in both deciduous and evergreen systems. Optimus yielded 14 pounds of fruit per bush in 2019 in North Central Florida.

Other recent releases, heavily used in the evergreen system, include Arcadia and Avanti, which were released in 2015.