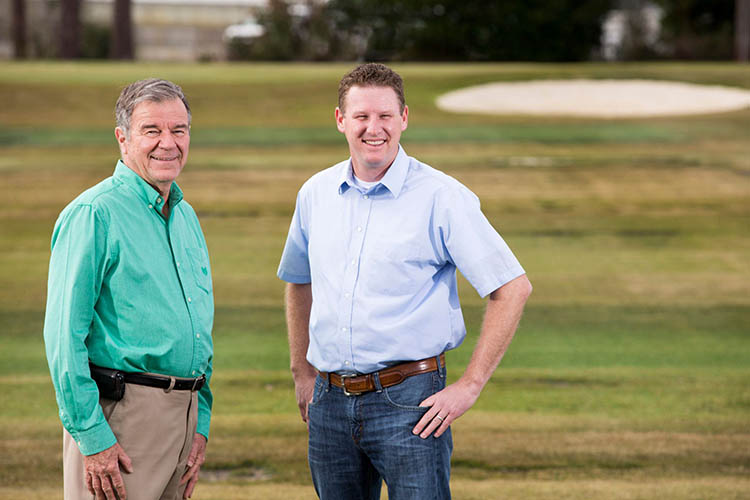 When the University of Georgia (UGA) Bulldogs take the field against the University of Florida (UF) Gators for their annual football game on Saturday, the teams will be playing in neutral territory at TIAA Bank Field in Jacksonville, Florida. But the grass they are playing on could be considered home turf for the Dawgs.

Grass at Home, Grass Away

Schwartz’s counterpart at UF, Kevin Kenworthy, professor of turfgrass breeding and genetics, was also Schwartz’s advisor while he earned his doctorate at UF, graduating in 2008.

Since 2010, Schwartz and Kenworthy have collaborated on a series of grants from the U.S. Department of Agriculture’s National Institute of Food and Agriculture (NIFA) Specialty Crop Research Initiative (SCRI) to develop drought-tolerant grasses. They work with researchers at North Carolina State University, Oklahoma State University, Texas A&M University and University of California, Riverside.

“Each of our teams creates new hybrids and we send those to each other to plant in identical test plots,” said Schwartz. “We run all the same tests and have five to seven environments for testing to narrow down to the best varieties. It is common to have a handful of grasses that perform really well in one place, but as soon as they are planted out of their area of adaptation, they go downhill.”

Through this collaboration among universities across the country, the researchers are able to work together to quickly find out which perform best as local varieties and which will work as national varieties, Schwartz explained.

Kenworthy respects the accomplishments his former student has achieved at UGA.

“Brian Schwartz is the latest person in the lineage in that position, and he is a fantastic individual, both on a personal level and professional level. It can be difficult to go into a high-profile position, but he’s taken it in his own direction and is collaborating more with other people and being very successful doing that,” Kenworthy said.

While Tifway and TifTuf are still the dominant varieties on the market from UGA, Kenworthy said he expects great things from Schwartz in the future.

“When you release these varieties, they need to have a time of success for the growers. The market and the growers can’t change varieties very quickly, so when you have a good variety, you need to let it run its course, but he’s got experimental lines on the shelf that he’s developed that we know are better because we’ve collaborated in the evaluation processes,” Kenworthy said of Schwartz. “Eventually, there will be even better products that will have been developed at Tifton and evaluated not only by UF, but also scientists at other universities. The future is bright.”

The success of the UGA turfgrass program is built on the legacy of retired UGA turfgrass breeder Wayne Hanna, who is well known for producing popular turfgrasses such as TifSport, TifEagle, TifGrand, TifBlair, and more recently, TifTuf. These grasses are used around the world, including at premier entertainment and sporting venues.

With only 150 miles between UGA-Tifton and the UF campus in Gainesville, Schwartz said the partnership between the universities is beneficial for many reasons.

“By having a good team of collaborators with similar expertise and who bring their own specialties, we are able to make gains much more quickly,” Schwartz said. “It’s always good to bounce ideas off people who are in the same discipline. In private industry, you would never talk to your competitors about how to do things better, but we are academics. We are not worried about sharing those things because we are land-grant institutions, we are all working toward our universities’ missions to improve things for the long run.”

No matter who wins the football game on Saturday, Kenworthy said he is content knowing a small secret about his “rival” turfgrass breeder and close friend.

“We have a lot of TifTuf growing here that we continue to evaluate. It’s a measuring stick in my own bermudagrass program, but we have CitraBlue, a St. Augustinegrass that was released from our program, and I know that Brian Schwartz’s home backyard is all CitraBlue. The Florida Gators may play on turf developed in Georgia, but the UGA turf breeder’s kids play on grass bred at UF.”