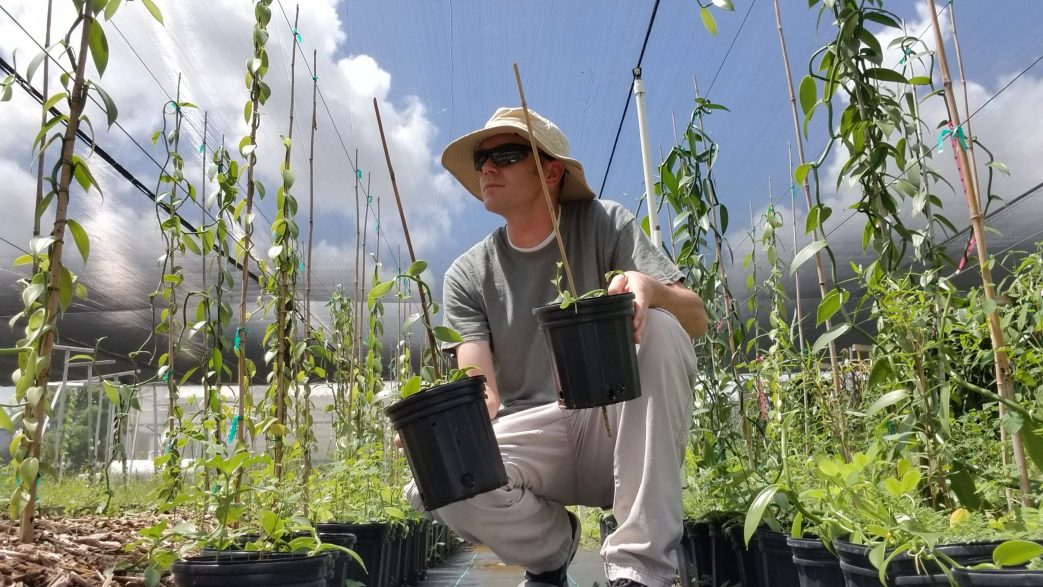 You can taste it now. A refreshing scoop of vanilla ice cream or milkshake can be tasty and help cool you down in the sweltering Florida heat.

To meet growing consumer demand for vanilla, Alan Chambers, a UF/IFAS tropical plant geneticist, is studying which beans to grow in Florida, and when and where to grow them. Chambers also wants to help Florida farmers diversify the crops they can grow. He’s been testing various vanilla species in his labs and fields at the UF/IFAS Tropical Research and Education Center in Homestead, Florida.

Over the next year and a half, Chambers plans to deliver vanilla plants to much of southeast and southwest Florida, where residents, UF/IFAS scientists and Extension faculty will try to grow them.

All those growing vanilla plants will monitor them for growth and survivability, Chambers said.

“The coming winter will tell us a lot about how temperature impacts the vanilla vines,” he said. “Those participating in the study will be able to keep the plants. It’s bringing together some great people — from state Extension specialists to Extension agents to active members of our communities – for a common cause. We are also breeding new vanilla cultivars focusing on yield, bean length and flavor.”

Another impetus for Chambers’ research? The United States relies on Madagascar for the bean. Over 80% of the world’s vanilla is produced in that country, off the east coast of Africa. America is the biggest importer of vanilla beans from Madagascar, and once in America, those beans are further processed into vanilla extract. As a spice, it is the second most expensive and is the world’s most popular flavor.

Chambers is focusing the next step of his research in southern Florida. He and his research team plan to bring vanilla plants to the state’s southernmost counties – including Charlotte, Collier, Lee, Sarasota, Broward, Miami-Dade, Monroe, Martin, Palm Beach and St. Lucie.

In addition to Extension agents in those counties trying to grow vanilla, scientists at the Southwest Florida, Indian River and Mid-Florida research and education centers will see if they can cultivate vanilla at on-site plots.

Twyla Leigh, director of UF/IFAS Extension Collier County and two of her agents will help grow the vanilla at the Extension campus in Naples and in residential backyards.

“This opportunity will test the possibility and conditions of growing a ‘value-added’ and potentially cost-effective/sustainable secondary crop for our small farmers in Collier County,” Leigh said.

“As a longtime orchid hobbyist and gardener, I am thrilled to be involved in this project that will benefit agriculture in Southwest Florida,” Leigh said. “I sent some cuttings to Dr. Chambers and, through DNA testing, learned the species of my vanilla plants was vanilla pompona. My first vanilla cuttings were gifted to me by my Master Gardener mother.”

Like Leigh, David Outerbridge, director of UF/IFAS Extension Lee County is a hobbyist gardener, and he takes a personal interest in growing vanilla.

“The potential to contribute to development and promotion of a new crop for Lee County and South Florida is phenomenal,” Outerbridge said.

Chambers is counting on residents’ help, too.

Some were selected to grow the vanilla plants based on their level of excitement and their support for his research. Some were picked based on their location, so UF/IFAS can spread out across counties.

“These people will grow the plants and become part of our community network of citizen scientists,” he said.

Chambers acknowledged the help of the UF/IFAS Dean for Extension and Dean for Research offices. Combined, the two offices funded the vanilla outreach program through a grant from the Support for Emerging Enterprise Development Integration Teams (SEEDIT) program.