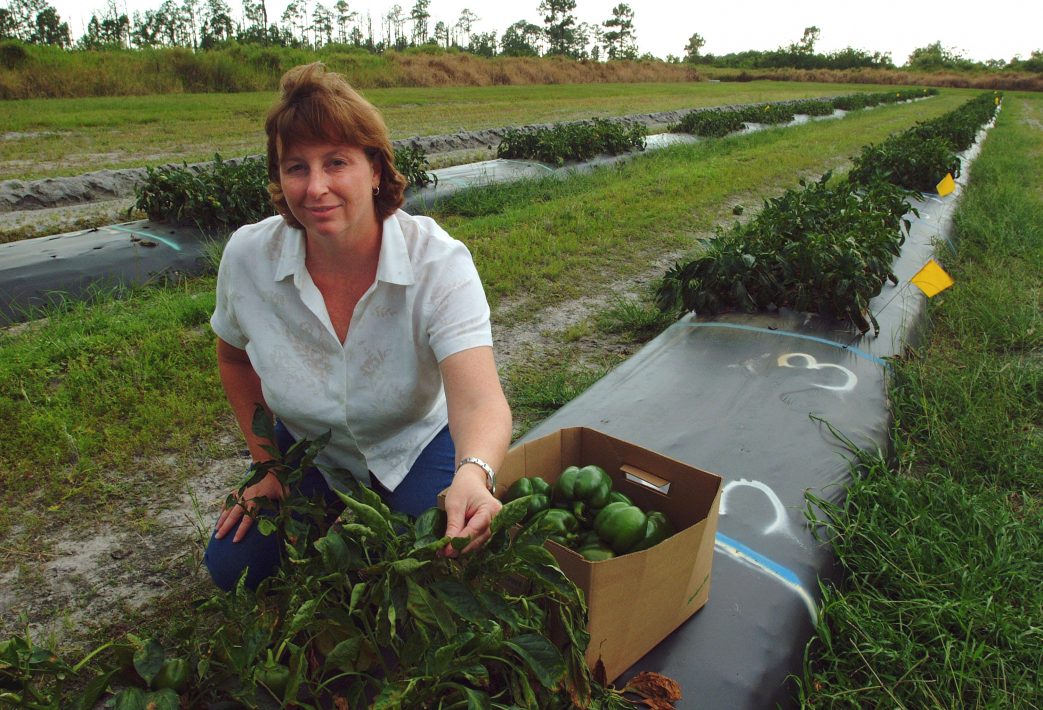 (UF/IFAS) — Pepper is popular. Consumers eat all kinds, including jalapenos, habaneros, chilis and more. Because people eat so much of the fruit, peppers are worth hundreds of millions of dollars a year to the Florida and national economies.

But, like all crops, peppers face diseases that threaten to reduce their production. So, a University of Florida Institute of Food and Agricultural Sciences (UF/IFAS) scientist is leading a multi-state effort to lessen the risk of diseases eating away at pepper harvests. With new data, scientists plan to help farmers increase their pepper production.

Pamela Roberts, a UF/IFAS plant pathology professor, has been awarded a four-year, $3 million grant from the National Institute of Food and Agriculture, an arm of the USDA, to lead research into ways to reduce bacterial diseases in peppers. Scientists from UF/IFAS, North Carolina State University, the University of Georgia, the Ohio State University, Auburn University and a USDA lab in South Carolina will participate in the pepper disease research.

For consumers – and thus, for the farmer — specialty peppers such as tabasco, habanero, bonnet, aji or Peruvian hot pepper are important in local and ethnic markets and for processing in products such as hot sauce or lipstick. Other peppers important for consumers are jalapeno, serrano and cherry, Roberts said.

But, plenty of diseases can harm peppers. Most bell peppers are resistant to bacterial spot, but other types of peppers are not, said Roberts, a faculty member at the UF/IFAS Southwest Florida Research and Education Center in Immokalee.

“Bacterial spot is one of the most damaging and difficult diseases to manage on peppers,” Roberts said. “Yield losses in severely affected crops can reach 100 percent.”

For example, the disease causes severe defoliation, which in turn produces a less healthy plant that won’t produce as many fruit or can reduce the fruit quality so it isn’t marketable.

With the grant, scientists will zero-in on a pathogen called Xanthomonas perforans, one of the three species of Xanthomonas that cause bacterial spot in many crops, including peppers.

In addition to Xanthomonas perforans, scientists plan to study how to minimize the impacts of  less common, but emerging pepper pathogens such as Clavibacter michiganensis. Researchers also want to make sure they build disease resistance into pepper plants, Roberts said.

As they slash the potential for pepper diseases, Roberts’ research team will try to develop ways to save money for farmers.

Researchers plan to cut growers’ costs in many ways. These include reducing spray frequency, using less diesel for the sprayer, saving on labor, buying products and other reduced costs.

“Farmers’ budgets are designed to estimate the cost of conventional production practices,” Roberts said. “The treatments we develop are expected to affect how often growers spray chemicals on their crops. Healthier plants may also require fewer  nutrients. The treatment effects and the net benefits are likely to vary by geographic region as weather, climate and prices vary.”