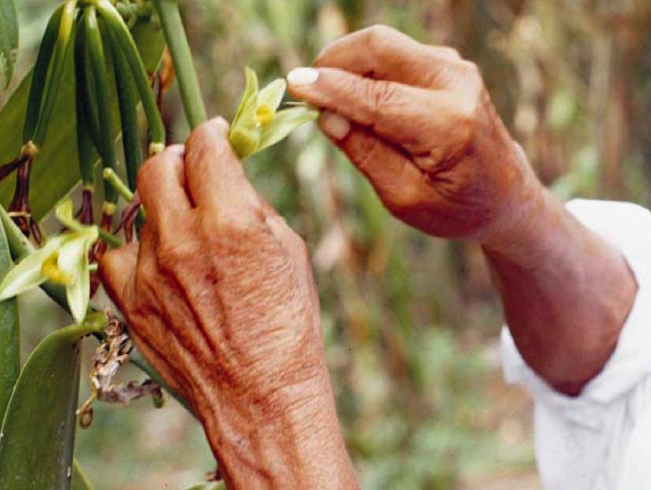 For dessert, how about a scoop of ice cream flavored with vanilla from Florida’s farmers? Because so many consumers enjoy vanilla, University of Florida (UF) scientists hope to help Florida farmers grow the bean. Manual pollination of Vanilla planifolia. Images courtesy of the Food and Agriculture Organization of the United Nations

Consumers have an appetite for vanilla. The United States leads the world in imported vanilla beans, said Alan Chambers, an assistant professor of horticultural sciences at the UF Institute of Food and Agricultural Sciences (IFAS). Madagascar grows about 80 percent of the world’s vanilla, but that island lies thousands of miles from the companies that buy vanilla beans and convert them to extract, Chambers said.

That’s all the more reason UF/IFAS wants to see if Vanilla can be grown commercially in Florida.

“Everything we could grow would be consumed,” said Chambers. “We believe the market is there. It’s got huge potential.”

“There are only a few places in the U.S. with favorable conditions to grow vanilla on a commercial scale, and South Florida is one that has several advantages,” said Elias Bassil, also a UF/IFAS assistant professor of horticultural sciences who’s working with Chambers on the Vanilla research.

Chambers and Bassil, both faculty members at the UF/IFAS Tropical Research and Education Center in Homestead, Florida, are trying to connect the genetic and physiological dots to help South Florida farmers eventually grow vanilla.

Chambers researches genetics and breeding, and Bassil studies vanilla physiology and biotechnology to understand how the plants respond to common environmental stresses.

The scientists are studying vanilla genetics so they grow the best beans. Chambers has brought over 100 accessions to his lab. Accessions are types of plant material from which a scientist can select those genes needed to produce ideal Vanilla cultivars.

“We are mining the genetic diversity represented in our collection in order to find those key genes that underlie the most important traits associated with superior quality and productive vines,” said Bassil. “We have several modern biotechnological tools at our disposal to achieve this.”

“Vanilla has global appeal, but lacks the foundational research that led to superior crops cultivars such as apples, strawberries, tomatoes, wheat and most other food crops,” Chambers said. “We don’t even know what we’ll find when we start looking for new traits and fruit qualities. Therefore, the true genetic potential of Vanilla is still enigmatic, and vanilla science could be at the very foundation of new and exciting future possibilities to delight consumers with novel sensory attributes from vanilla-based products.”

For now, those who grow Vanilla in South Florida are hobbyists.

“We have growers and homeowners interested in producing vanilla, but we don’t have scientifically validated information and accessible resources available yet,” Chambers said.

That’s why Chambers and Bassil caution that even if they can develop a vanilla bean that grows well in local conditions, farmers would cultivate it as a secondary crop.

With Vanilla, Chambers draws comparison to the origins of other UF/IFAS breeding programs.

“But we’re just getting started,” he said. He compared the scientists’ experimentation with blueberries 50 years ago or strawberry 100 years ago in Florida. “At least UF/IFAS has a history of crop establishment and supporting new, promising species.”

By Brad Buck, University of Florida Institute of Food and Agricultural Sciences