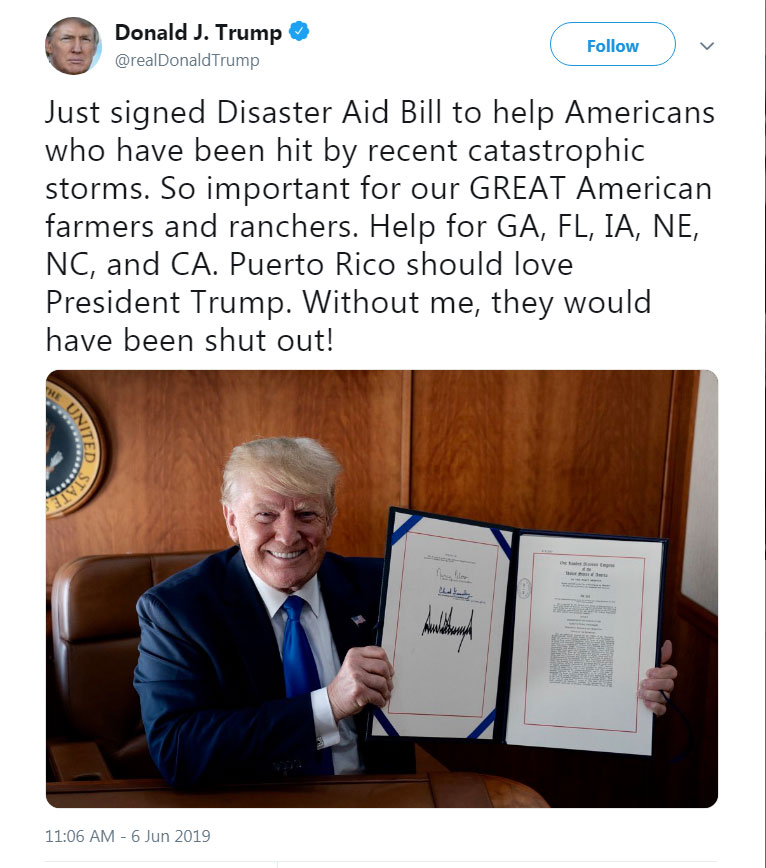 President Donald Trump on Thursday signed into law a $19.1 billion disaster-relief package that Florida officials have sought since Hurricane Michael pounded the Panhandle in October. The signing followed the U.S. House voting 354-58 on Monday to approve the measure, which passed the U.S. Senate earlier.

The package is intended to assist communities in more than 40 states impacted by hurricanes, flooding, tornadoes, wildfires, volcanic activity and earthquakes. The measure includes $4.5 billion for agriculture-related losses.

Florida’s agriculture industry lost an estimated $1.5 billion in crops in Michael, with most of the losses incurred by the timber industry. The Department of Defense will get $2.7 billion to repair and replace a number of installations, including Tyndall Air Force Base, located between Mexico Beach and Panama City. Another $1.6 billion will go to the Federal Highway Administration’s Emergency Relief Program, which includes providing additional resources for wildfire suppression conducted by the U.S. Forest Service.

The funding package was delayed for months, as Trump fought Democrats over their push for additional funding for Puerto Rico, while the president sought $4.5 billion to address migrants at the border with Mexico. In the White House statement on Thursday’s signing, the administration said it looks forward to working with Congress on funding for “Southern border humanitarian needs.”