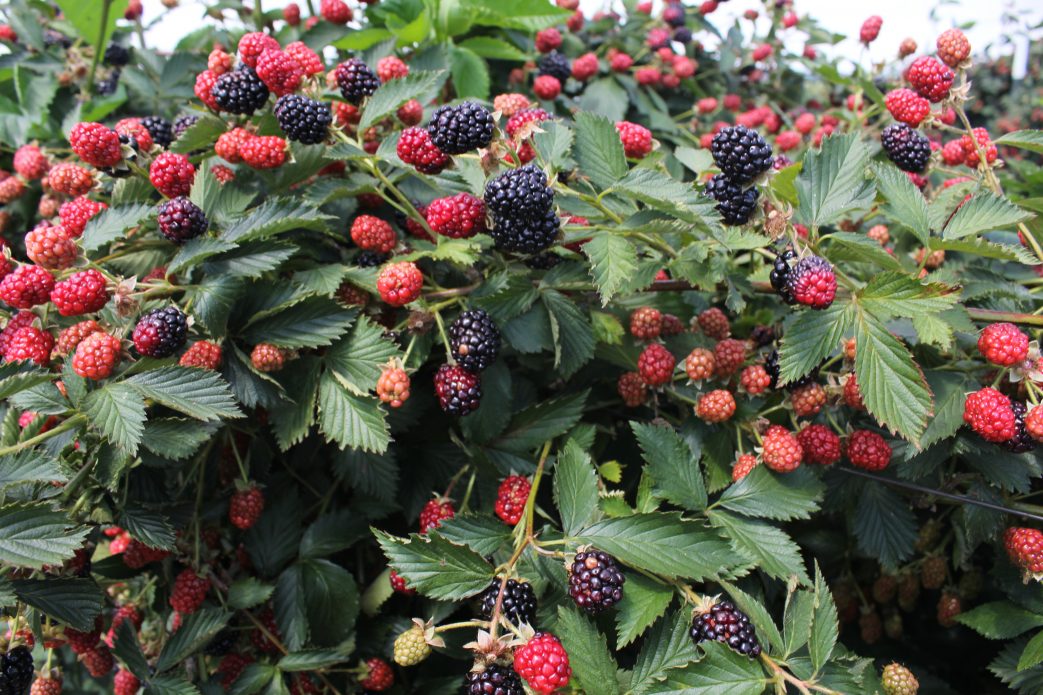 Blackberry has emerged as an alternative crop in Florida. More and more Florida growers are growing or trialing blackberries for commercial production. They have indicated a dire need for suitable blackberry cultivars that can yield well and produce berries of good quality.

PAST CULTIVARS AND RESEARCH

In the 1950s, University of Florida (UF) released two blackberry cultivars, Flordagrand and Oklawaha. Both produced high yields of large, attractive berries, but their trailing growth habit and thorny canes made them unsuitable for commercial production.

The University of Arkansas has maintained an active blackberry breeding program for more than five decades and has released dozens of new cultivars. Essentially all the blackberry cultivars currently grown in Florida and other Southeast states are from this breeding program.

With funding from the Florida Department of Agriculture and Consumer Services Specialty Crop Block Grant program, UF researchers began trialing these cultivars in 2017 in a blackberry orchard at the Gulf Coast Research and Education Center (GCREC). Prior to this, Shinsuke Agehara trialed Navaho, Natchez and Ouachita in wooden boxes and large containers. In his trials, Natchez outperformed Ouachita and Navaho. In the orchard trial, Osage had the highest yield among the five floricane-fruiting cultivars, with an average of 3.9 pounds of berries per plant. Among the three primocane-fruiting cultivars, Prime-Ark® Freedom had the highest yield, producing an average of 6.3 pounds of berries per plant.

Researchers used in-row spacing of 3 feet and between-row spacing of 10 feet in the trials. With this spacing, 1,452 plants could be grown per acre. The estimated per-acre yield would be 5,663 pounds for Osage and 9,148 pounds for PrimeArk® Freedom. Natchez showed significant variability in berry yield from year to year or site to site.

In recent years, the University of Arkansas blackberry breeding program has released two new floricane-fruiting cultivars, Caddo and Ponca. Based on release documents, both cultivars are high yielding, thornless, erect and produce medium to large fruit. Ponca is the sweetest cultivar released to date and has good shipping and handling traits. Both cultivars have been introduced to Florida, and a new trial is being set at GCREC to test their performance. Stay tuned for trial data in the next two years.

In small trials conducted in Arkansas, these cultivars had the potential to produce 10,000 to more than 20,000 pounds of berries an acre. Why do these cultivars yield much less in Florida? Researchers think the primary reason is that chilling requirements were not met in Florida, especially in Central Florida. Very much like blueberries, blackberries need a period of chilling (temperature below 45° F) to break sufficient numbers of buds and develop enough flowers so that growers can have a decent crop.

The current blackberry cultivars grown in Florida were bred and initially selected in Arkansas, and they need 300 to 900 hours of chilling. On average, Central Florida only has about 100 to 300 hours of chilling. Without enough chilling, blackberry plants break much fewer buds, have much fewer fruiting laterals and flowers, and yield poorly with berries ripening over an extended period.

UF trials and growers’ experiences indicate a strong need for new blackberry cultivars that are better adapted to a low-chill environment. This need prompted UF researchers to breed blackberries. The breeding program received private funding and technical support from Coastal Varieties Management. The GCREC and the UF Institute of Food and Agricultural Sciences (IFAS) Dean for Research Office provided funding to cover expenses associated with facilities.

In spring 2015, UF researchers made the first batch of crosses to produce blackberry seeds. Newly produced seeds were treated with a strong acid to burn part of the seed coat and then they were kept cold for several months before they were germinated. The seedlings were then grown and selected in Florida. Researchers repeated this process each year since then.

So far, more than 10,000 blackberry seedlings or young plants have been screened in Florida. Dozens of plants were selected for further trials. Shoot tips have been collected from some of the most promising plants and cultured in test tubes for rapid propagation. The first batch of tissue culture-propagated blackberry young plants from one of the selected lines was sent to growers this past June for trialing.

In the meantime, researchers have set up the first replicated trials to test the new line’s berry yield and quality. Effort is being made to expand the blackberry orchard and produce additional liners for more field trials, which is warranted to select the best adapted cultivars for Florida growers.

As more Florida growers begin growing blackberries, they have more questions needing practical solutions. To better address growers’ needs, a UF/IFAS research and Extension team has been formed. It consists of six specialists from the GCREC and the Horticultural Sciences Department and two Extension faculty from Orange, Marion and Hillsborough counties. Team members are well experienced with berry breeding; variety selection and trials; plant management and manipulation; fertilization; disease, insect pest, nematode and weed identification and control, etc. The team has received great support from Florida growers and some seed funding from the UF/IFAS Support for Emerging Enterprise Development Integration Teams program and the GCREC.

UF plans to produce the first blackberry production and spray guide by early 2022 and provide growers and Extension agents with more training. The goal of the team and these efforts is to facilitate the development of the Florida blackberry industry and help growers produce profitable crops sustainably.