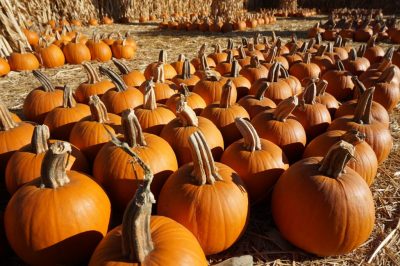 A visit with longtime squash and pumpkin breeder Theodore “Ted” Superak provided some history of pumpkin breeds. Superak started breeding in the 1970’s when the first major improvement was the ‘Howden’ variety. This became the basis for future developments. The 1980’s saw an increase in variety development when pumpkins called Jackpot, Munchkin, Wizard, Mystic, and Sorcerer emerged. Then more varieties were developed in the 1990’s and 2000’s, including the first powdery mildew resistant varieties called ‘Merlin’ and ‘Magic Lantern’.

Superak said big chain stores look for uniformity, what he called a ‘cookie-cutter’ approach, and more unique varieties are better suited for roadside stands. He noted that three-quarters of the California crop go to retail stores while the other quarter goes to patch sales, and HM.Clause has 60.8 percent of the global market of pumpkins.

It’s safe to say that San Joaquin County is the biggest producer of ornamental pumpkins. Van Groningen & Sons is an 80-year operation in Manteca that grows over 35 varieties of pumpkins on over 1400 acres, among many other crops. “San Joaquin County produces 80 to 85 percent of all of the pumpkins that are sold in California,” Van Groningen & Sons VP of Crops and Soils Bryan Van Groningen said. “We’re in a perfect growing region as far as weather, climate, and soil.”

Most of the pumpkins in California are grown for ornamental use, meaning for decorations and carving. Van Groningen says that is why they grow so many different varieties and are constantly looking for something new that might catch the consumer’s eye. “We do about a half-acre trial every year with as many as 50 different varieties…We get a good look at each variety and then we can make a decision on if we want to advance it or not.” Van Groningen added that they have seen substantial growth in the ornamental pumpkin business over the last 15 years. He speculates disposable income increases and general pumpkin popularity has helped fuel that growth.

So where do all of those ornamental pumpkins go? A lot go to pumpkin patches of course. One of the bigger operations on the tour was Dell’Osso Family Farms Pumpkin Maze in Lathrop. A pumpkin amusement park now occupies land that was farmed for tomatoes, row crops, alfalfa, and melons. Most of the land is used to entertain about 350,000 people in the month of October alone. The park offers a corn maze, train rides, haunted castle, slides, games, small kid zones, pig races, gem mining, pony rides, zip lines and more. Although they don’t grow most of the pumpkins they sell, they move over 30,000 pumpkins in the month of October. Dell’Osso Family Farms is an all-day experience and owners say lots of Bay Area families make the trip every year. One of their more popular attractions, of course, are pumpkin blasters. Visitors can fire mini-pumpkins at targets out of a compressed air cannon.

On the other side of the spectrum is a small, yet well-known roadside stand in San Martin. Crates of odd looking pumpkins and squash litter the front of LJB Farms, a family-owned business peddling food just off Highway 101 for over four decades. “My brother and I started it back in 1976 or 1978. We were selling pears on a table out in front,” Ranch Manager Russ Bonino said. The stand sells sweet corn, tomatoes, many varieties of squashes, zucchini and much more. In October, a hay-lined pumpkin patch displays their many different varieties. “Between the pumpkins, jack-o-lanterns, decorative ones and all, I would say 15 to 20 different varieties,” Bonino said. “I’d say probably 90 percent go to straight decoration.” One of the more eye-catching varieties is what LJB Farms calls ‘Peanut Pumpkins’, which looks as if someone glued peanut shells to the outside of a cloudy-orange pumpkin.

Bonino said he sells a lot of the ‘Cannonball’ variety which is popular with school groups. “They’re about a four and a half to a five-pound pumpkin. It’s uniform across the board, has a nice stem on them so the kids can pick them up and run with them and it makes it easier to carry on the bus or to take home after school,” Bonino added.

Somewhere in the middle of the spectrum between LJB Farms’ roadside stand and Dell’Osso’s amusement park lies two locations for Uesugi Farms. The operation has the smaller Spina Farms Pumpkin Patch in the Coyote Valley just south of San Jose, and the larger Uesugi Farms Pumpkin Patch in San Martin. Both locations have attractions for children and families. Farm Manager John Spina runs the smaller of the two patches and said adding the entertainment has been necessary to compete. “Back in the day, we would plant a field of pumpkins…leave them on the vine…make a parking lot for the people and they would come get their pumpkins. Just a much simpler time,” he said. “Now it’s different. To bring the people out, you have to add the pony rides, the train rides, the hay rides.”

Both locations have an educational element to the patch and it truly is an agro-tourism industry. “There is a million people right here in San Jose and this is as close as they’ll get to it. Just coming out here is an experience for them,” Spina said. Along with the rides, children learn how to plant and grow a pumpkin. Spina said teaching children where their food comes from is important. “On the ag side, we are so busy just trying to produce a crop that it’s tough to bring the public out, show them what we are doing and why we need to do certain things,” he said.

Uesugi Farms General Manager Pete Aiello runs the larger pumpkin patch in San Martin. They also incorporate education while marketing to school groups. “We kind of meld the two elements of fun and education,” Aiello said. “The kids watch a video about pumpkins and how they’re grown…we take them on a train and hayride, send them home with a small pumpkin and it’s a big hit.” Uesugi Farms Pumpkin Patch hosts approximately 20,000 school group kids in October. Another big draw for kids of all ages at Uesugi farms is the pumpkins on display that is the size of a Volkswagon Beetle. The patch became a sanctioned weigh-in site for The Great Pumpkin Commonwealth. In 2013, Aiello said they weighed the world record pumpkin at over 2,000 pounds. “It’s quite a photo opportunity we’ve noticed. When we do the competition, there are hundreds of people here with media,” he said. “When it’s done, they all line up to take pictures…I think it’s helped put our place on the map a little more.” This year’s heaviest pumpkin at Uesugi Farms weighed in right at 2,000 pounds.

Stay with AgNet West for videos from Spina and Uesugi Farms pumpkin patches.