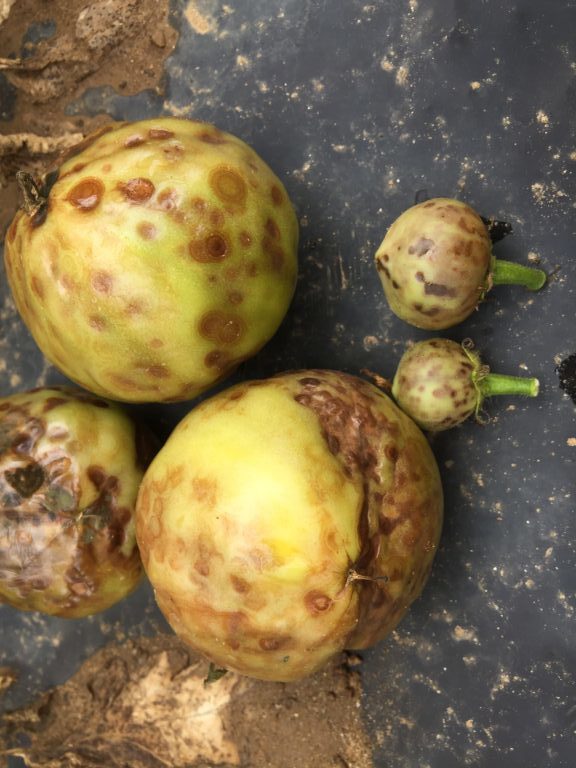 “In some parts of North Carolina, we’ve had quite a bit of tomato spotted wilt, but a lot of that is related to thrips activity,” Meadows said. “I think it’s a combination of a mild winter plus the warm and dry spring that really allowed them to take off. Farms that have a resident population of the virus in their weed host, that’s where we see the worst part of it.

Jim Walgenbach, N.C. State professor and Extension entomologist, confirmed the high populations this year but stressed that thrips have been increasing the past few years.

“Western flower thrips, in particular, have been very high this year. They have been, in many locations, very difficult to control as well,” he said. “If we could control the vector, it would be a little bit simpler. You’ve got primary spread which is the initial spread into the field early in the season. That’s generally before western flower thrips are out there. That’s often done by a different species, usually the tobacco thrips. They usually die down once we get into the warmer months. That’s when western flower thrips take over. The inability to control them has really resulted in a lot of transmission from plant to plant within the field. That’s where we’ve seen a big increase this year.”

Unfortunately for producers, there are few viable options to control thrips and, ultimately, TSWV.

“It’ll reduce the plant growth and therefore reduce yield. But it can also cause the fruit to be misshapen and cause uneven ripening. Then they become unmarketable,” Meadows said.

Meadows said there is no cure once a plant is infected. Producers can implement management options to minimize the virus risk in the future. They can manage how many weeds are around the greenhouse. They can also also manage the thrips themselves. Maybe the most effective method, though, is to use disease-resistant varieties. But that option could soon be in danger, however.

“The resistance for spotted wilt is based on one gene. In California they do have a resistance breaking strain of spotted wilt virus that overcomes that resistance. As far as we know we don’t have it here in North Carolina and as far as I know on the east coast in general. But everyone’s concerned about it, because that’s the only resistance we have for spotted wilt. We hope it doesn’t show up of course, but it is something to watch out for,” Meadows said.