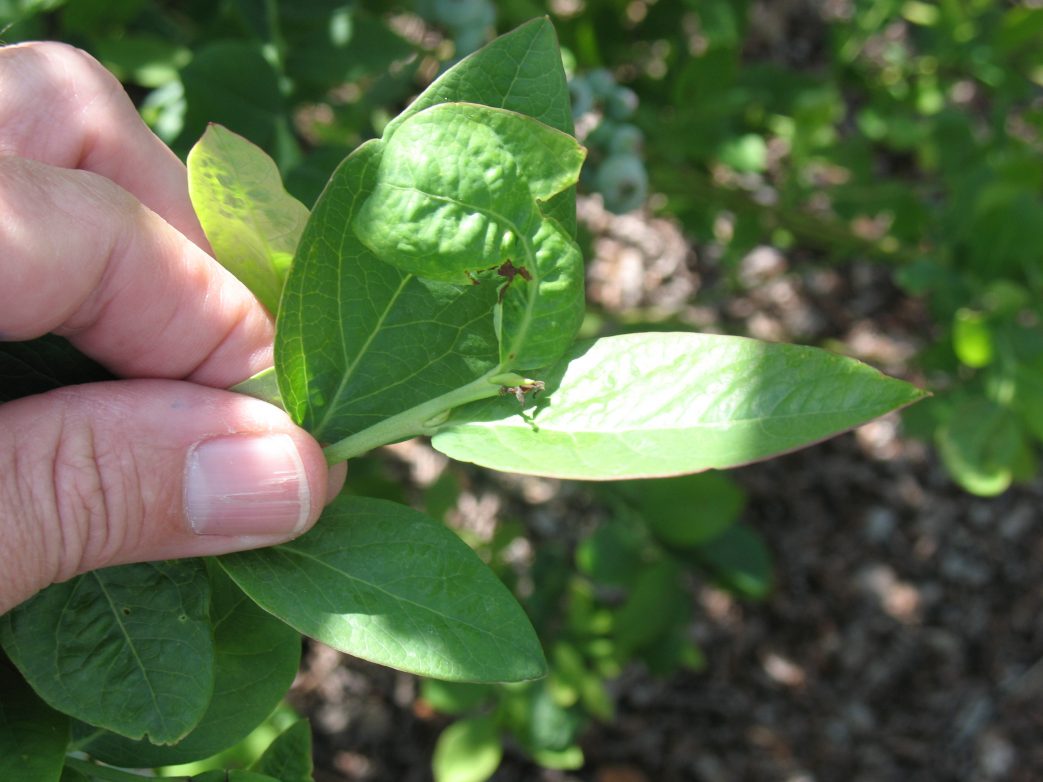 By Oscar Liburd and Doug Phillips

Blueberry gall midge is a small fly that feeds on the floral and vegetative buds of blueberries. Reports of gall midge damage on blueberries grown in Florida have become more common in recent years. In cases where there was severe feeding injury to floral buds, the midge can significantly affect yield.

There are two species of midge, Dasineura oxycoccana and Prodiplosis vaccinia, found in Florida blueberries. The species are similar in size but look slightly different (Figure 1A and Figure 1B). The adult gall midge is small, reaching a size of 2 to 3 millimeters. Adult midges live for only two to three days.

D. oxycoccana becomes active when temperatures exceed 60°. Mild winters with cool and warm spells may result in higher activity. Adults become active in late fall (November to December). Peak activity appears to be in January through March, when the pest feeds primarily on leaf and floral buds.

P. vaccinia is more of a late spring/early summer species and is active from late March to mid-summer (July), when it feeds primarily on leaf buds. Adult females lay as many as 15 eggs per bud, typically just after bud swell when scales begin to separate. Eggs hatch in two to three days, and the larvae begin to feed inside the buds, maturing in eight to 10 days. The larvae then drop to the ground to pupate in the soil and emerge as adults.

During harvest, midge populations may decrease, due to sprays for other invasive pests such as spotted wing drosophila and blueberry maggot. Also, during this time, there are fewer developing floral and vegetative buds. Following postharvest pruning and the first new flush of growth, midge populations can increase but they tend to be lower than spring and fall populations.

Although some remaining populations of D. oxycoccana are present from April to July, the dominant species is P. vaccinia, which feeds primarily on leaf buds, while D. oxycoccana attacks both floral and leaf buds. There can be as many as six generations of gall midge per year in Florida (three in the spring, two in the fall and one in early summer).

Gall midge larvae feed on floral bud tissues, causing necrosis, brown lesions and bud abortion (Figure 2). When there is heavy gall midge damage to floral buds, the bloom will typically be lighter since many of these buds will abort, resulting in decreased fruit set.

On vegetative buds, feeding by gall midge larvae results in distorted and malformed leaves, often with a blackened bud tip as the new foliage starts to emerge (Figure 3).

Gall midge larvae are difficult to kill with contact insecticides since they develop and feed inside the buds. Insecticide applications must be timed to control adults before they lay eggs, which requires careful monitoring. Clear sticky traps hung in blueberry bushes close to the ground can be used to monitor adults (one to three traps per acre). Alternatively, a white bucket trap with a sticky plexiglass top placed under bushes in direct contact with soil or pine bark can detect new adults emerging from the ground (three to five traps per acre).

Recommended chemical controls should be used when there are two or more adults present in the traps. If traps are not used for monitoring, preventive spray applications can be made. The first application should be made right before floral bud break, with a second application 10 days later. At a minimum, monitoring for larvae should be done by placing young stems with buds into a zip-lock plastic bag at room temperature. Mature orange larvae will begin to emerge after three to four days if present in the buds.

Recent insecticide evaluations have indicated that Exirel®, Movento® and Malathion® were effective in reducing adult populations. Larval populations were reduced with Assail®, Movento® and Exirel®. Delegate® is typically used for gall midge management during or near bloom time. Please read the label and follow all directions for restrictions, rates and frequency of application.

Oscar Liburd is a University of Florida Institute of Food and Agricultural Sciences (UF/IFAS) professor in Gainesville. Doug Phillips is a UF/IFAS blueberry Extension coordinator at the Gulf Coast Research and Education Center in Wimauma.