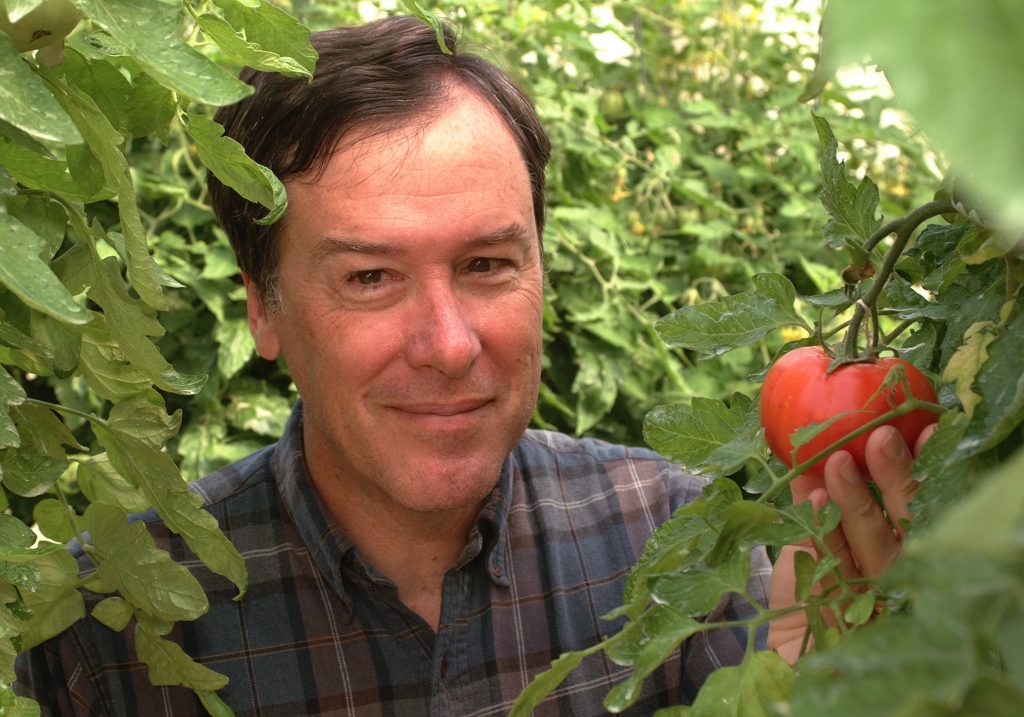 GAINESVILLE, Fla. — Imagine sinking your teeth into a fat, bright red tomato, whose aroma promises a tantalizing treat. Instead, you realize you got a great looker, but not a great taster. That’s because the consumer has been left out of the breeding process.

For 20 years, Harry Klee, a professor of horticultural sciences at the UF Institute of Food and Agricultural Sciences, has been using genetics to improve flavors and smells in tomatoes and other produce that induce the consumer to buy more of them.

As Florida farmers continue to harvest this year’s tomatoes, Klee urges researchers to try to make sure those tomatoes – and other crops – tempt taste buds.

“The consumer has largely been left out of the development of new crops,” said Klee. “While the economics of the current system are focused on the cost of production, leaving the consumer out of the scheme has resulted in products that are not appealing to consumers.”

It’s not that scientists don’t want to breed for flavor, Klee said, but there is very little information that bridges knowledge of the chemistry of flavor back to genetics.

Klee penned his thoughts for a new article in Nature Reviews/Genetics. His piece builds upon progress made in breeding for flavor in tomatoes, examines the state of the field in other fruit crops and speculates on what the future holds for flavor improvement in popular fruit crops.

“The path that we lay out involves using consumer panels to define what chemicals in a fruit make consumers like or not like the fruit,” Klee said. “Once you have that information, you go to the next step, which is to define the genes that control synthesis of those important chemicals. Once you know the genes, you move on to which alleles – or versions — of those genes are the best ones and which ones are missing in a variety.”

Then scientists use molecular markers that permit them to precisely improve flavor without negatively impacting the traits that are valuable to farmers.

Last year, in a study published in Science, Klee and colleagues worldwide identified chemicals that contribute to tomato flavor. Their first step was to find out which of the hundreds of chemicals in a tomato contribute the most to taste. Modern tomatoes lack sufficient sugars and volatile chemicals critical to better flavor, and many consumers think they taste bland, he said.

To help, researchers studied alleles. Klee likened the concept to the genetic makeup of humans. Everyone has the same number of genes in their DNA, but a particular version of each gene determines traits such as height, weight and hair color. In the same way, alleles determine the capacity of the fruit to make the flavor chemicals.

It will take time to move all the desirable flavor alleles into an elite modern variety such as Tasti-Lee, a popular UF/IFAS-developed tomato, Klee said.

“You need to improve flavor but not compromise all the hard-won gains that breeders have achieved in yield, disease resistance, ability to ship, etc.,” he said. “Farmers will grow a better-tasting tomato if someone can deliver it in a package that doesn’t compromise what they get paid for.”

Tasti-Lee is a good example where a variety with better flavor very quickly gains consumer acceptance, Klee said. If you make a product that tastes substantially better, more people will purchase your product.

“We think we can do even better,” he said. “The Science paper set out a roadmap for how to improve flavor. This review summarizes that knowledge and pulls together work done on other crops besides tomato.”

By Brad Buck, University of Florida Institute of Food and Agricultural Sciences.