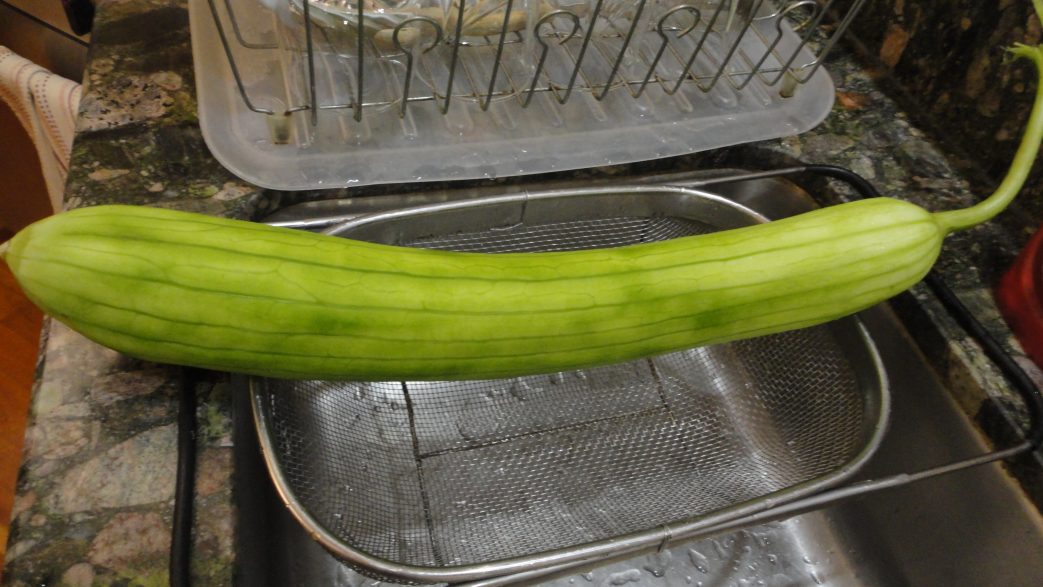 This emerging Asian vegetable is one to watch in Florida. Figure 1b. The fruit of angular luffa. Photos by Guodong Liu, UF/IFAS.

Luffa is a genus of tropical and subtropical plants in the cucumber family (Cucurbitaceae). Native to Asia, particularly in China and Vietnam, luffa is cultivated for its immature fruit, which is consumed as a cooked vegetable (Figure 1). Mature luffa is known for its fibrous interior property, which can be used as a bath sponge for cleaning and scouring (Figure 2). The gourd has recently emerged as an attractive commodity in U.S. vegetable markets, especially at Asian grocery stores in New York, California and Florida.

Some U.S. vegetable growers are moving toward the production of Asian specialty vegetables such as luffa, long squash, bitter gourd and long beans as a way to reap higher profits compared to some conventional vegetables, such as potatoes (Kshitij et al., 2015). While these efforts are creating a niche market, they are also an opportunity to diversify food choices for all and create healthy competition in the industry. Luffa production, in addition to maximizing the grower’s profitability by selling the sponge product and contributing to Florida’s food diversity, can improve consumers’ health. Luffa fruits are very useful in treating asthma, skin disease and some internal problems like rheumatism, backache, chest pains and hemorrhoids (Partap et al., 2012). Since luffa is enriched with many important medicinal constituents supplemented with phosphorus, potassium, vitamin A, vitamin C, and flavonoids, of which those functional components have pharmaceutical activities, it’s a vegetable with high nutritional and medicinal significance (Partap et al., 2012).

Luffa seeds contain considerable amounts of polypeptides like luffins and luffacylin (Parkash et al., 2003). These physiologically active compounds have pharmacological effects such as anti-inflammation, anti-fungus, anti-allergy, anti-asthma and anti-tussive properties (Partap et al., 2012). Evidence shows that luffa has excellent diuretic characteristics and serves as a good antihyperglycemic and hypoglycemic in mice (Manjusha et al., 2011). Based on the aforementioned facts, it is clear that luffa is a highly nutritional and health-promoting vegetable.

LUFFA IN FLORIDA
Florida’s unique geography and humid subtropical climate are highly suitable for successful luffa production, even in the winter season. Luffa production in Florida and transportation of its commodity to other regions of the country could be an economic advantage for the state.

Currently, luffa production is increasing steadily. The main targeted market is the Asian groceries, and the major consumers are people of Asian origin who are accustomed to eating this vegetable. To understand the acceptance and popularity of luffa among a wider population of residents, more studies are needed. Awareness seminars to promote the cultivation of luffa in home gardens are also necessary. Therefore, a consumer taste panel study to survey 1) the awareness of participants’ knowledge of luffa and 2) the potential market for luffa in the United States was conducted in November 2016 at the University of Florida (UF) in Gainesville.

Survey responses from volunteers in the population of students, professors and staff in the Horticultural Sciences Department were recorded.

MATERIALS AND METHODS
Immature luffa fruit was peeled and cut into small slices and then cooked with a little olive oil and seasoned with soy sauce. For cooking, 1 pound of sliced luffa fruit was boiled with 2 fluid ounces of water for 2 to 3 minutes, and 1 teaspoon of salt was added (Figure 3). Figure 3a. A peeler is useful for peeling luffa fruit. Photos by Guodong Liu, UF/IFAS

Overall, 31 people participated in the taste panel. They received a cup of luffa dish and were asked to answer six questions with a score from 1 to 5 (1 = 0 points, low; 2 = 25 points, a little; 3 = 50 points, medium; 4 = 75 points, moderate; 5 = 100 points, high). The following were rated by the participants: a) knowledge about luffa, b) skills in cooking luffa, c) rating of the prepared luffa dish, d) interest in learning how to cook this vegetable and e) interest in growing the crop. The participants were also asked whether this was their first time tasting luffa. The total scores of the first five questions were calculated for the survey respondents. Score ranges from low to high represented the respondents’ interest or knowledge about luffa as follows: <150 (relatively low), 150 to 250 (medium) and  >250 (high). Overall, the surveyed group had high curiosity and intention to learn more about luffa, including its production and cooking methods.

RESULTS
Seventeen out of 31 people surveyed did not have background knowledge of luffa, and none of them had very profound knowledge of luffa. Moreover, 70.9 percent of the tasters did not have skills in cooking luffa, and for 80 percent of them, this was their first time tasting luffa. Twenty-eight out of 31 respondents have, at least, medium interest in learning how to cook luffa, and 25 out of 31 participants had an interest in growing the luffa crop in their home gardens. The taste of the luffa dish ranked above medium in terms of the consumers’ preference. Results showed that 71 percent of the people surveyed had medium interest in luffa, while another 22 percent of the respondents were highly interested in learning more about luffa.

DISCUSSION
Because the consumers surveyed were from the UF Horticultural Sciences Department, this population can be considered to be knowledgeable about unusual edible plants. However, more than half of the people surveyed did not know anything about luffa or how to cook it. This suggests that more efforts are needed to popularize this vegetable in Florida. Furthermore, even though people did not have knowledge about luffa before, more than two thirds of them started to gain interest in learning how to cook luffa or grow their own luffa in their backyard after tasting it, showing that luffa fruit has the potential to get into the American local fruit and vegetable market. There is a need to conduct awareness seminars to disseminate the nutritional importance, cooking recipe and cultivation technology of luffa, both in urban and rural areas of Florida.

PERSPECTIVE
Currently, luffa consumption and production are primarily for ethnic vegetable markets in large cities in the United States. Florida has the advantage of being able to supply luffa year-round. However, approximately 80 percent of the survey participants from Florida do not have any knowledge or skills in cooking luffa, indicating that local people seldom realize the value and potential of this Asian vegetable. Based on the taste scores, luffa has, at least, medium interest for 93 percent of the participants.

Moreover, 80 percent of respondents reported to have relatively high interest in learning how to cook and grow these vegetables after tasting the luffa dish. Therefore, more advertisement and information seminars need to be done regarding the methods to cook and produce luffa, since it has the potential to join the U.S. vegetable market and compete with other locally grown vegetables.

Yucong Xie is a graduate student, Guodong Liu is an assistant professor and Extension specialist, Bala Rathinasabapathi is a professor, and Muhammad A. Shahid is a post-doctoral associate — all in the Horticultural Sciences Department at the University of Florida in Gainesville.