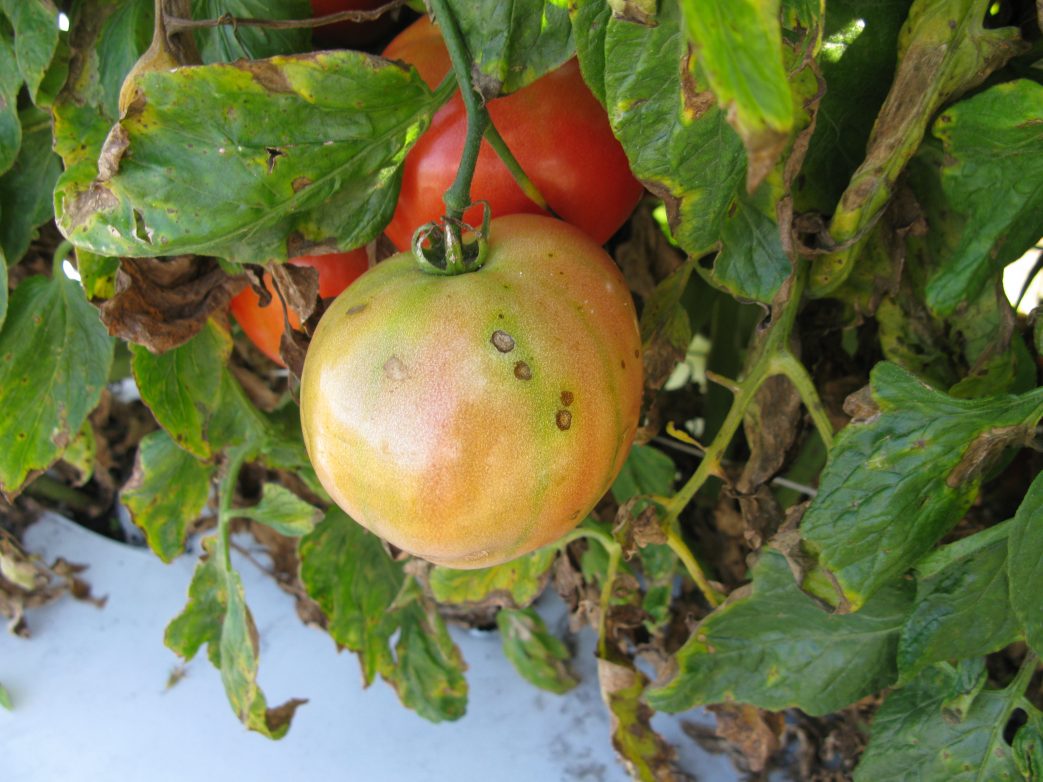 Alarming levels of fungicide resistance have been detected among isolates of the pathogen that causes target spot on tomato in Florida. Fresh-market tomatoes are a valuable crop for Florida and are vulnerable to a number of fungal diseases. However, few fungal diseases have caused as much grower concern over the last six years as target spot, caused by Corynespora cassiicola.

The disease was first described on tomato in South Florida in 1967. Target spot was not considered an economically important fungal disease, since it was less severe on newer varieties and managed with the same fungicide programs used for gray leaf spot at the time.

Although breeding efforts in the 1970s did identify some sources of resistance to target spot, this resistance was never incorporated into commercial varieties. Interestingly, these prior sources of resistance were not effective against recently collected C. cassiicola isolates in seedling assays, suggesting a change in the pathogen population.

SYMPTOM IDENTIFICATION
Target spot can affect all foliar tissues and fruit. Early foliar symptoms consist of small, dark-brown necrotic lesions with darkened margins. As lesions expand, they develop distinct concentric rings with a pronounced tan to dark-brown center, and will often coalesce with other lesions leading to blighting and premature defoliation (Figure 1). It is important to note that early foliar symptoms of target spot can resemble those of bacterial spot or other fungal pathogens. Symptoms can vary depending on the tomato variety, leaf age and C. cassiicola isolate.

Fruit lesions typically begin as small, brown, sunken, necrotic flecks with darkened margins. Lesions are most prevalent on interior fruit or on the protected side of the fruit facing the interior of the plant. These small lesions can expand rapidly as fruit ripen, resulting in large sunken lesions with concentric rings and often with noticeable dark-gray to black fungal growth in the very center (Figure 2). Fruit lesions can be extremely problematic for fresh-market tomato growers, since lesions that expand while ripening often develop a postharvest rot during shipping. DEVELOPMENT AND DISTRIBUTION
C. cassiicola is considered a widely adapted pathogen infecting over 500 plant species, but the infectivity of most isolates is limited to a few plant hosts. In addition, isolates can survive as epiphytes and saprophytes of other plants. C. cassiicola is mostly considered a plant pathogen of tropical and subtropical regions.

Disease development is typically associated with moderate to high temperatures (70 to 90 F), high humidity and prolonged periods of leaf wetness (16 to 44 hours). These specific environmental parameters likely limit the distribution of C. cassiicola in the Southeast. They also help explain disease progression in tomato fields. Figure 2. Fruit exhibiting pinpoint and larger lesions of target spot on the side of the fruit that was facing the canopy.

Target spot begins on older leaves at the bottom of the plant and progresses upward through the center of the tomato canopy, often unnoticed (Figure 3). The traditional system of upright staking and tying results in a dense tomato canopy that allows foliage and fruits to remain wet for the prolonged periods of time necessary for foliar disease development. This also accounts for the prevalence of fruit lesions on the interior or on the protected side of fruit, since these are the areas that remain wet the longest following rain, fog or heavy dew.

RESISTANCE ON THE RISE
Although broad-spectrum, contact fungicides were typically effective against target spot, the introduction of quinone outside inhibitor [QoI; Fungicide Resistance Action Committee (FRAC) 11] and succinate dehydrogenase inhibitor (SDHI; FRAC 7) fungicides greatly improved the management of target spot and other fungal diseases beginning in the late 1990s. Both groups of fungicides specifically inhibit key enzymatic processes within fungi that are critical for respiration, but also put these fungicides at a high risk for the selection of resistant fungal pathogens. Figure 3. A demonstration of improved target spot control on tomato with an effective fungicide program (left) versus the non-treated control (right), based on observed defoliation and the number of dropped fruit.

Funds from a Florida Specialty Crop Block Grant, administered through the Florida Specialty Crop Foundation, supported a survey of C. cassiicola isolates from commercial tomato production regions throughout Florida. A collection of 123 C. cassiicola isolates from seven counties were evaluated for sensitivity to QoI and SDHI fungicides. Based on lab assays, nearly 90 percent of the isolates were determined to be resistant to the QoI fungicides azoxystrobin (Quadris) and fenamidone (Reason), with QoI-sensitive isolates distributed throughout Florida.

Growers are advised to avoid the use of QoI (FRAC 11) fungicides and to limit the use of SDHI (FRAC 7) fungicides, which should be rotated or combined with other effective fungicides available, such as those containing mancozeb (FRAC M3), chlorothalonil (FRAC M5), difenoconazole (FRAC 3), flutriafol (FRAC 3), cyprodinil (FRAC 9), pyrimethanil (FRAC 9) and fludioxonil (FRAC 12). Continued research efforts to characterize fungicide resistance, pathogen diversity and environmental factors related to disease development will further improve management recommendations, as well as accelerate current resistance-breeding efforts in the University of Florida Tomato Breeding Program.

Gary E. Vallad is associate professor and associate director and Samuel Hutton is assistant professor with the University of Florida Institute of Food and Agricultural Sciences Gulf Coast Research and Education Center in Wimauma.