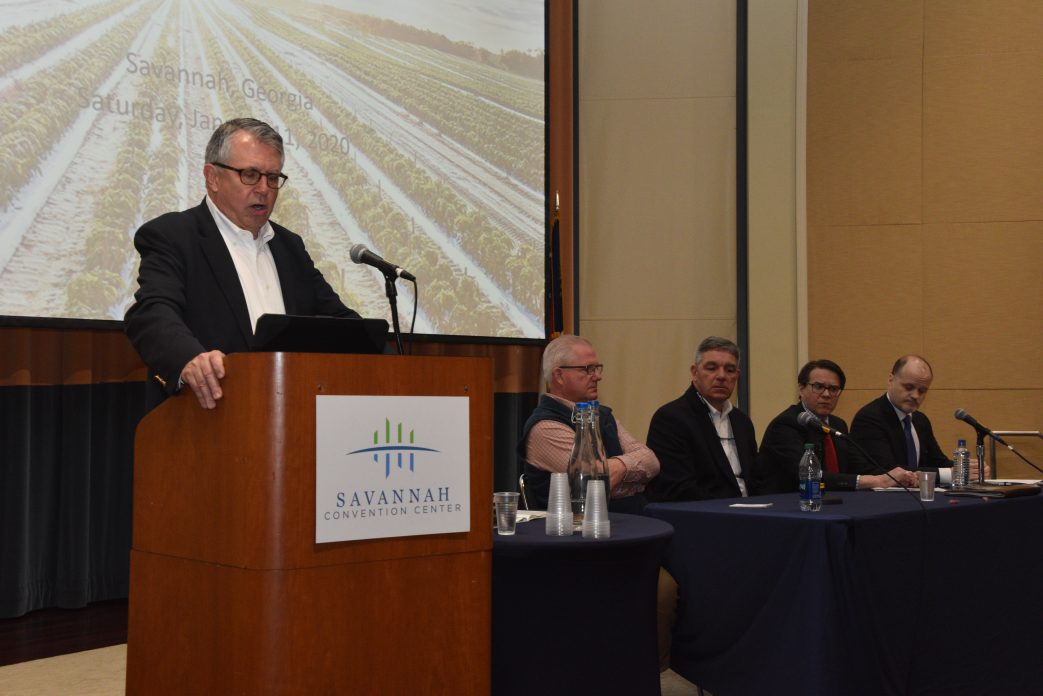 The idea of fair trade doesn’t exist for Georgia blueberry farmer Jerome Crosby. He’s hoping something can be done to rectify the situation to ensure long-term sustainability for fruit and vegetable producers.

Crosby, who produces 350 acres of blueberries in Willacoochee, Georgia, was a guest panelist during a session held at this year’s Southeast Regional Fruit and Vegetable Conference in Savannah, Georgia. The panel discussion centered on potential strategies that Crosby and other growers can utilize to better take advantage of world trade.

“The importance of the discussion today is it’s the beginning of a process whereby we might have the ability to influence trade that affects our industry, not only in blueberries but in fruits and vegetables as well,” said Crosby, who serves as chairman of the Georgia Blueberry Commodity Commission and president of Georgia Berry Exchange.

A main concern for Crosby is the lack of an even playing field for American farmers and their contemporaries from other countries, specifically with respect to labor prices.

“I’m required by H-2A to pay a visa worker $11.13 an hour. In Mexico, that same worker would be paid $1.50 an hour to pick blueberries, or $15 a day. Their labor cost is 90 percent less than ours. That alone kills our market,” Crosby said. “They can sell and make money at a price that’s below our cost because they operate with such cheap labor. It is unfair to use ‘slave labor,’ for lack of a better word, to come sell on top of my blueberries and drive me into an unprofitable position. For those reasons, we need to renegotiate our trade deals and do things to help protect our American farmer.”

Crosby employed approximately 200 workers to handpick his blueberry crop in previous years. He plans to mechanically harvest his crop in an effort to save money this growing season.

“I have no idea how it will turn out. It could be a (game changer) or it could be a train wreck. Either way, I get to pay for it,” Crosby said.

Crosby is not alone in his assessment of trade on the world stage. Bob Redding, who works for the Redding Firm and serves as a lobbyist for agricultural groups in Washington, D.C., moderated the panel discussion. He believes labor and regulations are two key components of unfair trade.

“What we’re after on the political side is to try to level that playing field a little more. I think that’s been a clear message by the President; not only with his efforts with the USMCA (United States-Mexico-Canada Agreement) but China and others to help us,” Redding said. “This part has been painful for us. The growth and product from Mexico coming to the U.S. has been exponential, and it’s taking its toll. We’ve got to find a way to cure it, or we’re going to lose an industry.”