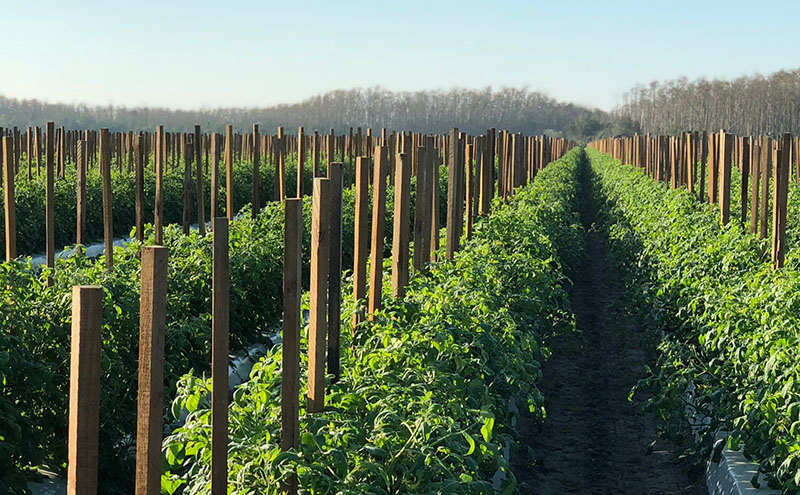 Vegetable and strawberry growers have long relied on soil fumigants to contend with various soilborne pathogen and pest complexes, as part of an integrated management strategy that includes crop resistance, cultural control and pesticides. However, with the loss of methyl bromide (MBr), many growers have struggled to maintain consistent soilborne pathogen and pest control with the available fumigants.

Much of this relates to the inability of available fumigants to disperse throughout the soil in the same manner as MBr. This is due to the physical differences in volatility, as revealed by comparing the vapor pressure and boiling points (see Table 1) of currently available fumigants to MBr and water. Volatility is the tendency of any substance to convert to a gas at a given temperature and is directly related to the substance’s specific vapor pressure, which is inversely related to boiling point.

By comparing vapor pressure and boiling point values of fumigants to water, it is easier to understand why the current fumigants are referred to as volatile liquids. Vapor pressure values for Pic and 1,3-D are on average 70-fold less than MBr at 20° C (68° F), and the ITC generators are even less volatile with physical characteristics more similar to water. MBr, as a true gas, would rapidly volatilize from a liquid once applied to the soil and quickly fill available airspace within the soil profile. In comparison, all the current alternatives remain liquid following application and then slowly volatilize. These physical characteristics limit fumigant movement within the soil of the prepared, raised bed.

Unfortunately, threats from soilborne pathogens and pests are not always limited to the immediate raised bed. For example, research previously demonstrated that supplemental applications of chloropicrin along bed edges below the tuck (Figure 1) protected tomato roots emerging from the fumigated bed into non-fumigated soils (Figure 2), which subsequently reduced the incidence of fusarium wilt (Figure 3). Similarly, research demonstrated that deep-shank soil applications of 1,3-dichloropropene (Telone) (Figure 4) were necessary to manage nematode populations deeper in the soil, below raised beds, that were beyond standard in-bed fumigant applications (Figure 5).

Raised beds prepared over the non-Telone II strips received Pic-Clor 60 (300 pounds per acre) either with or without the supplemental Pic 100 along the bed edge as additional controls. Each of the described combinations were covered with both TIF and VIF plastic mulch (for a total of 10 treatments) and then planted accordingly. Each treatment plot consisted of three beds (approximately ¼ acre) and was replicated five times in each field.

RESEARCH RESULTS
Two weeks after deep-shank applications of Telone II, deep soil cores pulled across fumigated and non-fumigated portions of the field found total nematode levels (including parasitic Meloidogyne species) were reduced by 82 percent, from an average of 8.3 nematodes per 100 cubic centimeters of soil to 1.1 nematodes. The reduced nematode counts were further reflected at the end of the season with a 97 percent reduction in root-knot galling between deep-shank Telone II and non-deep-shank fumigated plots.

Statistically, mulch had no effect on nematode gall ratings, fusarium wilt or yields. In-bed fumigation had numerical but no statistical effect on tomato yields. A replicated lab study further demonstrated the fungicidal activity of 1,3 dichloropropene (Telone II) against Fusarium oxysporum f. sp. lycopersici. Several other studies have reported similar findings for 1,3 dichloropropene against soilborne pathogens and for chloropicrin against nematodes.

CONCLUSION
These findings further support the notion of developing supplemental fumigation strategies that target soilborne pests and pathogens at their source. These supplementary approaches are meant to be prescriptive in nature, based on the specific soilborne pest or pathogen problems observed in fields.

Current and future research will address the frequency of supplemental fumigation and the use of other fumigants, as well as reducing in-bed application rates to help offset the cost of supplemental fumigation. Improvements in available post-plant fungicides and nematicides may also change fumigation strategies, as well as the availability of crop varieties with improved tolerance to soilborne pathogens and pests. Parties interested in participating in such studies are welcome to contact Gary Vallad at gvallad@ufl.edu or 813-419-6577.