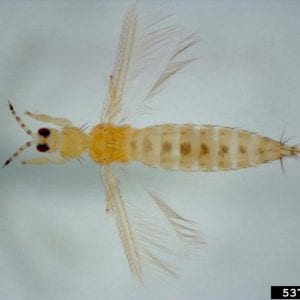 Most of Alabama has received its share of rainfall this spring. But with inclement weather, especially high winds, comes the potential for certain insect pests to be moved from field to field, says Ayanava Majumdar, Extension professor in entomology and plant pathology at Auburn University.

“If there’s any moth flights that have already begun, these storms will move these insects. Those moths that typically become mid-season pests could become an early-season pest,” Majumdar said. “If you’re getting frequent storms look for these insects moving.”

Storms have been frequent lately throughout Alabama. According to the U.S. Drought Monitor, only sporadic areas of the state are abnormally dry, mostly concentrated in the southern half. Northern Alabama has sufficient moisture.

Majumdar stresses that growers scout their fields and be on the lookout for two insect pests, in particular.

“In terms of early-season pests in open fields, look for thrips and aphid migrations at this point. You’ll especially see tomato thrips and western flower thrips. They’re the two big ones, and then in aphids there’s numerous species,” Majumdar said. “All of these small insects, like aphids and thrips, they don’t need strong winds. Even a light breeze, they will pick up and ride the wind. But the bigger ones like moths, they get moved around with the strong winds and the storms we are getting.

Majumdar also encourages high tunnel and greenhouse producers to exercise due diligence with their plants they bring into production.

“If (growers) have aphids that are breeding and don’t have wings, that means they have settled. Then they’re probably not going to leave.”

“If they’re bringing in transplants from outside, be very cautious to check for insects before they’re transplanted into a closed environment like a greenhouse. That happens a lot around this time. Farmers tend to buy their transplants somewhere else. If they’re not treated properly, they may be where the insects are hitchhiking and will get into a nice high tunnel or greenhouse and infest,” he added.