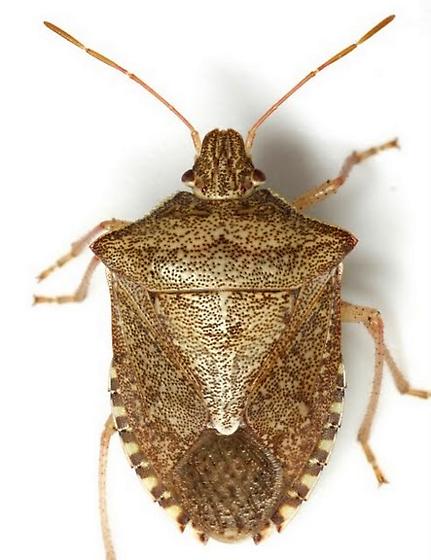 Stink bugs are a diverse species that can wreak havoc on Florida’s tomato crop. With a piercing-sucking mouthpart, stink bugs pierce the fruit and suck out fluids. They also secrete enzymes while doing so, which damages the cells right under the skin of the fruit. This leads to little spots forming all over the fruit.

It is more visible once the fruit ripens, but packinghouses can identify it on green fruit as well. Ultimately, the fruit is unmarketable for producers to sell.

But for farmers, it is important to identify what stink bug species are on their crop. Some are predators, others are minor pests, while a few can cause major economic loss. Life cycles in tomatoes can range from five to 10 weeks, which is another important reason for proper identification.

“If it’s a 5-week life cycle versus a 10-week life cycle, a producer will have to spray twice as a frequently. It’s therefore critically important to know what species it is so we can know what their life cycle is and make sure our management fits accordingly,” said Craig Frey, University of Florida/IFAS Hendry County Extension Director.

The two species tomato producers must contend with the most are the brown stink bug, Euschistus servus, and southern green stink bug, Nezara viridula.

“It was interesting to see that what I found in my master’s research in 2016-2017 correlated with what Dr. Amanda Hodges has seen in her traps over the last couple of years of surveying. There appears to be higher numbers of those two species than anything else,” Frey said.

Proper identification is key, but it is also essential to start management early and avoid playing catch-up.

Frey said stink bugs are more of an issue for grape tomatoes. Producers harvest them more frequently, and due to the required intervals between pesticide application and harvest, it is harder to find time to make an appropriate chemical application and keep the pest in check.