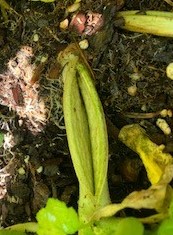 According to a recent post, over the past several weeks, lower than average temperatures have been common across Alabama. Cucurbit crops (squash, watermelons, cucumbers, cantaloupes, and other small melons) are warm season vegetable crops that can suffer damage when temperatures fall below 60 degrees F. Cold damage is cumulative and can be a challenge to evaluate as cucurbits range in their response to low temperatures. With cold damage, several days at 50 degrees F to 60 degrees F can be just as damaging as a few hours at 40 degrees F.

Stem splitting is a common symptom of cold damage on cucurbit crops and has manifested all around the state, especially in central and north Alabama. The stem of an affected plant splits at or near the soil line. The length of the split can vary but generally only appears on one side of a stem. Stem splitting is not a disease but can lead to infections.

These split areas usually heal over quickly, developing a corky appearance. Unfortunately, windy conditions have been common during this spring as well. Windy conditions combined with stem splitting can cause the plants to snap off or twist at the soil line. In addition to twisting damage, spring winds can pick up sand on lighter soils and cause a sand blasting effect on tender young plants.

Aside from cold temperatures, stem splitting can also be caused in transplants when there is a period of rapid growth resulting from high temperatures, increased irrigation or high fertility.

Growers should carefully evaluate their plants to determine the extent of any cold damage their crop might have suffered. Wilted, snapped, broken, or severely “wind burnt” plants may need to be replaced. Growers should also consider applying protectant fungicides/bactericides to reduce possible infections by opportunistic disease organisms on damaged tissues.