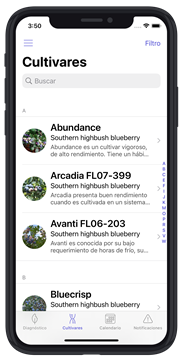 A new Spanish version of the University of Florida Institute of Food and Agricultural Sciences Blueberry Growers Guide app will benefit a plethora of workers within the industry.

“There’s a lot of growers, farm managers, field crew where English is not their first language. We saw this as a way to make the resources of the App, just more available and more beneficial to a lot more people in the industry,” Phillips said.

Users will be able to choose between English and Spanish when using the app by selecting “language” under “settings.”

Blueberries are valued around $60 million annually in Florida. Growers need to be more efficient to offset the rising costs associated with inputs and to combat increasing imports. The app helps growers scout for disease issues, manage pests, replenish any nutrient deficiencies and learn more about existing cultivars. If producers can detect problems before they become widespread, that will only help their bottom line.

“We’ve gotten a lot of good feedback from the growers on it; really across all three of the existing modules. I would probably say the most popular one out there, the one we get the most favorable comments on is the scouting guide; just to have that field scouting tool available out there so you can compare images just to try to narrow down what may be happening in the field or what may be causing some symptoms,” Phillips said.

“We’ve got a lot of good comments on that as well as some on the cultivars module. You think about growers that may be planting something new. They’ve got all of that detailed information right there on their phone in terms of yield averages and where in the state it’s best adapted to.

“I think overall (the app’s) been really well received by growers.”

Please let Phillips know what you think of the new Spanish Version of Blueberry App by emailing him at blueberryguide@ifas.ufl.edu.