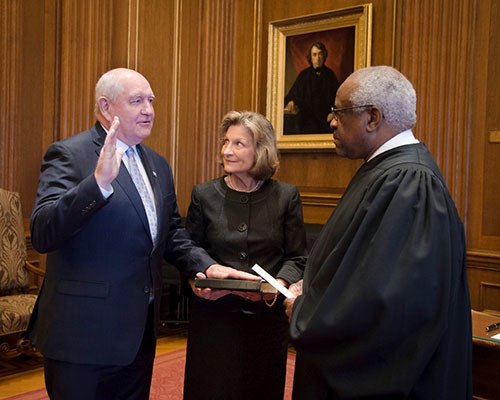 Sonny Perdue, with his wife Mary, takes the oath of office administered by Associate Justice Clarence Thomas in the U.S. Supreme Court Building, becoming the 31st U.S. Secretary of Agriculture.

(Washington, D.C., April 25, 2017) – Sonny Perdue was sworn in as the 31st U.S. Secretary of Agriculture by fellow Georgian and Associate Justice of the U.S. Supreme Court Clarence Thomas in a brief ceremony today at the Supreme Court building.  The U.S. Senate confirmed Secretary Perdue by a vote of 87-to-11 on Monday evening.  After Secretary Perdue took the oath of office, he addressed employees at the U.S. Department of Agriculture (USDA) before getting to work on his first day.  Also this morning, USDA launched his official Twitter handle: @SecretarySonny.

“The only legacy that I seek is the only one that any grandparent or parent seeks – to be good stewards, and to hand off our nation, our home, our fields, our forests, and our farms to the next generation in better shape than we found it,” Perdue said.  “Making sure that Americans who make their livelihoods in the agriculture industry have the ability to thrive will be one of my top priorities. I am committed to serving the customers of USDA, and I will be an unapologetic advocate for American agriculture.”

Perdue’s policies as U.S. Secretary of Agriculture will be guided by four principles which will inform his decisions.  First, he will maximize the ability of the men and women of America’s agriculture and agribusiness sector to create jobs, to produce and sell the foods and fiber that feed and clothe the world, and to reap the earned reward of their labor. It should be the aim of the American government to remove every obstacle and give farmers, ranchers, and producers every opportunity to prosper.  Second, he will prioritize customer service every day for American taxpayers and consumers.  They will expect, and have every right to demand, that their government conduct the people’s business efficiently, effectively, and with the utmost integrity.  Third, as Americans expect a safe and secure food supply, USDA will continue to serve in the critical role of ensuring the food we put on the table to feed our families meets the strict safety standards we’ve established.  Food security is a key component of national security, because hunger and peace do not long coexist.  And fourth, Perdue will always remember that America’s agricultural bounty comes directly from the land.  And today, those land resources sustain more than 320 million Americans and countless millions more around the globe.  Perdue’s father’s words still ring true: We’re all stewards of the land, owned or rented, and our responsibility is to leave it better than we found it.

“As secretary, I will champion the concerns of farmers, ranchers, foresters, and producers, and will work tirelessly to solve the issues facing our farm families,” Perdue said.  “I am proud to have been given this opportunity and look forward to rolling up my sleeves and getting to work as we continue to move the USDA and our nation forward.”

Upon nominating Secretary Perdue in January, President Donald J. Trump said, “Sonny Perdue is going to accomplish great things as Secretary of Agriculture. From growing up on a farm to being governor of a big agriculture state, he has spent his whole life understanding and solving the challenges our farmers face, and he is going to deliver big results for all Americans who earn their living off the land.”

Sonny Perdue came by his knowledge of agriculture the old fashioned way: he was born into a farming family in Bonaire, Georgia.  From childhood, and through his life in business and elected office, Perdue has experienced the industry from every possible perspective.  Uniquely qualified as a former farmer, agribusinessman, veterinarian, state legislator, and governor of Georgia, he became the 31st United States Secretary of Agriculture on April 25, 2017.

Additionally, Perdue recognizes that American agriculture needs a strong advocate to promote its interests to international markets.  The United States is blessed to be able to produce more than its citizens can consume, which implies that we should sell the bounty around the world.  The relationship between the USDA and its trade representatives, as well as with the U.S. Trade Representative and Department of Commerce, will be vital.  The work of promoting American agricultural products to other countries will begin with those relationships and will benefit us domestically, just as it will fulfill the moral imperative of helping to feed the world.  Perdue has pledged to be an unapologetic advocate for American agriculture.

Under Secretary Perdue, the USDA will always be facts-based and data-driven, with a decision-making mindset that is customer-focused.  He will seek solutions to problems and not lament that the department might be faced with difficult challenges.

As a youngster growing up on a dairy and diversified row crop farm in rural Georgia, Perdue never fully realized that the blessings of purposeful, meaningful work would serve him as well as they have in life. When he was a young boy feeding the calves and plowing the fields, he was an integral part of the workforce on his father’s farm.  As the son of a mother who was an English teacher for 42 years, he benefitted from her teachings as well – not just by instilling in him the beliefs he still holds dear, but also by lending him an appreciation and respect for language and proper grammar.  But more than anything in his life, it was the family farm which shaped Sonny Perdue.  He has lived and breathed the exhilaration of a great crop and the despair and devastation of a drought.  He learned by experience what his father told him as a child, “If you take care of the land, the land will take care of you.”

The work ethic cemented in him by his farming roots has remained with Sonny Perdue throughout his life.  As a younger man, he served his country in the U.S. Air Force, rising to the rank of Captain.  After earning a Doctor of Veterinary Medicine from the University of Georgia, he put that training to use in private practice in North Carolina.  As a member of the Georgia State Senate for eleven years, he eventually ascended to the position of President Pro Tempore as elected by his senate colleagues.  As a two-term governor of Georgia, he was credited with transforming a budget deficit into a surplus, dramatically increasing the student performance in public schools, and fostering an economic environment that allowed employers to flourish and manufacturers and agricultural producers to achieve record levels of exports.  He followed these accomplishments with a successful career in agribusiness, where he focused on commodities and transportation in enterprises that have spanned the southeastern United States. These experiences have proven invaluable in his current role as principal advocate for American agriculture and all that it serves.

Perdue is a strong believer in good government, in that it should operate efficiently and serve the needs of its customers: the people of the United States.  As a state senator, he was recognized as a leading authority on issues including energy and utilities, agriculture, transportation, emerging technologies and economic development, and for his ability to grasp the nuances of complex problems.  As governor, he reformed state budget priorities, helped Georgians create more than 200,000 new jobs, and promoted his home state around the world to attract new businesses.  In 2009, the Reason Foundation’s Innovators in Action magazine recognized Perdue as a leader who “aggressively pursued new strategies to increase the effectiveness and efficiency of government and deliver better value at less cost to taxpayers.”  In addition, he was named “Public Official of the Year” in October 2010 by Governing Magazine.  To this day, his thoughts are never very far from the wishes of the citizens – the true owners of the government.

Perdue’s views on agriculture have always been shaped by his first-hand knowledge of all of its aspects, both as a farmer and as an agribusinessman.  He appreciates the daily concerns and needs of American farmers, while also understanding the intricacies of global commodities markets.  He is acknowledged as a national leader in agriculture, having served as a board member for the National Grain & Feed Association, and as President of both the Georgia Feed and Grain Association and the Southeastern Feed and Grain Association. Perdue has long-standing, close relationships with the leadership of the National Farm Bureau and has been recognized by the Georgia 4-H and FFA programs, among others, for his leadership in agriculture.

As the product of Georgia, a state where agriculture is the leading economic driver, Perdue recognizes that agriculture is an issue and industry which cuts across political party boundaries.  He recognizes that the size, scope, and diversity of America’s agricultural sector requires reaching across the aisle so that partisanship doesn’t get in the way of good solutions for American farmers, ranchers, and consumers.

Perdue has been married to Mary Ruff Perdue for 44 years and has four adult children and fourteen grandchildren.  He and his wife have served as foster parents for eight children awaiting adoption.  Perdue remains a licensed airplane and helicopter pilot and avid outdoor sportsman.