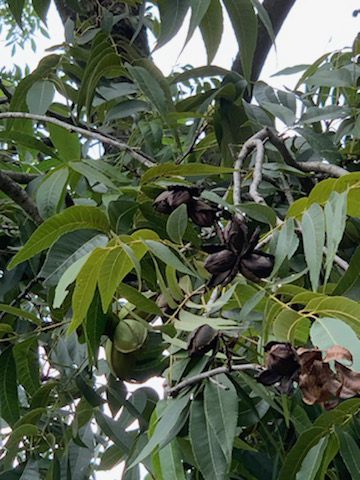 According to the UGA Extension Pecan Blog, shuck decline in pecans is starting to manifest itself in orchards across the state.

Growers are starting to see symptoms of shuck decline in the orchard. Symptoms range from shucks turning all the way black to the tips, green shucks turning black and peeling back at the suture. In some cases, kernels are black and in other cases, there is no kernel. The degree of declining shucks varies from tree to tree.

For growers to minimize the problem moving forward, they need to continue to irrigate. This will be critical if the weather turns dry later this month and in October.

According to the UGA Extension Pecan Blog, the severity of shuck decline depends on when the decline started during development. If the shuck has already split open, likely, growers can still shake the nut from the tree and it will be fine. However, much of this dark color on the shucks beginning before they open may hurt yield and quality.

Shuck decline is mainly a stress-related issue. It can be worse on trees with a heavy crop load.