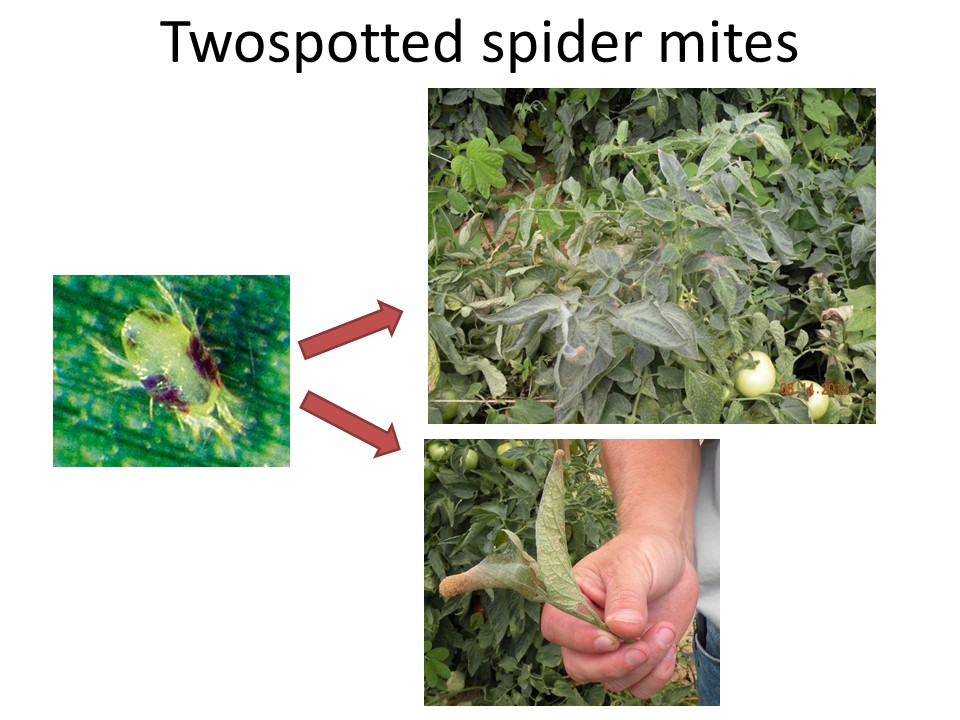 AUBURN UNIVERSITY, Ala. – Summertime can be a productive season for growing vegetables. However, it is also a time that can be hot and dry. These are the perfect conditions for spider mites, pests that can cause widespread damage quickly. When present in high numbers, they can be pests for many aspects of farming. There are many species of spider mites that are common pests in the southeast. These include two-spotted spider mites, russet mites and rust mites.

Ayanava Majumdar, an entomologist with the Alabama Cooperative Extension System, said high tunnels and greenhouses are ideal for spider mites.

“High tunnel and greenhouse environments are perfect conditions since spider mites like it hot and dry,” Majumdar said. “Pockets of heat in certain areas of a greenhouse and the dry leaves of crops are highly suitable for spider mites. In the high tunnels, dust settling on the crops near the sidewalls could contain enough mites to start an invasion which later moves toward the center of the structure.”

Two-spotted spider mites (TSM) have a variety of colors ranging from green to yellow. They also all have a pair of black spots on top and four pairs of legs in the adult stage. Russet mites are smaller and teardrop-shaped; these do not make webs. TSM is well known for rapid life cycle and multiple generations resulting in outbreaks within weeks of detection. Webbing over flowers, leaves, and fruits are late symptoms of TSM attack.

Growers should detect spider mite infestations early and manage immediately to prevent outbreaks. Spider mites are about 0.4 mm or smaller – they may look like dust particles to a naked eye. Due to their small size, good scouting practices include a magnifying lens, camera (people can even use smartphone cameras for magnification and recording), and glass vials with denatured alcohol for sampling. Under a magnifying lens, TSM may be seen moving on the underside of leaves with hundreds of eggs attached to silken webbing. Tapping leaves on a piece of white paper and then counting the moving mites is another rapid scouting practice.

Cultural and mechanical practices: Proper plant care that maximizes plant growth is important. Timely irrigation and nutrient management are effective preventive tactics. Weed control around cropping areas will reduce intermigration of spider mites and prevent early infestations. Since they are good hitchhikers, reducing foot traffic or machine passes through infested areas of the field can help contain limit outbreaks. Reducing mechanical operations such as mowing in hot dry weather can also reduce the spread of spider mites. In case of an imminent outbreak situation, harvest the crop timely and clean up all plant residue. In large high tunnels, shut down crop production in phases when spider mite threat is high. Natural rainfall helps reduce spider mites in open field crops.

Biological control agents: Spider mites have several natural enemies (predatory mites). Many vendors sell predatory mites in a variety of packaging. The trick to success is to release them soon after pest detection in order to suppress the harmful populations. Predatory mites are excellent choices for high tunnel and greenhouse environments where spot-treatment may be adequate instead of area-wide release.

Chemical and organic insecticide choices:  Several chemical insecticides have effectiveness against spider mites, broad mites, and rust mites. Growers should download and use the 2019 Southeastern U.S. Vegetable Crop Production Handbook. Do not use synthetic pyrethroids as they may kill off predatory mites resulting in bad spider mite outbreak. Among organic choices, most products are broad-spectrum insecticides with miticidal action in the form of contact action.