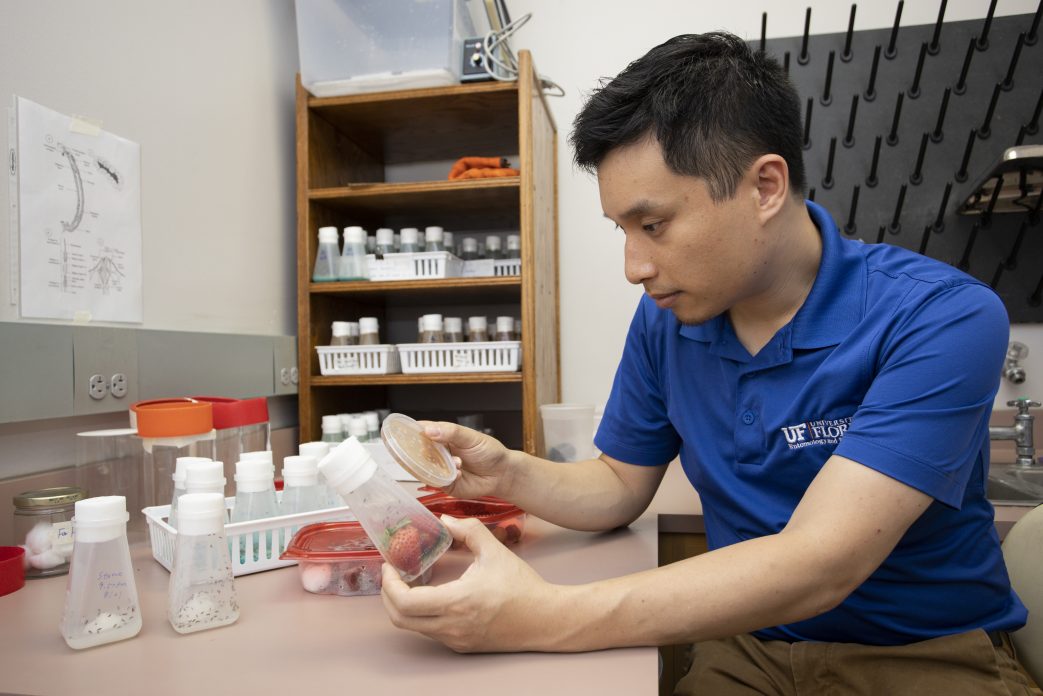 (UF/IFAS) — In the home, they seem to appear out of nowhere. A piece of fruit is placed on the kitchen counter, and suddenly there’s a fruit fly. But the bug commonly referred to as a fruit fly, Drosophila melanogaster, may more accurately be called a vinegar fly, with an appetite for rotting fruits.

Instead, it’s a cousin, Drosophila suzukii, also known as the spotted wing drosophila, that prefers fresh fruits. And that preference presents a known hazard to fruit producers in Florida and elsewhere, prompting a team of University of Florida Institute of Food and Agricultural Sciences (UF/IFAS) researchers to search for novel ways to prevent a future outbreak.

“Once these insects are in a field, they multiply in a matter of a few days,” said Adam Wong, an assistant professor in the UF/IFAS department of entomology and nematology who is leading a study involving the fly. “In as few as seven days, they develop from eggs to adults, and the females can lay up to 600 eggs in their lifetime. Plus, they do particularly well in subtropical climates.”

Wong’s research of the species is part of a 2019 U.S-Israel Binational Agricultural Research & Development Fund research grant he was awarded, totaling $310,000. The organization’s grants fund collaborations between scientists in the United States and Israel to address the world’s top-priority agricultural problems. Wong’s UF/IFAS collaborators include Daniel Hahn and Oscar Liburd, both entomology professors at the UF campus in Gainesville, and Xavier Martini, an assistant entomology professor based at the UF/IFAS North Florida Research and Education Center in Quincy. The three-year project began in October.

Wong’s team is studying the spotted wing drosophila, while his counterparts at Hebrew University in Israel, Edouard Jurkevitch and Boaz Yuval of the faculty of agriculture, are looking at Ceratitis capitata, commonly known as the Mediterranean fruit fly, another invasive fruit fly of the family Tephritidae.

“Both are global pests responsible for billions of dollars in crop losses each year,” Wong said. “The motivation behind the project was to help develop a sustainable strategy to manage fruit fly pests. Growers are relying on spraying insecticides, but it’s not a sustainable way to control the pest. We want to develop something that can help them in the long term.”

Wong said the species they are studying are among many other fruit fly pests and are known to spread invasively. The goal is to identify how the insects’ gut bacteria, or microbiome, helps the pest invade and spread. What they hope to discover has the potential to inform other future pest management strategies.

“Our first objective is to understand how these insects’ microbiome helps the larvae develop in fruits,” Wong said. The method, he explains, involves a state-of-the-art process to sequence the flies’ RNA. “If we can identify some genes or microbial species in the fly that are vital for development, then we can try targeting them to combat or prevent infestations.”

Another objective would identify microbes that can attract or repel the pest, and to use that information to develop an attractant to lure flies to a trap, or a repellent that would keep the flies from entering a field.

“One of the most important preventive pest control measures uses traps to monitor if there’s a new fly,” Wong said. “Even if it’s just a single individual, they can notify the state and take action quickly. We currently don’t have a robust monitoring system for this pest because a lot of the attractants currently in use are generic, like wine or yeast, which tend to attract non-pest insects, as well.”

One method that Wong’s team has already been testing is manipulating the flies’ microbiome, such as making them “germ-free,” an intervention process that occurs before they hatch. Each egg’s surface is naturally coated with microbes that pass from mothers to the offspring as the larvae hatch and consume their shells. By cleansing the shells of this microbiome and then placing them in a sterile environment, the Wong lab is able to identify the roles microbes play in fruit fly physiology.

“Accumulating evidence from our lab and others has shown that the larvae failed to develop in fruits without the microbiome,” Wong said. “Finding ways to disrupt the microbial community could be a novel strategy for managing this pest. We may not be able to kill off every fly, but even suppressing their population so that they can gradually become less competitive or less established in an environment would still be very useful.”

The need for long-term pest management solutions is increasingly important with the rising global trade, Wong added. He pointed to a 2015 invasion in Florida of a global pest known as the oriental fruit fly, also of the Tephritidae family, that caused an estimated $30 million in losses.

“Just because a species does not currently exist in an area, does not mean it doesn’t have the potential to enter,” Wong said. “Once a pest makes it through undetected, it can cause huge problems.”