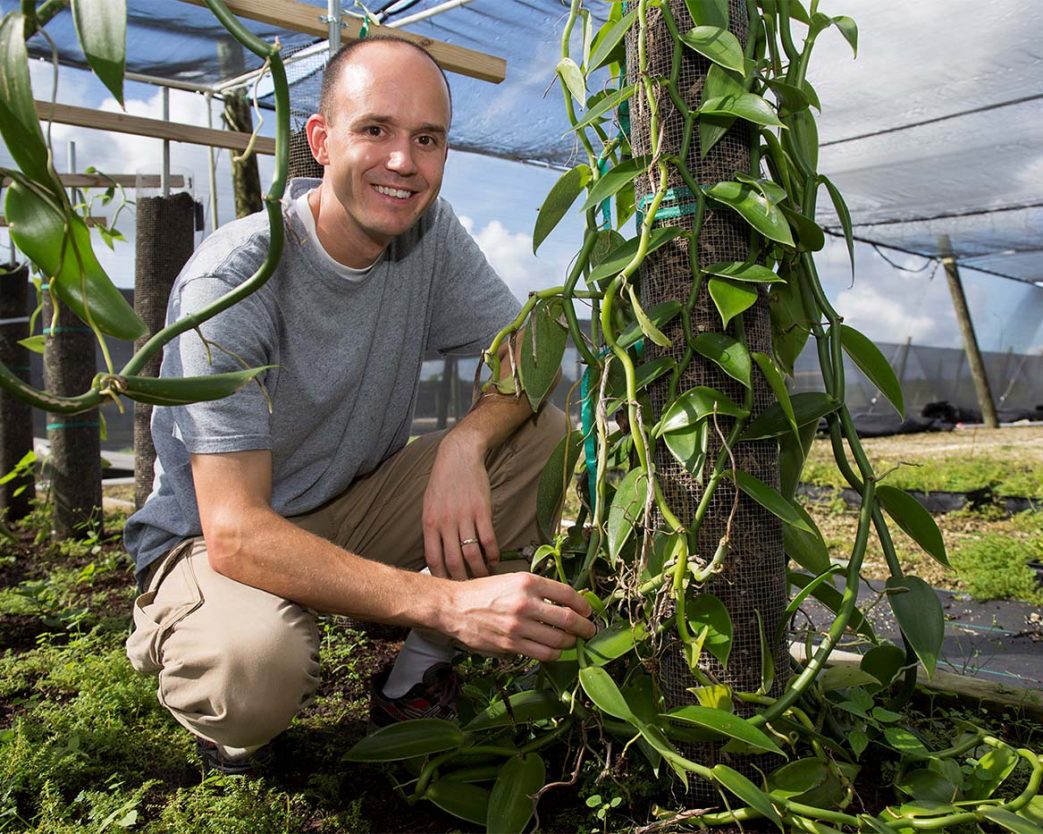 (UF/IFAS) — A tablespoon of vanilla goes a long way. As a key spice in baking, the intoxicating aromatic bean that reminds folks of delicious holiday desserts has a variety of uses throughout the year.

As a bean, it is used to flavor foods and products from cakes to candles. As an extract, it is a basic ingredient in flavoring food, hot and cold beverages, even pharmaceutical medications. The extract provides benefits in cosmetics for its antioxidant properties, and in perfume and traditional craft markets for its scent.

New developments in genetic research, conducted by University of Florida scientists in Homestead, will give South Florida growers an opportunity to experiment with a large variety of vanilla bean species as early as February 2020. If all goes as planned, growers could find themselves starting a niche market that has been dominated by the Republic of Madagascar at a steep price.

“We have generated a vanilla genome and diversity study looking at over 100 vanilla types.  We currently have a collection of over 200 vanilla types from this preliminary research,” said Alan Chambers, an assistant professor of horticultural sciences at the University of Florida Institute of Food and Agricultural Sciences (UF/IFAS) Tropical Research and Education Center.

Vanilla seed capsules are commonly referred to as beans. The major commercial species is V. planifolia, with V. x tahitensis cultivated to a lesser extent. These are cultivated at a hefty price from the island country.

Having one of the largest recorded collections in the world at the UF/IFAS Tropical Research and Education Center has its benefits. During this phase of the research, it gives Chambers’ team including other faculty at the center and growers a variety of beans from within the collection to choose from. Each species has been studied for its individual genetic composition, said Chambers.

“We are working on characterizing each of the vanilla species and that takes time, but it goes hand in hand with providing growers with the ability to choose what is right for them and their preferences in the taste and aroma,” said Chambers. “We hope to go from the ‘one vanilla fits all’ model to offering specialty, niche, and, ultimately, exciting options for discerning growers and foodies.”

Having this volume in a collection offers a large selection of vanilla tastes and aromatic variations at various points of the scale from subtle to potent. In turn, it opens doors to new uses giving way to a new agricultural crop that could fuel the Sunshine State’s economic engine, said Chambers.

“For those interested in baking, we are working with natural vanilla extracts from five different types of vanilla,” added Chambers.

These include the commercial types of V. planifolia, which is the typical extract purchased at a store. Then there is V. x tahitensis which is similar to V. planifolia but with anise flavor notes. Chambers explained the later has an essence that reminds him of eggnog or pizzelle type cookies. The V. pompona is a related species grown commercially on a limited scale in South America. Researchers are also looking at hybrids with native species, some of which have marshmallow flavor notes.

The vanilla growing at the center produced its first flowers and beans this year. Chambers anticipates more flowering and beans during the first and second quarter of 2020 allowing for the opportunity to work with growers who are interested in starting a vanillery.

In Chambers’ most recent publication with his team, Pamela Moon, Vovener de Verlands Edmond and Elias Bassil, Vanilla Cultivation in Southern Florida is designed as a guide to local growers who wish to indulge in starting a vanillery as a secondary crop on their farms.

Currently, the United States is the largest importer of vanilla beans from Madagascar that are further processed into vanilla extract. As a bean, it is the second most expensive and is the world’s most popular flavor.

In Madagascar, where over 80 percent of vanilla is produced, the flowers require pollination by hand. The pods need several months to cure after harvesting that results in a process that is time-consuming and labor-intensive. Then there is vanilla bean theft and extreme weather conditions in Madagascar that also drive the price up for other countries who rely on the supply chain. Vanilla is native to Mexico, but deforestation there has greatly reduced its natural habitat. For these and other factors, vanilla is an expensive commodity – possibly until now.

“Southern Florida’s hot, humid climate is suitable for vanilla cultivation,” said Chambers. “We look forward to the next phase of the research and working with growers at the start of 2020.