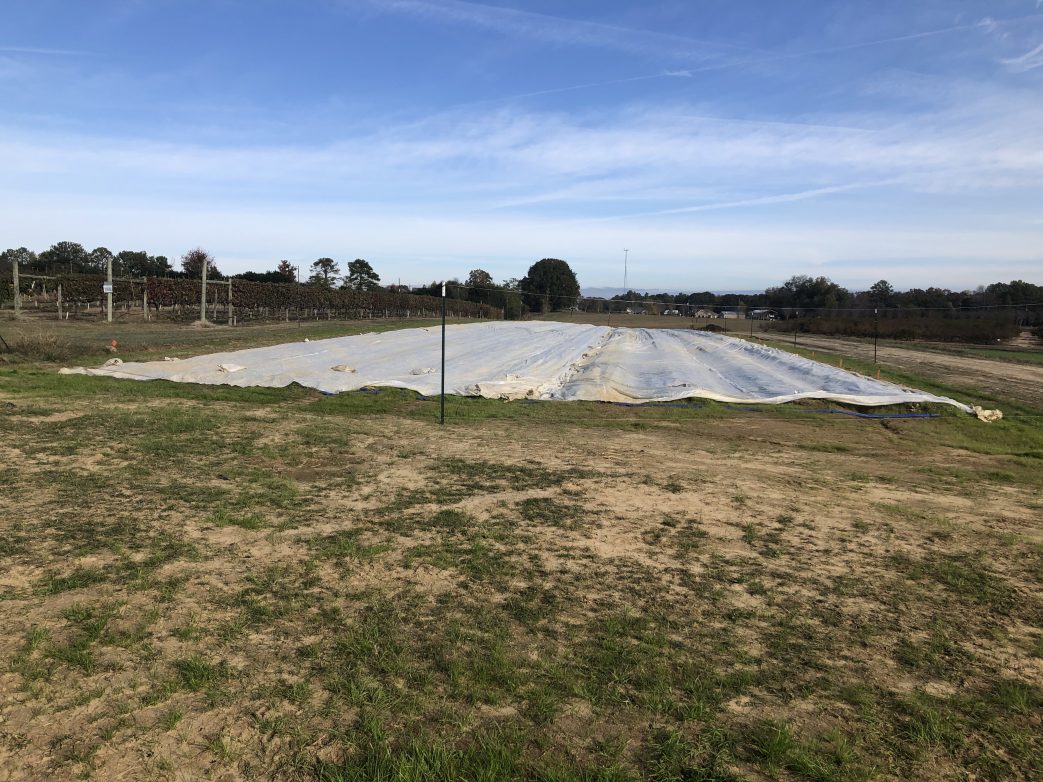 Row Covers in strawberry fields can protect the crop from cold temperatures, fierce winds, devastating frost and persistent wildlife. But it can also potentially increase yields, according Edgar Vinson, assistant research professor and Extension specialist in the Department of Horticulture at Auburn University.

In research conducted this past year at the Wiregrass Research and Extension Center in Headland, Alabama, Vinson tested the effects of row cover applications on late plantings of three strawberry varieties: Albion, Camarosa and Sweet Charlie. Treatments were set for fall applied (Nov. 20-Dec. 20), fall and winter applied (Nov. 20-Dec. 20 and Feb. 11-March. 11) and control (applied for frost protection only).

There was nearly 10,000 pounds per acre for Camarosa in the control treatment, but approximately 11,000 in the fall and winter treatment.

“Each time it appeared that the more times that the row cover was applied, the more yield we actually had with the exception of Sweet Charlie,” Vinson said. “Sweet Charlie increased with the fall cover but seemed to fall off with the fall/winter application. I think that’s probably because Sweet Charlie is an early variety. It begins to really sputter around three weeks. It’s a really a great tasting berry, early berry. A lot of people have it in their operations because it’s so early and get on the market early. But you really can’t expect much out of that after three weeks.”

The first weeks of harvest is where growers could potentially see the most benefit. In week one, there was less than 100 pounds per acre for the control treatment of Camarosa but more than 350 in the fall/winter treatment. In the Sweet Charlie variety, there were more than 100 pounds per acre in the control treatment but approximately 225 pounds in the fall/winter treatment.

The yields continued to increase in weeks two and three of harvest for Camarosa and Albion but Sweet Charlie dropped off during the third week.

Row covers can effectively improve the growth of strawberries and improve yield.

The effectiveness in row covers on the different varieties depends on the location.

Strawberries receiving row covers in the fall and again in the winter had increased yields over the fall only and non-treated control treatments.

Profits increased when row cover was applied during the fall and in the fall-winter periods.

While strawberries are a winter crop, they are vulnerable to freezing temperatures, which is the main row covers are applied. Vinson said if temperatures drop to 20 degrees F, this could result in plant injury. However, if the plant is flowering or producing fruit, it can only withstand temperatures as low as 28 degrees F.

“Buds are dormant and as long as that tissue is not quite as susceptible as a plant that’s developing and about to bloom,” Vinson said. “The more the flowers progress, the more they are susceptible to cold damage.”

Alabama’s strawberry production is growing in popularity throughout the state. Vinson said in 2012, there were 74 farming operations on 150 acres. While acreage has not increased, the number of operations has increased to 126.

Use of Row Covers on Strawberries

Row covers should be applied ahead of a predicted frost and should be removed after threat of damage has passed, though this does require a lot of workers/bags of weight to keep row covers down. They need to be replaced when the frost threat returns.