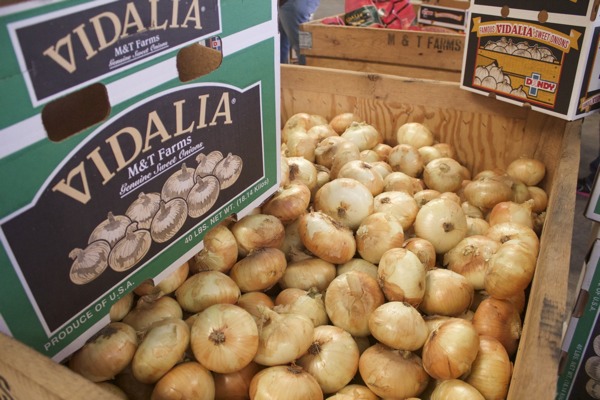 Annually, Georgia plants over 12,000 acres of sweet Vidalia onions (National Agricultural Statistical Service, U.S. Department of Agriculture) with farmgate value of approximately $145 million dollars. Vidalia onion ranks first in terms of farmgate value among vegetables in Georgia, making it the most important vegetable crop in the state. Among the spring-grown onions in the United States, Georgia ranks first because Vidalia onions are predominantly grown in spring.

The production and quality of Vidalia onions have been threatened by a number of bacterial diseases. Center rot of onion is the important one. This disease (Allium cepa L.) is caused by a bacterium, Pantoea ananatis. The pathogen was first associated with center rot in Georgia in 1997. Since then, it has been spreading to different onion-growing regions in the United States.

DISEASE SYMPTOMS
The symptoms of center rot start with water-soaked lesions on foliage that run along the length of the leaf. The lesions may gradually turn necrotic and produce a blighted appearance with disease progression. In severe cases, infected plants may wilt and foliage appears bleached.

P. ananatis can also invade the bulb tissue and cause bulb discoloration. The bacterial invasion can predispose bulbs to postharvest rot caused by the secondary microbes in storage. Under favorable conditions, yield losses to this disease may be as high as 100 percent.

SURVIVAL AND SPREAD
The pathogen has multiple sources of inoculum where it survives or oversummers/overwinters between onion crops. Contaminated onion seeds can introduce the pathogen to onion fields. The pathogen is both seed-borne and seed-transmitted in onions. Under favorable conditions, P. ananatis can cause considerable economic losses.

P. ananatis can also be transmitted to onion by two known insect vectors, Frankliniella fusca (tobacco thrips) and Thrips tabaci (onion thrips). The mode of bacterial transmission was reported to be passive through contaminated thrips feces; however, it is still unclear if this phenomenon occurs in natural conditions.

P. ananatis survives as an epiphyte on weeds in the farmscapes of Georgia. The pathogenic strains of P. ananatis have been found to survive on over 20 weed species near onion-production sites in Georgia. Weeds may provide local sources of inoculum during the season and harbor the pathogen from one growing season to the next.

RESEARCH RESULTS
Currently, genetic resistance to this pathogen in commercially available cultivars has not been identified. The genetic diversity of the pathogen must be elucidated to successfully breed for genetic resistance. Therefore, one of my graduate students (Spencer Stumpf) 1) investigated  the genetic diversity of P. ananatis strains endemic to Georgia, 2) tested commercially available cultivars for reduced center rot incidence at various growth stages, and 3) examined the efficacy of protective chemical foliar treatments at two growth stages and the role thrips presence had on effectiveness of applications.

We assessed 50 P. ananatis strains collected from Georgia over three decades to determine genetic factors that correlated with onion pathogenic potential. Strains varied greatly in their pathogenic potential and aggressiveness on different cultivated Allium species like onion, leek, shallot and chive. Using multi-locus sequence analysis and repetitive extragenic palindrome techniques, we did not observe much genetic diversity among strains.

However, another graduate student (Shaun Stice) whom I co-advise with Brian Kvitko (University of Georgia phytobacteriologist) was able to show diversity among strains comparing whole genome sequences of this pathogen. We are currently working on understanding how diverse our P. ananatis population in Georgia is and what bacterial populations should be used while screening for genetic resistance.

In addition, we also evaluated if thrips infestation can result in reduced efficacy of protective treatments against P. ananatis. We conducted greenhouse studies where onion plants were treated/protected with Kocide, Actigard or both at the abovementioned onion-growth stages. Thrips were included as one of the variables in the experiment. Interestingly, we observed that there was a significant effect of chemical applications at two onion-growth stages on the bulb incidence of center rot, in absence of thrips. At bulb initiation, treatments of Kocide 3000 and Kocide 3000 + Actigard application resulted in significantly lower center rot incidence in onion bulbs than Actigard alone. Similar results were observed for the protective treatments at the bulb-swelling stage.

In contrast, applications of Kocide 3000, Actigard or Kocide 3000 + Actigard at two growth stages did not significantly reduce center rot bulb incidence for the set of treatments that were exposed to thrips. The results indicate that thrips infestation can reduce the efficacy of protective chemical treatments against P. ananatis. Hence, it is critical to implement an effective management strategy, including thrips management and protective chemical treatments, against P. ananatis at susceptible growth stages of onion.

Overall, the results from our research findings shed important insights into the diversity, epidemiology and management of center rot of onion, which can be incorporated into integrated disease management. Our research group is working in collaboration with scientists, Extension specialists and county Extension agents to further extend our understanding on this important issue. Hopefully, in the future, we will be able to find genetic resistance that can be incorporated into our elite Vidalia onion varieties.

Bhabesh Dutta is an assistant professor and Extension vegetable disease specialist at the University of Georgia College of Agricultural & Environmental Sciences in Tifton.