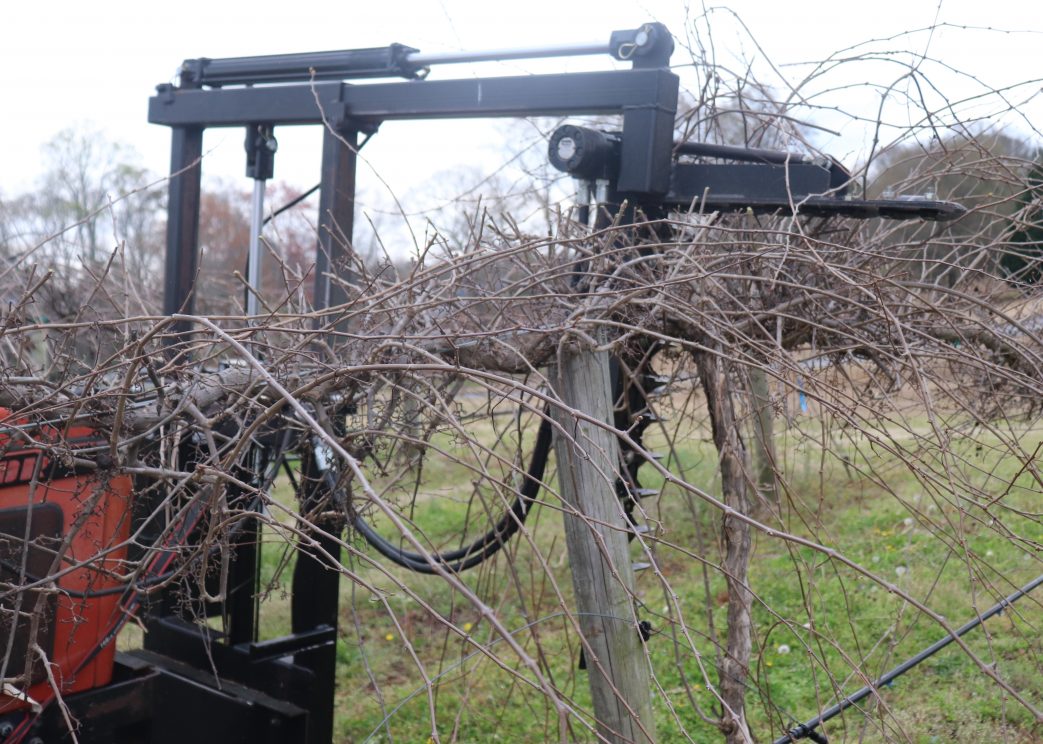 Pruning muscadine vines is a chore that growers are tackling now during the dormant period. With mechanical pruning and hand pruning both options, growers must make economically based decisions on how to proceed.

“Sometimes mechanical pruning is the only option when hand pruning cannot be completed on larger acreages,” said Cain Hickey, University of Georgia Cooperative Extension viticulturist. “Hand pruning can be the largest labor investment in the commercial production of Carlos, a muscadine cultivar that is often mechanically harvested and is used for processed, value-added products. If input costs can be reduced, then crop and/or value-added product sales will result in greater profitability.”

However, mechanical pruning isn’t suitable for all muscadine producers nor in all scenarios. A tractor-mounted mechanical pruner is a huge investment. So, hand pruning is a viable option for operations with smaller acreage and a regular workforce.

Choosing a pruning method may also depend on the type of cultivar and what it will be used for. Growers aren’t as concerned with the appearance of Carlos, for example, since it is a cultivar that is processed and used for wine and other value-added products. Mechanical pruning can therefore be a viable option for Carlos and Noble, two “juice” cultivars.

However, aesthetics and berry size are a concern for those cultivars that are being sold in the fresh market. Many producers of fresh market muscadine cultivars, such as Supreme or Paulk, will hand-prune their vineyard to limit canopy congestion, reduce rot and cosmetic defects and optimize harvest efficiency.

Pruning is an annual practice that results in the retention of fruitful buds in muscadines and other perennial fruit trees. Retaining fruitful buds determines shoot density, cluster number and crop yield in the following season. Ineffective pruning can compromise the quality and quantity of the crop. Failing to prune can also lead to wood-borne disease and decreased fruit production over time.

“Dormant pruning is an important vineyard management decision as it sets the crop level and canopy density before green tissues are present. Growers must take several considerations into account when choosing a pruning method,” Hickey said. “These include vineyard design and scale, cultivar type (processing or fresh market) and labor availability throughout the year.”

Dormant pruning is usually done between December and March or April, depending on the dormant period at the specific locale of a given muscadine vineyard.

Muscadines and their products are predominantly sold in the southeastern United States, but some producers distribute to northern U.S. markets. Georgia and North Carolina have historically been the largest muscadine producers. Muscadines are also grown in Alabama, Arkansas, Florida, Tennessee, South Carolina and Texas, amongst other states.