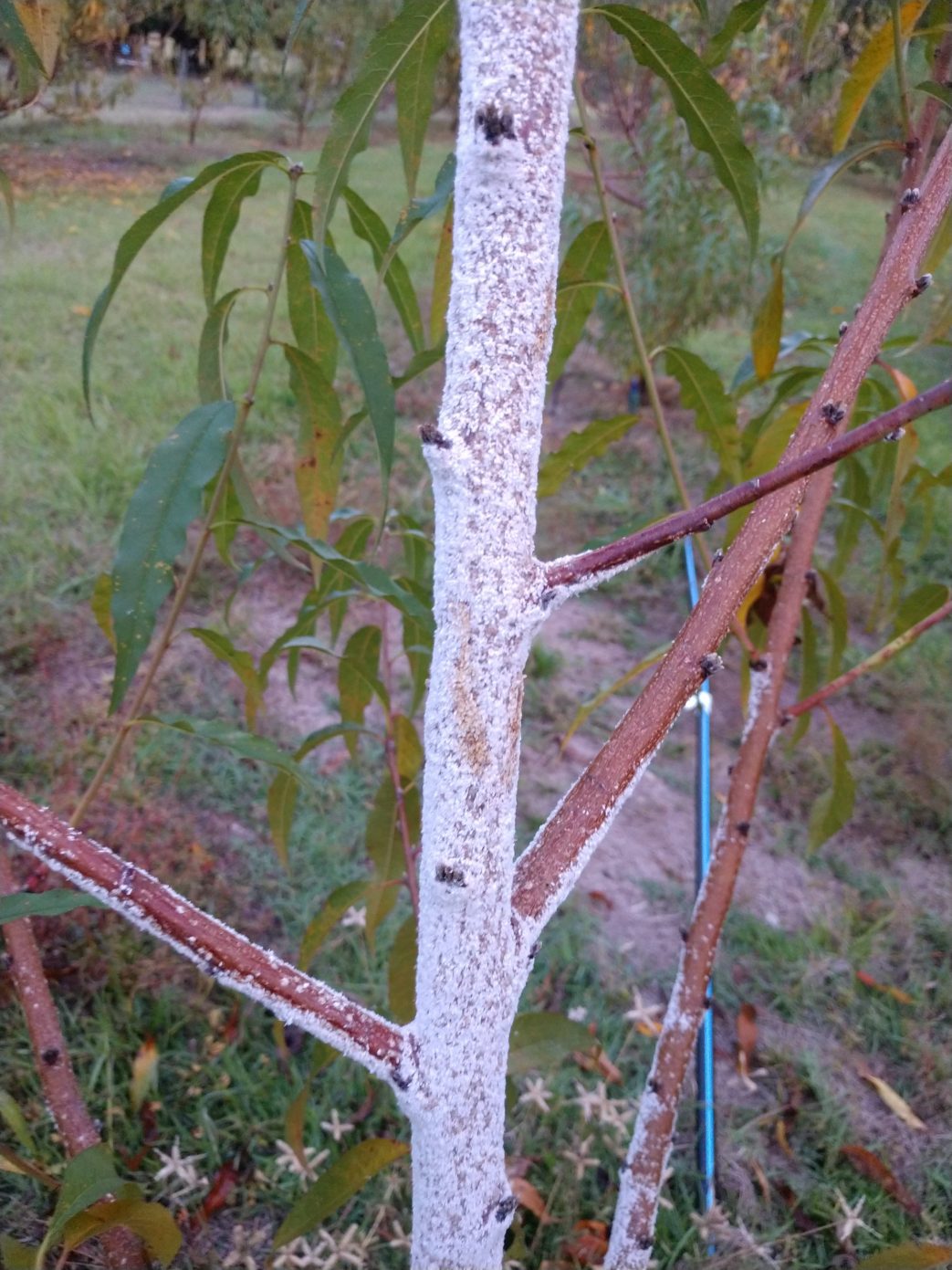 This time of the year, during winter pruning and tree topping/hedging, you will probably see tiny white insects on peach tree limbs and branches. In most cases, these insects are scales, which cause branches to die back. If not treated, tree death can eventually occur.

Scales, normally white peach and/or San Jose scale, are serious pests, which are present at some level in every orchard. Scales overwinter on trees. Two dormant horticultural oil application(s) should be applied to every acre, every year. Dormant horticultural (superior) oils are more insecticidal and more phytotoxic than verdant (summer) horticultural oils. While the verdant oils are less phytotoxic, unfortunately, they typically provide less scale control.

Apply oil sprays dilute, 150 to 200 gallons per acre. Make your first oil spray in early winter to reduce your tree’s dormant-season scale burden. Reduced-rate oil sprays of 1 to 1.5 percent (5 to 7.5 gallons of oil in 500 gallons of water) are suggested early in the dormant season. Begin spraying just after 95 percent of the leaves have fallen, and again in spring as buds swell and begin to break. In the spring, reduced-rate oil sprays can be made until the early pink bud stage. Phytotoxicity is seldom seen with oil applications made when daily low and high temperatures are in the 28 to 65 degree range, and the two- to three-day forecast does not include a harsh cold snap.

Insect growth regulators like Knack and Esteem are effective but expensive. To achieve good coverage, slow tractor speeds are essential.

Curative application of entomopathogenic nematodes has shown promise on established LPTB and PTB infestations when used with an appropriate anti-desiccant to keep the borer wounds moist long enough for the nematodes to find larvae. Middle Georgia growers interested in on-farm trials should contact their county agent and fruit entomologist.

LPTB moths do not glue their eggs in place. Smooth healthy bark and well-healed pruning cuts at the origin of limbs are less prone to LPTB larval infestations. The most effective LPTB control programs rely on a combination of preventative chlorpyrifos (Lorsban) sprays applied pre-bloom followed by aggressive full-season cover spray programs. Use of high-rate pyrethroid applications during April through May in central Georgia and South Carolina’s ridge is an important component of LPTB management. Sprays for LPTB do not provide peach tree borer control.

Get more information in this guide.

Ali Sarkhosh is an assistant professor and Extension fruit crops specialist with the University of Florida Institute of Food and Agricultural Sciences in Gainesville.