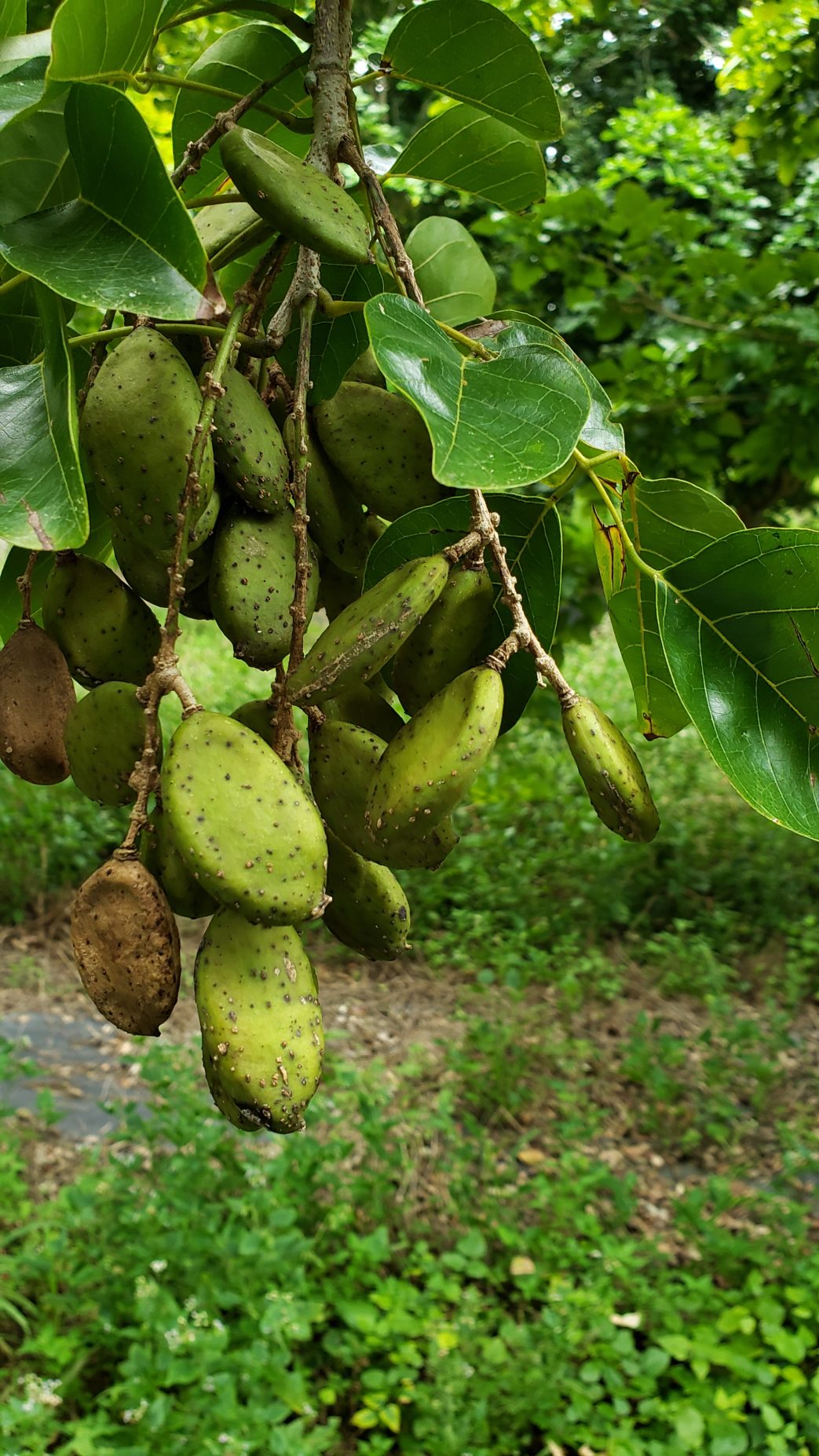 To overcome economic losses from citrus greening disease, Florida citrus growers are looking for alternative crops that could be planted in their current fallow lands. Besides maintaining the ag community’s wellbeing, alternative crops should require low water and nutrient inputs in order to promote environmental sustainability.

One such alternative is Pongamia pinnata, also known as pongam, a fast-growing evergreen tree. It can reach a height of 40 feet and has a broad, spreading canopy that provides moderate shade. The dark green, glossy leaves are briefly deciduous and fall off for a short time in early spring. Pealike, fragrant clusters of white, pink or lavender flowers hang in clusters up to 10 inches long in the spring.

The tree is a member of the Fabaceae family and produces seed pods that are oval to flat with a curved and pointed tip. The tree is accustomed to living in areas with high levels of heat and sunlight, and its long taproot and dense root network help it survive in arid environments.

Pongamia is a new alternative crop to citrus that is adapted to the climate and conditions of Florida’s Indian River region. This crop can be planted in former citrus groves without the need for additional infrastructure or pest control measures. Pongamia is generally recognized as a lower maintenance crop than citrus.

DISTRIBUTION AND HABITAT
Pongamia is widespread throughout Asia, Africa, the Pacific and North America. Southeast Asia, Australia and the western Pacific Islands are among the humid and subtropical environments where it is native. Due to a long history of cultivation and transport, the origin of pongamia is uncertain, but the species is generally considered native to the Indian subcontinent.

The pongamia tree is grown throughout India except for the temperate regions. Pongamia has been naturalized in China, Malaysia, Indonesia, Japan, Vietnam and the United States.

Pongamia can grow in a variety of soil types, including stony, sandy, clayey, saline, alkaline and waterlogged. However, it performs best in moist, deep, well-drained sandy loams. It does not grow very well in very dry sand.

Pongamia is known as a maritime species due to its natural occurrence along the coasts and riverbanks of India, Bangladesh and Myanmar. In Australia, it usually grows in coastal areas and waterways.

CROP CULTIVATION
In some regions of the world, pongamia blooms year-round, but in Florida it blooms in late spring. From September to October, seed production takes place. The seeds germinate and grow rapidly, reaching maturity in four to seven years.

In tree improvement programs, vegetative propagation is utilized to produce plants with the same genotype as the mother plant. Various vegetative propagation techniques, including cuttings, grafting, air layering and tissue culture, can be utilized. Using synthetic or natural auxins to induce adventitious rooting is a common method of stem cutting.

Grafting is a common approach for overcoming the issue of long juvenile periods and producing trees with the same level of productivity as the mother plants. In this method, scions from the elite genotype are collected. Commonly, cleft grafting is utilized to graft pongamia. In cleft grafting, a small cut is made in the stock, and then the pointed end of the scion is inserted.

MULTIPLE USES
Significant interest exists in developing pongamia as a new crop. It can be used as a source of energy such as biofuel, as livestock feed due to its high protein content, as compost, as an ornamental plant or for other purposes.

The expansion of staple crops like oil palm and soy comes at the expense of forests and peatlands that are biodiversity hotspots and rich carbon stores. The destruction of these habitats decreases global biodiversity and releases billions of tons of carbon into the atmosphere. Pongamia can supplant the expansion of oil palm and soybean acreage and avoid deforestation. Moreover, pongamia trees store carbon and produce nitrogen for healthy soils. A pongamia tree orchard can absorb 115 metric tons of carbon per acre over 30 years, making it one of the most sustainable commercial sources of edible oil and plant protein.

Some cultivars produce seeds that contain up to 40% oil. The oil of the seed is reddish-brown, bitter and viscous. It is possible to improve the texture and mouthfeel of buttery spreads by using pongamia oil.

RESEARCH PROJECT
A pongamia field trial was established at the Indian River Research and Education Center (IRREC). This trial will be the base for the development of pongamia research and Extension cooperative programs that include water management, root biology, plant pathology, crop nutrition, postharvest, and grower feedback and engagement.

Objectives of the project include:

The results from this project will increase understanding of pongamia behavior to soil, water and climatic stresses. Based on the biophysical studies from the trial at IRREC, guidelines (i.e., fact sheets and field days) will be provided that inform the public on management aspects of pongamia.

Amir Rezazadeh is a multi-county fruit and field crops Extension agent at the University of Florida Institute of Food and Agricultural Sciences St. Lucie County Extension office in Fort Pierce.