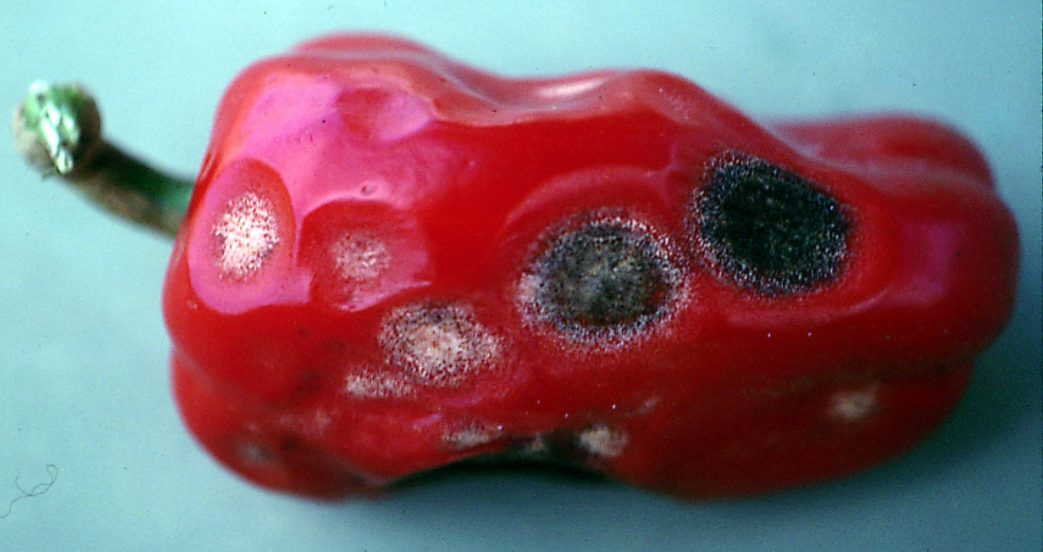 Anthracnose is a serious disease problem that can occur throughout pepper-growing regions worldwide. Extensive outbreaks of the disease have developed on bell and other specialty peppers types, such as hot peppers.

The disease is more common when both the inoculum and warm weather combined with frequent rains occur. Fruit infections cause significant losses of either mature (red, yellow or orange) or immature (green) fruit due to non-marketability.

The causal agents of anthracnose are fungi within the genus Colletotrichum. Species of Colletotrichum cause many common plant diseases on a wide variety of different hosts worldwide. Colletotrichum gloeosporioides and Colletotrichum acutatum are the two species found on pepper in Florida, but they have a host range beyond pepper.

SYMPTOMS AND SPREAD
C. gloeosporioides is mainly associated with infecting ripe fruit, whereas C. acutatum produces lesions on immature fruit. Anthracnose lesions can occur on leaves and stems, but infections on the fruit have the largest economic impact.

Fruit symptoms begin as water-soaked lesions that are soft and slightly sunken. As the lesions age, they appear concentric and become covered with a wet, gelatinous spore mass. Fruit infected with C. acutatum will have lesions that are salmon-colored from their spore mass. C. gloeosporioides lesions will generally be darker in appearance.

Peppers that are grown in fields with a history of anthracnose are at higher risk. Rainy weather, occurring with temperatures around 80°F or higher, enhances disease spread and increases disease severity due to the spread of spores via splashing onto fruit. In addition to rain splashing, spores may be moved mechanically by workers or equipment that come into contact with infected plants.

The pathogen is seedborne. Anthracnose may be introduced into the field on infected transplants or it can survive between growing seasons in plant debris or on alternate weed hosts.

MANAGEMENT MEASURES
An integrated approach to disease management is required to control anthracnose.

Select seed sources that are certified or known to be pathogen-free.

Transplants should be protected from the disease by eliminating weeds and solanaceous volunteers around the transplant facility.

Fields should have good drainage and be free from infected plant debris. If the disease was previously present, crops should be rotated away from solanaceous plants for at least two years. Field sanitation practices include control of weeds and volunteer peppers plants.

Resistance is available in some varieties of specialty peppers, such as chile, but not in bell peppers. For bell pepper production, a cultivar that bears    fruit with a shorter ripening period may allow the fruit to escape infection by the fungus through an earlier harvest.

Wounds are sites of entry for the fungus, so any measures that reduce wounding fruit, such as managing insects and mechanical damage, should help decrease fruit infections. Wounds that can be entry points for Colletotrichum spp. also make the fruit susceptible to other pathogens, such as bacterial soft rot. All crop debris should be destroyed at the end of the season to reduce inoculum survival for infecting subsequent crops.

Organic growers will need to consider crop rotation, scouting to detect and remove infected fruits, and applications of copper and/or biopesticides approved by the Organic Materials Review Institute.

Pam Roberts is a professor at the University of Florida Institute of Food and Agricultural Sciences Southwest Florida Research and Education Center in Immokalee.

This story was from the July edition of VSCNews Magazine. To subscribe, see http://vscnews.com/subscribe/.