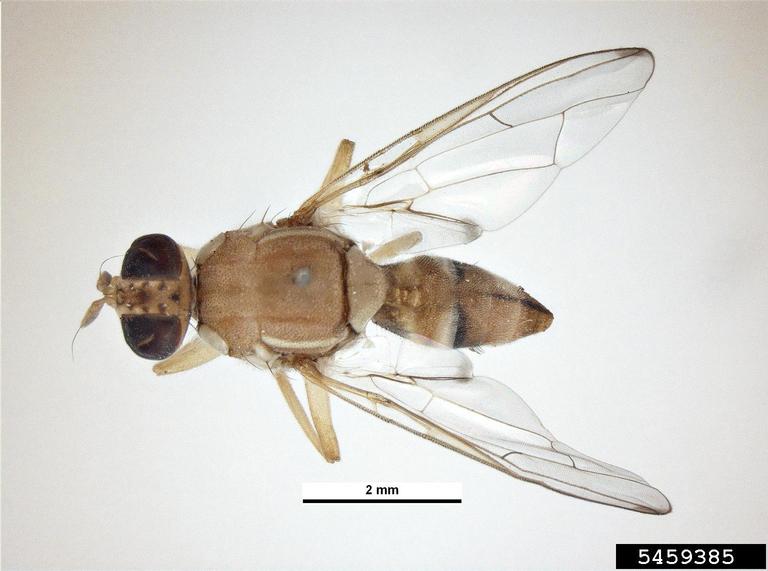 A male peach fruit fly, Bactrocera zonata (Saunders) (Tephritidae), was captured in a fruit fly detection trap on 9 May 2018 in Lake Worth (Palm Beach County). A second male was captured about 1.25 miles away, also in Lake Worth on 10 May 2018. This is only the second time that this pest species has been found in Florida. A previous detection was made in November 2010 in Miami-Dade County. Widespread in south Asia from Pakistan, India and Sri Lanka to southeast Asian countries such as Thailand, Laos, Vietnam and Indonesia. Introduced and established in the Arabian peninsula since at least 1982, well-established in Egypt since the late 1990s, also present on the Indian Ocean island of Mauritius. Outbreaks were reported in Israel in 2014 and Iraq in 2016. Detected numerous times in California since 1984 where an eradication program was conducted in 2013. It is not established there.

In India, the pest status of B. zonata is considered equal to or greater than that of the Oriental fruit fly (Bactrocera dorsalis) and the melon fly (B. cucurbitae), and they may overlap in the same crop. This pest is active throughout much of the year (Kapoor 1993).

Males are attracted to methyl eugenol. Detection of this and many other fruit flies depends on a widespread grid of baited traps in areas where introductions are likely to occur. Once a fly is detected, the trapping density is greatly increased for several square miles around the detection point. If further flies are detected, an eradication program may be implemented. As methyl eugenol is such a powerful attractant, an insecticide is added to the bait and flies are quickly annihilated.