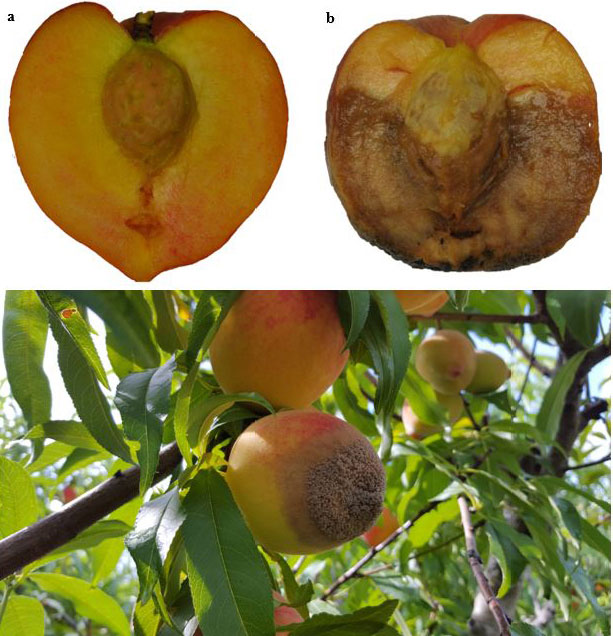 Brown rot, caused by Monilinia spp., is one of the most economically harmful fungal diseases for peach and other stone fruit growers worldwide.

Four Monilinia species have been found to cause brown rot. M. fructigena and M. laxa are two of the most common species found in Europe. Monilinia polystroma, an anamorphic species closely related to M. fructigena, has been described only in Japan. M. fructicola occurs in North and South America, Japan and much of Asia, Australia and Europe (a more updated distribution can be found at https://gd.eppo.int/taxon/MONIFC/distribution). In North America, M. fructicola and M. laxa are the leading causal species of brown rot, blossom blight and fruit rot in stone fruits (Martínez-García et al. 2013).

Brown rot fungus has the ability to attack blossoms, fruit, spurs (flower- and fruit-bearing twigs) and small branches under favorable conditions in the spring. Disease severity is dependent upon environmental conditions. Blossom blight can be expected in humid, rainy weather with mild daytime temperatures (68 to 77 degrees) and cool nights.

Mature fruit rot occurs at high temperatures in conjunction with high humidity. Under the right conditions, the entire tree’s crop can be completely rotted. Fruit susceptibility fluctuates with the various stages of development. Mature fruits are highly susceptible to disease, and fruit infection has the greatest impact on production.

In most years, and on farms that have had brown rot problems in the past, the most important applications of fungicides are made two weeks and again one week before harvest. If disease is active on the farm, fungicides may be needed at three weeks, two weeks and one week before harvest and may need to be continued through harvest. It is exceptionally important to follow label instructions for all pesticides.

Ali Sarkhosh is an assistant professor at University of Florida in Gainesville.