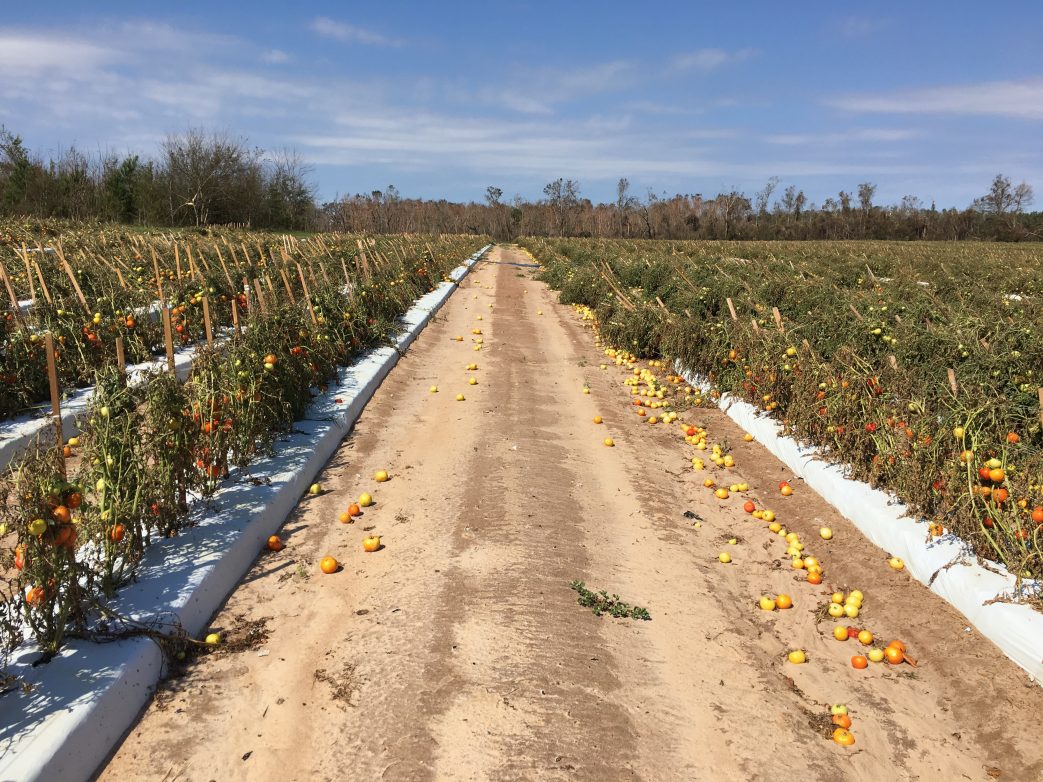 Hurricane Michael hit the Florida Panhandle hard. Farmers across this region have lost some, if not all, of their crops.

Josh Freeman, associate professor of horticultural sciences at the University of Florida Institute of Food and Agricultural Sciences North Florida Research and Education Center in Quincy, surveyed the area of Gadsden and Jackson counties for crop damages.

“We had a tomato crop here in Quincy, as well as pepper, squash and other cucurbits,” explains Freeman. “Jackson County’s crops are a 100 percent loss. There is nothing salvageable there. I think some growers had a thought to maybe salvage some of it, but it’s certainly not worth the money to go through it.”

Freeman says all of the tomato plants in the Jackson area have been blown over. “I think Gadsden County, which is where most of the tomatoes are packed, might have 10 percent of a crop left. A lot of that crop — I would say 75 to 80 percent of that crop — was blown over,” says Freeman. “They needed to make an attempt to harvest for insurance purposes, but my guess is they got about 10 percent of a crop that they’ll be able to sell, but it’s risky…”

Farmers are nervous about trying to pack what tomatoes they could salvage because they’re worried about post-harvest loss. If the growers do pack their tomatoes to be shipped, they could potentially lose more money if they break down in transit. They would either have to repack them or pay someone to dump them. These are concerns that growers have to think about as they assess their losses.

Farmers have gotten in touch with their insurance adjusters and with the Federal Emergency Management Agency and have started the cleanup process. “It’s not just crop loss,” explains Freeman. “Most of them have experienced loss to packing facilities. One individual lost an entire packing facility in Jackson County. A couple Gadsden County packing facilities had some damages. They’ve had damages to farm infrastructure, pump houses and plumbing.” Freeman added that many tomatoes were on the ground after Hurricane Michael came through.

According to Freeman, most of the farmers had only been in the process of harvesting for a day or two before the hurricane hit. Farmers have nothing to harvest now. They have capital expenses on packing facilities that they have to repair, and a lot of them had equipment damage and destroyed sheds. With no potential to recoup their investment, several farmers aren’t sure if they’ll be able to farm anymore because they don’t have the capital to redo everything and they’ll have zero income this fall. Without some type of federal assistance, they’re going to have major issues moving forward.

Freeman says vegetables are just one of the categories of crop losses. There’s also significant losses in cotton, peanuts and pecans. “There’s a staggering amount of loss in agriculture in North Florida and South Georgia,” he says.

Efforts are underway to secure aid, but Freeman expects it will take a long time for farmers to see any money. “The citrus industry just started receiving assistance from Irma in the last several months, and Irma happened a year ago!”

Freeman says tomato and pepper farmers have two seasons per year, spring and fall, and Hurricane Michael has essentially wiped out 50 percent of the year. “They’ve got maybe four to six weeks of market window in the fall, and all that is wiped out. And they have expenses to clean up and repair everything, with essentially no income,” he concludes.