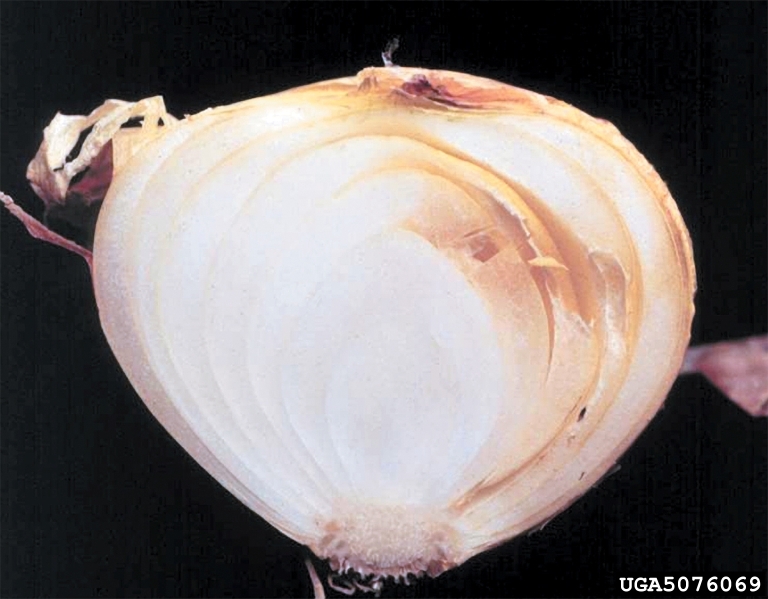 Vidalia onions are famous for their mild-sweet flavor and are a favorite of consumers and chefs across the U.S. Due to this popularity, there is also significant demand for organically-grown Vidalia onions.

Soil-borne bacterial diseases like sour skin and slippery skin caused by Burkholderia sp. impact quality and yield of organic onions in Georgia. The pathogens are soil-borne. Current organic management practices do not eliminate or eradicate them from the soil.

Warm temperatures and intermittent rainfall during the spring can predispose organic onions to infection with these bacterial pathogens. Vidalia onion growers experienced similar weather conditions (warm and wet) this past spring. This led to considerable yield losses both in the field and in storage.

Sour skin was also worse last year for producers. It is usually more of a problem during harvest in the latter part of the growing season. As it thrives in warm conditions, symptoms can manifest earlier in the season depending on temperature. The disease can progress from the upper foliage to the leaves in the lower part of the plant and then to the bulb’s outer scales.

Bulbs that are infected with sour skin usually have an acrid, sour odor and other foul odors that are associated with secondary organisms. Bulbs will turn reddish-brown to brown in color over time, as the tissues rot and copious amounts of fluids are produced.

Organic onion growers need management strategies that are not just effective but also economically and environmentally sustainable. The UGA Vidalia Onion Research and Extension Group is researching organic and physical soil-amendments that can reduce soil-borne pathogens including Burkholderia sp.

The amendments like soil solarization, soil-biofumigation (wild mustard), soil-applied biological controls and cover crops will be evaluated in certified organic fields at UGA.

“With respect to sour skin, which is one of the worst diseases you can ever have on onion; on organic onion, this disease is particularly bad. The pathogen survives in the soil and stays in the soil. Any management options, like the use of copper or use of any chemicals, which you cannot use; you can use some kind of copper in organic (production), but it doesn’t have much efficacy on management of sour skin,” Dutta said.

UGA scientists also plan to evaluate the impact of these amendments on reducing weeds, plant-parasitic nematodes and other soil-borne fungal and oomycetes organisms. Researchers will also focus on studying the impact of these amendments on soil-microbiome and prevalence of insect natural predators and enemies. The aim is to foster the “systems approach” without negatively altering the diversity and prevalence of both beneficial microbes and natural enemies.