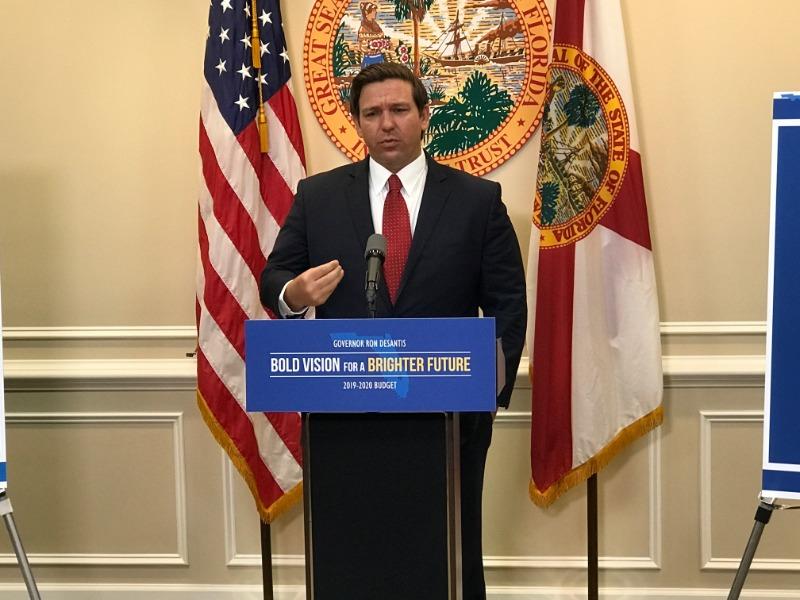 Gov. Ron DeSantis admits being worried that he asked for too much in his environmental-funding request.

But as the House and Senate move forward with their budget plans, maybe he should have gone bigger.

“I’ve got to say I’m pretty pleased where they came in, particularly on this water quality,” DeSantis said Thursday after appearing at a gathering of the Florida Association of Counties Water Policy Committee in the Old Capitol.

As part of a four-year, $2.5 billion environmental plan, the rookie governor asked lawmakers for $625 million to support Everglades and water-quality projects.

The House budget proposal includes $658.5 million in environmental spending, while the Senate has proposed $656 million.

“I thought we were going to be haggling towards the end, where I’m like ‘we need more money for the Everglades,’ ” DeSantis said. “Actually, we’re pretty much going to get there no matter what happens at this point.”

DeSantis is planning to push for all his priorities, including a request for $100 million for the Florida Forever land-preservation program. He also is seeking $50 million to match the minimum required by law for the state’s natural springs, $50 million for beach projects, $54 million for state park enhancements, and $20 million for citrus protection and research.

Choom may — or may not — be opening in the Sunshine State anytime soon. But it gets some points for chutzpah, if nothing else, in claiming White House ties.

“Yes, that same sweet, sticky sensimilla that led (President) Obama from Waikiki to the White House will be coming to a Choom store near you,” Canada-based Choom Holdings Inc., says on its website.

The company announced Monday it intends to enter Florida’s medical marijuana market, with part of its “strategy to become a multi-state operator,” through its wholly owned subsidiary, Choom USA Holdings Inc.

Choom, which trades on the Canadian Stock Exchange, signed a letter of intent to purchase a 95 percent equity interest in “a Florida-based vertically-integrated cannabis applicant,” according to a news release.

The release doesn’t state the amount of the transaction or identify the name of the “applicant,” which is clearly not one of the state’s 14 licensed medical marijuana operators.

The Florida company “is progressing on its Master License application to operate up to 25 retail locations with potential for more as the number of registered patients increase, as well as, a micro-processing and cultivation facility for medical purposes,” the release said.

As for Choom’s links to Obama, the company boasts the former president was an integral member of the “Choom Gang” back in Honolulu, where he graduated from high school in 1979.

Obama was part of a group of buddies who “loved to choom the pakalolo,” or smoke weed, according to the website. Details are taken from a 2012 biography by David Maraniss entitled “Barack Obama: The Story.”

FILM INDUSTRY GETS LOVE, NOT MONEY

Senators showed some love this week for the film and television industry. But that is all the industry likely will get from the Legislature.

As the Senate Commerce and Tourism Committee backed a resolution (SB 1808) encouraging the continued collaboration of public- and private-sector efforts, members of the panel expressed disappointment the state isn’t doing more to attract and maintain the industry.

“I hope we can move forward and maybe not this year, but next year, and find some funding,” she continued.

With House leaders showcasing a list of questionable deals and contracts by economic-development and tourism agencies, the state has lost its appetite for a wide range of incentive programs.

But prodded by Senate Commerce and Tourism Chairman Joe Gruters, R-Sarasota, Film Florida Executive Director John Lux estimated that the state has lost more than 87,000 cast and crew roles the past four years to more competitive states, with students from the Ringling College of Art and Design Film Department, Full Sail University and other film schools leaving for the jobs.

“We’re constantly being told that their students are graduating and immediately packing bags to go to Georgia, North Carolina and Texas,” Lux said.

Gruters has pitched a bill (SB 526) that sought to provide tax breaks to the industry, but the measure is stalled.

A state incentive program for film and television has languished since a $296 million fund was created in 2010. By offering grants on a first-come, first-served basis, the money quickly went out the door.

Sen. Victor Torres, D-Orlando, indicated he is baffled Florida is letting jobs go to other states.

Torres said he “used to watch from New York, everything was Miami. What happened? Why did we lose interest in an industry that promotes us?”

Miramar Mayor Wayne Messam upstaged an event he is holding Saturday at Florida Memorial University by announcing Thursday he is entering the 2020 race for president.

Joining a wide field of Democratic challengers, Messam talked in a video about his parents’ sacrifices as immigrants and the desire to “restore the American Dream for all Americans.”

“We must recommit to making the American Dream an achievable reality once again — whether someone wants to go to college, start a business, learn a trade, own a home, or start a family,” Messam said in the video.

TWEET OF THE WEEK: “Now is the time for the Florida legislature to help. Just like last year. Mental health is a bipartisan issue. While we are in session NOW is the time.” — Florida Division of Emergency Management Director Jared Moskowitz (@JaredEMoskowitz) after the suicides of two students who survived last year’s massacre at Marjory Stoneman Douglas High School.