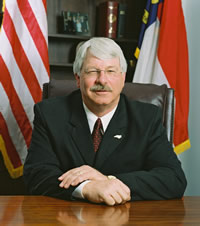 “North Carolina’s agricultural roots run deep and our state has been looked to as a model for others because of a long history of outstanding leadership,” Troxler said. “The scope of contributions all three of these men have made is truly impressive, and it is an honor to recognize them.”

Fred Colvard was a progressive and entrepreneurial farmer who helped develop crops suited to the North Carolina mountain areas. He was one of the first to commit 40 to 50 acres of land to growing Christmas trees in the area, ushering in a new crop on a commercial scale. He also was among the first to use irrigation in the area to ensure high quality crops.

But Colvard was better known for developing the blight-resistant Sequoia potato, which is credited with ending a potato famine in Peru.

In nominating Colvard, Sam Shumate wrote, “when I decided to write an article on Colvard Farms for a monthly series, my research revealed a progressive farmer far ahead of his time.”

In developing the potato, Colvard leased an island off the coast of Florida where he planted the potatoes. The sub-tropical climate there allowed him to plant two crops of potatoes in a season, cutting his experiment time in half.

When potato blight threatened a variety that was significant part of Peruvian diets, an agricultural delegation from the country went to the Colvard Farm to see more about his work with a blight-resistant potato. The delegation returned to Peru with some of the newly developed seed potatoes, leading to the end of the famine.

John Holman Cyrus was a pivotal figure with regards to the state’s tobacco industry, serving for 37 years with the N.C. Department of Agriculture in various capacities, including Tobacco Program Administrator.

During his tenure, tobacco was the state’s top commodity and top crop grown by thousands of farmers statewide. The industry’s influence stretched well beyond the farms and rural communities to larger cities where tobacco manufacturing and warehouses employed many workers and supported hospitals, universities and cultural programs.

In nominating Cyrus, N.C. State Grange President Jimmy Gentry noted that he “helped facilitate change in the growing and marketing of tobacco, working with growers to keep lower stalk leaf off the market to improve prices, and in the transition from selling tied tobacco to loose leaf tobacco. The loose-leaf system lead to innovative handling and packaging practices at the warehouse.”

Following his retirement from NCDA, Cyrus continued his work on behalf of the industry, serving with the Tobacco Advisory Council, the Tobacco Tax Council and N.C. State University Tobacco Foundation. He also served as a lobbyist and consultant on tobacco issues for the N.C. State Grange for over 20 years.

Marshall W. Grant’s name will likely forever be linked to cotton, thanks to his vision, drive and leadership in helping establish the Boll Weevil Eradication Program, a voluntary assessment program for cotton farmers which continues today.

In nominating Grant, David Parrish, chief operating officer of the N.C. Cotton Producers Association, credits Grant’s work to leading “to the eradication of the most destructive pest in the history of cotton, thereby restoring the economic viability of cotton production for generations of farmers in North Carolina and across the Cotton Belt.”

By the late 1970s, North Carolina had seen cotton production drop from a high of almost 2 million acres to around 40,000 acres because of the destruction by the boll weevil.

Grant organized a group to hire cotton scouts and began regional control efforts, but soon realized that to be effective these efforts would need to be broader to keep the boll weevils from migrating to nearby fields, other regions and other states.

When the National Cotton Council decided to proceed with a full-scale boll weevil eradication trial, Grant volunteered for North Carolina to be a trial location and then traveled extensively across the state helping organize eradication committees and educating producers on the program’s importance and the need for grower funding.

That early trial helped establish the foundation and structure for the Boll Weevil Eradication Program that exists today. In 1985, North Carolina declared the state boll weevil free and cotton production today has returned to a 500,000-acre level. Today, monitoring and trapping of cotton fields continue to ensure any re-emergence of the destructive pest is dealt with quickly.

The economic benefits of the Boll Weevil Eradication Program to producers are estimated at $644 million annually. It is also estimated that 10 million pounds fewer insecticides are used to produce the U.S. cotton crop.

All three nominations received unanimous approval from the Hall of Fame Board of Directors. A ceremony honoring the three will be held at a later date.