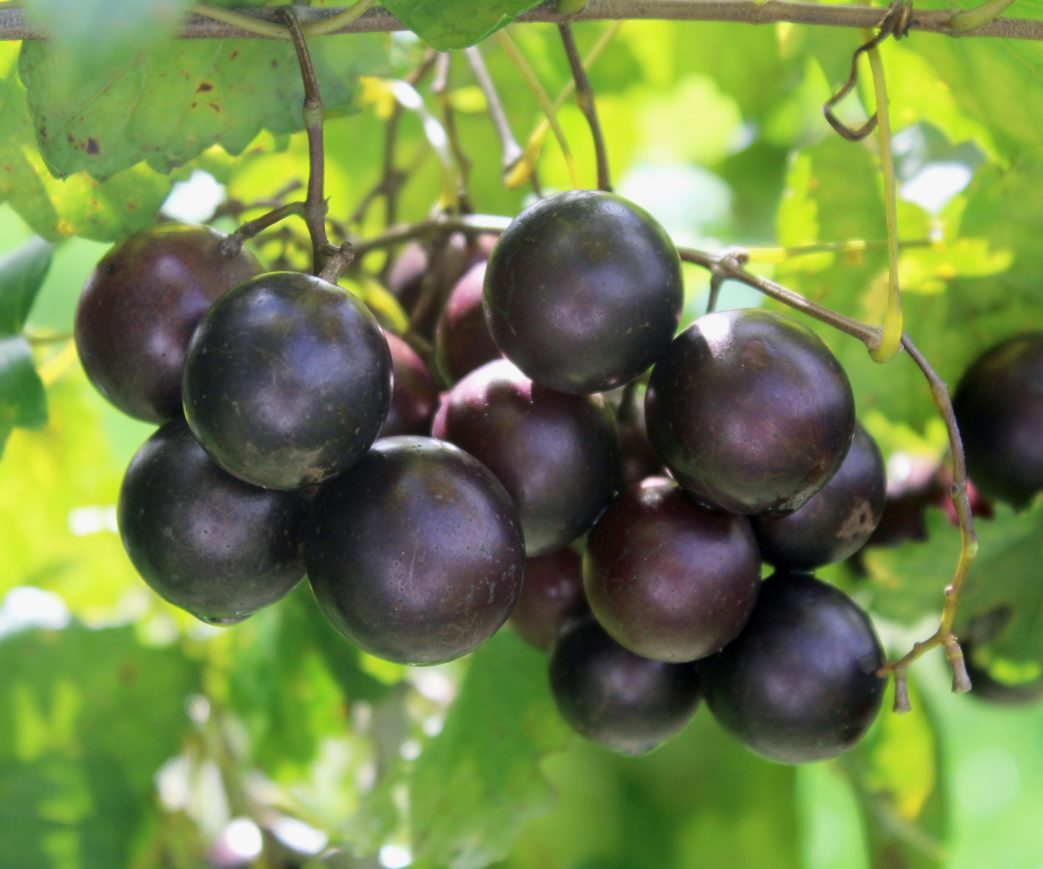 By Manjul Dutt and Ali Sarkhosh

Native to Florida and the southeastern United States, the muscadine grape (Vitis rotundifolia) is a lesser known relative of the European grape (descended from Vitis vinifera) that is popular worldwide for fruit consumption and wine production. A related species (Vitis munsoniana/Vitis rotundifolia var. munsoniana) is commonly present in the central and southern parts of Florida and is sometimes mistaken for muscadine grape.

In Florida, wild muscadine grapes can be ubiquitous, with the vines growing happily among various oaks and other native trees. Sometimes, a few of them can reach several 100 feet in length, integrating well into the forest landscape.

Wild muscadines were collected by settlers of the southeastern United States, and all commercial cultivated varieties have been developed from these collections. The first named muscadine variety, Scuppernong, was collected from a wild vine near the Scuppernong River in North Carolina.

Muscadine grapes are low-maintenance crops that grow well in areas of high humidity and are tolerant to many insect and disease pests. Most commercially grown muscadines are highly resistant to Pierce’s disease. A minimal spray program with an occasional fungicide is required only in exceptionally wet years to control some fungal problems. Wasps can sometimes be a minor issue, building nests within the vines.

Muscadine improvement through selective breeding between good parents took place at the Agricultural Research Center in Leesburg, Florida. From 1959 onwards, several improved muscadine cultivar trials were initiated at Leesburg, and promising selections were subsequently propagated and evaluated at multiple locations (in North Carolina, Georgia and Mississippi) before release.

Since the late 1960s, muscadines have become commercially important in the South following the release of several Pierce’s disease-resistant cultivars with superior eating qualities from the breeding programs in Georgia, North Carolina and other southern states. The varieties released by the University of Florida (UF) are listed in Table 1. The groundwork for an active grapevine improvement program at UF was laid by the late John Mortensen, who joined the Leesburg Agricultural Research Center in 1960 and developed most of the UF-released varieties. Mortensen retired in 1991, and since then, there has been no active conventional breeding effort at UF.

A prerequisite for commercial success in Florida is the resistance to Pierce’s disease. This bacterial disease results in grapevine mortality in susceptible cultivars. Pierce’s disease is spread by small insects called sharpshooters. Sharpshooters are widely present throughout the southern United States and are one of the primary reasons non-native grapes, such as the widely popular European wine grapes, cannot be grown successfully in Florida in the long term. Additionally, varieties must possess other fungal and bacterial disease tolerances to be successful in Florida’s heat and humidity.

Some consumers who are not accustomed to muscadines do not like the typical muscadine aroma, which can be very different from that of vinifera grapes. Varieties with different aroma profiles could be successful. Varieties that have different flavor and aroma profiles will contribute to a growing niche market and popularize the grape to a wider audience. Furthermore, varieties that can mature over a longer duration from early summer to before the first frost are desirable to extend the harvest and marketing seasons.

Varieties that produce fruits with a thin edible skin and crisp flesh are desirable and should preferably contain small/shriveled seeds or be seedless. Most commercial varieties are either black or bronze, but varieties with a wider range of colors are commercially desirable. An example of a muscadine that is neither bronze nor black is the newly released RubyCrisp cultivar from the University of Georgia. This cultivar, recommended for homeowners, is dark red in color.

Muscadines are also highly perishable, which hampers their expansion to non-traditional marketing areas. Newer varieties with an enhanced shelf life can reduce perishability issues. Additionally, fruits should have a dry stem scar to prevent damage during picking and spoilage during storage and shipment.

Muscadine grapes are notable for their high pigment and polyphenols content, especially those with a thick skin. Polyphenols are considered superfood components. In the human diet, these components can contribute to health and prevent disease.

As muscadines are tolerant to several common grape fungal and bacterial diseases, both commercial growers and homeowners can successfully grow muscadine grapes with a low input of pesticides. This is one of the main reasons for the popularity of muscadine as a sustainable fruit crop in the southeastern United States. The commercial acreage of muscadines in Florida is estimated to be 1,500 acres.

In Florida, the most successful commercial plantings comprise large-fruited cultivars, such as Supreme for the fresh market, and high-yield cultivars, such as Carlos and Noble, for juice and wine production. U-pick operations are very common in fresh markets, and many growers market their products directly to consumers using roadside markets, farmers’ markets, local sales and other direct-to-consumer marketing strategies. Commercial muscadine vineyards that are based on juice or wine grapes generally offer on-site wine tasting.

Manjul Dutt is a research assistant scientist at the University of Florida Institute of Food and Agricultural Sciences (UF/IFAS) Citrus Research and Education Center in Lake Alfred. Ali Sarkhosh is a UF/IFAS assistant professor in Gainesville.