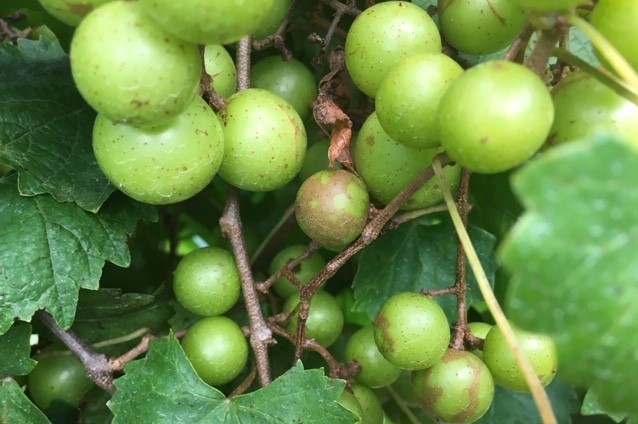 Muscadines are already a valuable commodity in North Carolina. If N.C. State researchers can determine how to extend their freshness, the crop’s value would really shine, says Penelope Perkins-Veazie, professor in horticulture science at N. C. State.

“Normally, a fresh market seeded muscadine will easily last four weeks with low temperature storage. We hold them close to 32 degrees without anything else in the clam shells, and they’ll last about four weeks. The problem is, we want them to last eight weeks. So, what do we do?” Veazie said. “We could probably manage to get decent muscadines to six weeks. That’s great news. That’s one-third longer than they used to be. The question is the last two weeks. How do we get to eight weeks?”

Muscadines quickly lose their freshness after six weeks. They lose their aesthetic appeal, which renders them unmarketable.

“The biggest problem we have once they get old is they start to mold. You get mold and little white fuzz growing on them,” Veazie said. “They’re not very appealing to look at. What’s happening is they’re losing their gloss. They just don’t look appealing anymore to a consumer. They just don’t have that pretty, shiny look to them.

“People who know muscadines go, ‘Those look old to me.’ People who don’t know muscadines probably would buy them. But you figure consumers would get savvy in a hurry. You’ve got to be prepared for them going, ‘This one doesn’t look attractive anymore.’”

Normal management practices to help commodities stay fresh for an extended period of time don’t impact muscadines, unfortunately. Sulfur dioxide is not an option. Muscadines also do not respond when atmospheric conditions change; increasing carbon dioxide and reducing oxygen to put the grape to sleep.

“Right now, with muscadines, what I’m seeing is they’re not very responsive to that either,” she said. “There’s so many things that grapes don’t respond to.”

So, research continues. But once it determines how to extend muscadines’ freshness, then growers will be able to market them overseas, specifically, to one country.

“The reason we want them to last eight weeks, we want to take them to China. We need a container ship system which is going to take four to six weeks just to get it there,” Veazie said. “China really likes muscadines.”