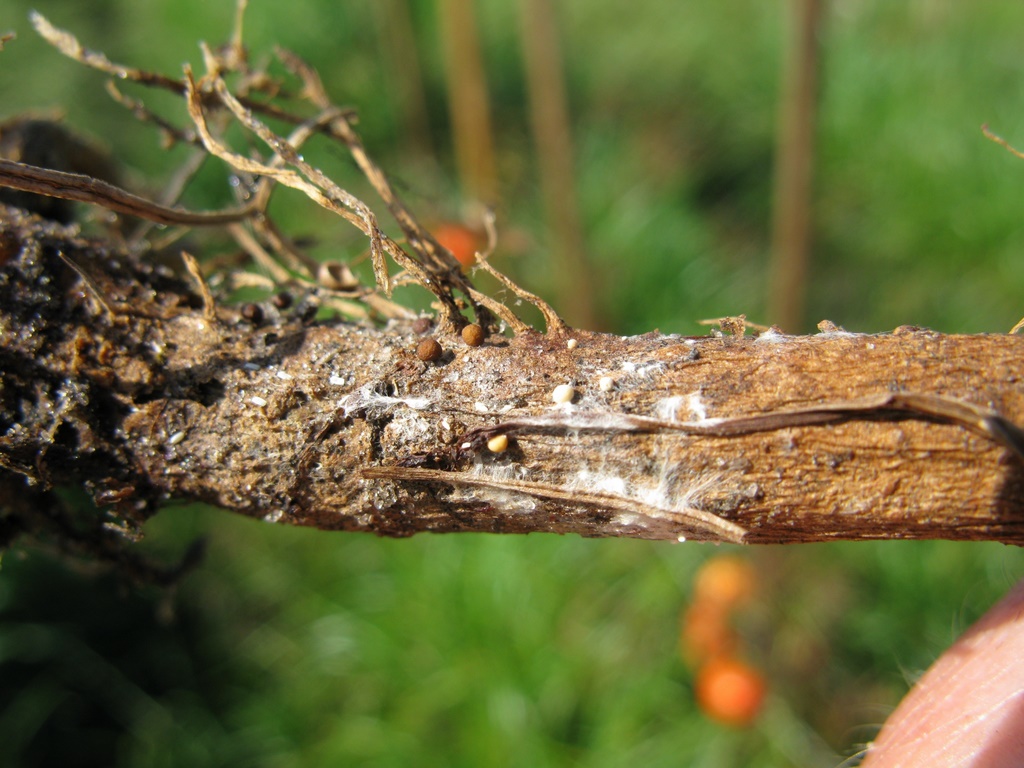 Southern blight is a severe disease of vegetables that favors warm and wet weather common to production in the Southeast. The disease is caused by the soilborne fungus Athelia rolfsii (synonymous with Sclerotium rolfsii), which has a broad host range of over 1,200 plants. Since the phaseout of methyl bromide, outbreaks of southern blight have increased on tomato, pepper and cucurbit crops.

SYMPTOMATIC SIGNS
The initial symptom on pepper and tomato consists of a reddish to tan lesion that develops on the crown at the soil line. As the lesion progresses, plants will display diurnal (during the day) wilting until the plant fully succumbs, resulting in a green wilt. Symptoms can progress rapidly under favorable weather conditions.

The wilting can be confused with bacterial wilt caused by Ralstonia solani. However, unlike bacterial wilt, a conspicuous, coarse white mycelium (the vegetative part of a fungus) is often visible at the crown of symptomatic plants. With favorable conditions, mycelium is often observed on the soil surface at the base of the plant and will even extend beneath the mulch in plasticulture systems.

Mycelium is often accompanied by small, round structures called sclerotia that are about the size of a mustard seed (0.3 to 3 millimeters in diameter). Sclerotia are initially white but turn yellow to tan or dark brown as they mature. Sclerotia are the primary reproductive structures of the fungus that can survive for several years in the soil. Fruit symptoms on tomato, pepper and cucurbit crops are limited to fruit in direct contact with the soil and consist of a watery rot accompanied by the same coarse, white mycelium and abundant sclerotia.

The disease is not restricted by plant age as much as it is by soil conditions. However, transplants are quite sensitive and will quickly succumb, while older plants with woody stems will limit disease to cortical tissues that eventually die due to girdling. Sclerotia tend to remain aggregated in the soil with plant debris, leading to patchy distribution of the disease in the field. Outbreaks limited to corners or edges of fields are common. However, continued cultivation between seasons eventually spreads inoculum down field rows.

INTEGRATED MANAGEMENT
Chemical options for the management of southern blight are limited, so developing an integrated strategy that utilizes cultural practices is highly encouraged. Either avoid planting in fields with a history of southern blight, or, if feasible, adjust planting dates for those fields to avoid soil conditions that favor disease development. Establishing long rotations (at least 12 months) for problematic fields with a grass crop (or cover crop) or fallow period can also help reduce the number of sclerotia in the soil.

Only sclerotia at the soil surface will infect plants, so plowing practices can be applied to bury and destroy sclerotia. Where practical, remove infected plants to minimize the buildup of sclerotia in soil. Maintaining recommended soil pH for vegetable production is important, as low soil pH favors southern blight.

The at-plant application of Blocker (pentachloronitrobenzene) was once the preferred chemical control option for many growers. However, recent label changes regarding handling have excluded its use in many commercial settings. Several Fungicide Resistance Action Committee (FRAC) 11 fungicides are labelled for southern blight. These include Aftershock (fluoxastrobin), Evito (fluoxostrobin) and Cabrio (pyraclostrobin). FRAC 7 fungicides, such as Fontelis (penthiopyrad), Aprovia Top (benzovindiflupyr + difenoconazole) and Priaxor (fluxapyroxad + pyraclostrobin), are also available for southern blight.

Field trials have shown good success with these conventional fungicides. However, timing fungicide applications prior to disease development is critical for effective control. Depending on the season, this may require transplant applications followed by repeated drip applications. Be sure to review labels for application instructions, seasonal limits and use restrictions, as these fungicides are commonly used for foliar diseases.

Biopesticides and other organic-approved materials have not given satisfactory control of southern blight in field studies.

Gary Vallad is an associate professor at the University of Florida Institute of Food and Agricultural Sciences Gulf Coast Research and Education Center in Wimauma.