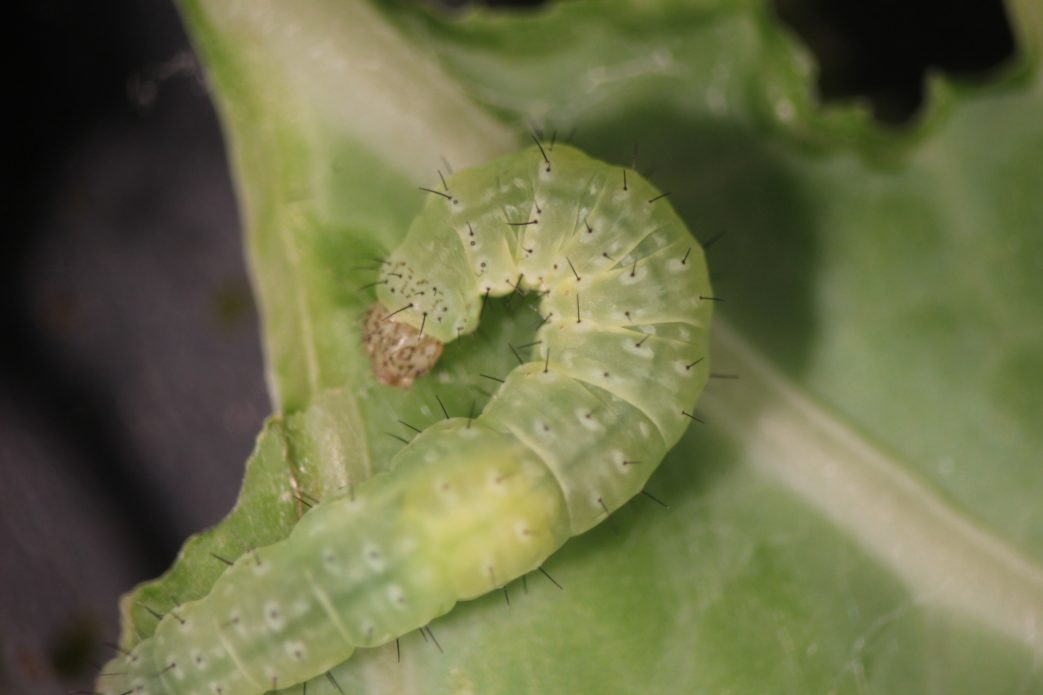 Diamondback moth larvae are small green caterpillars with a pair of prolegs on their posterior end that form a V shape. This helps distinguish them from other caterpillars commonly found attacking crucifers, including imported cabbage worm and cabbage looper. It takes about four weeks from egg to emergence of adult from the pupa for this pest.

In Florida, diamondback moth is primarily a problem in green cabbage and Napa cabbage. Young diamondback moth larvae feed on the surface of the leaf, producing “windowpane” type damage. There are many weeds in Florida in the crucifer family that serve as hosts for diamondback moth, including yellow rocket, shepherd’s purse, pepperweed and wild radish.

There are at least three types of parasitic wasp in Florida that attack either the larval or pupal stage of diamondback moth. Early-season reliance on Bacillus thuringiensis (Bt) products does not interfere with the activity of these natural enemies and can offset the severity of infestations.

Table 1 lists some of the insecticides that demonstrated efficacy against diamondback moth collected from Florida cabbage fields in the spring of 2019. The mode of action number for each group is indicated in the central column. Insecticides with the same mode of action group can be applied more than once within a 30-day treatment interval, which starts when the first application of a given mode of action is made. Distinct modes of action should be used for each 30-day interval once insecticide applications are initiated.

The diamide insecticides (mode of action group 28) are important for management of diamondback moth larvae. If cabbage is being planted when diamondback moth populations are known to be present, the grower should consider a transplant tray treatment of Verimark (cyantraniliprole) or an at-plant treatment of Verimark or Coragen (chlorantraniliprole). At-plant treatments in cabbage would typically be applied with a water cart.

Verimark and Coragen can also be applied near the root zone via shank injection. However, this is not optimal because these two insecticides are not highly mobile in the soil. Application via drip tape is another option, but the use of drip tape in cabbage is not common.

Diamide insecticides that can be applied to the foliage are Coragen, Exirel and Harvanta 50SL (cyclaniliprole). The active ingredient in Exirel is cyantraniliprole, the same as in Verimark, which can only be applied via transplant tray or in the soil. Consult the insecticide labels for specific rates and instructions and remember applications of diamides should be confined to a 30-day interval, after which distinct modes of action should be used.

Bt remains a useful tool for controlling young diamondback moth larvae. It is advised that application of products with the aizawai strain of Bt (Agree WG or XenTari DF) be alternated with products formulated with the kurstaki strain of Bt (Biobit HP, Crymax WDG, DiPel DF or Javelin WG).

For a fuller list of insecticides registered for management of caterpillars in brassicas, see the 2019–2020 Vegetable Production Handbook of Florida. For additional information on diamondback moth, including images and links to help distinguish it from imported cabbage worm and cabbage looper, visit http://entnemdept.ufl.edu/creatures/veg/leaf/diamondback_moth.htm.