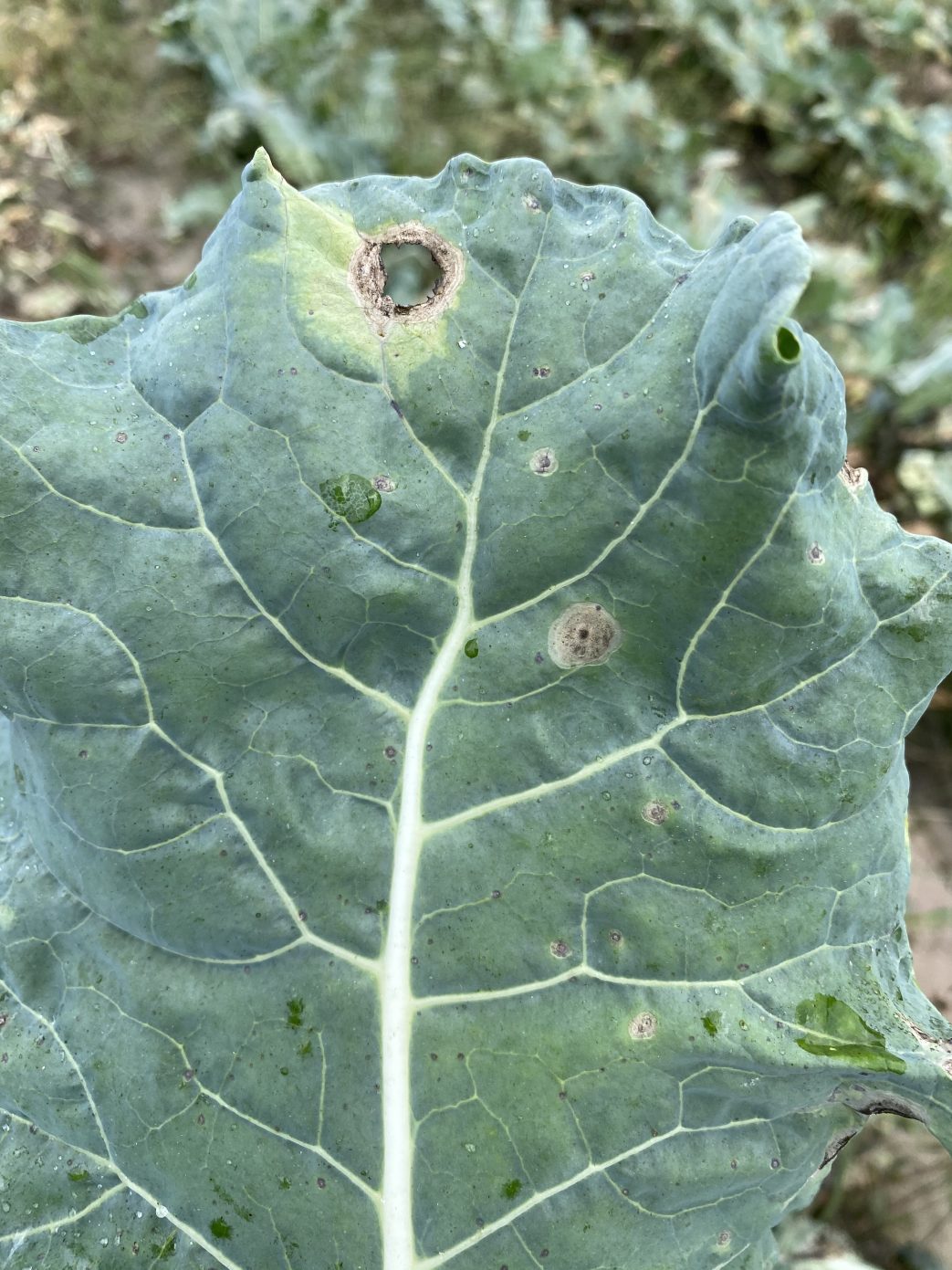 By Bhabesh Dutta and Aparna Petkar

Alternaria blight and head rot (ABHR) of broccoli and other brassicas is caused by several species in the genus Alternaria, including A. brassicicola, A. brassicae and A. raphanin. All these species can cause significant economic losses.

These fungi are facultative pathogens that primarily survive in crop debris, although chlamydospores and microsclerotia are known to occur and survive in soil. Disease develops at temperatures between 68 and 86° F, and prolonged leaf moisture favors spore production.

Alternaria fungi can be disseminated in multiple ways, including wind-blown spores, rain splash, via infested seeds, and by field equipment, people and animals. A heavy load of seedborne inoculum can result in damping-off.

In broccoli, apart from the foliar and stem lesions, spots and lesions can also occur on heads, which can result in rot. Losses in storage are especially troublesome due to production costs and storage expenses including utilities and labor to grade, repacking, and disposal of culls. The exact cost of this disease is difficult to calculate, but nationwide it is safe to estimate that millions of dollars are lost annually.

Traditional cultural practices for broccoli growers to manage disease include:

Despite following these measures, ABHR has continued to be a concern for broccoli growers, which warrants reevaluation and optimization of cultural practices to limit economic losses.

Historically, broad-spectrum protectant fungicides, such as chlorothalonil, were used to control ABHR. However, site-specific fungicides are preferred because they have systemic activity and are more effective.

The site-specific QoI fungicides, such as azoxystrobin, are now the most widely used, yet efficacy is failing. Although detection of the mutation conferring QoI-resistance has not been reported yet in A. brassicicola or A. brassicae, loss of efficacy in the field and preliminary results of in-vitro testing suggest resistance is present and may be widespread.

Resistance to QoI fungicides is now suspected in Georgia and Virginia. Fungicide resistance is a serious concern because once it is established within the pathogen population, producers will not be able to use QoI fungicides, which are some of the most effective and widely used fungicides for managing ABHR.

By the time a grower observes that fungicide applications are no longer effective, fungicide resistance in the pathogen population is already present. Therefore, rapid diagnostic tools are needed that can identify fungicide resistance before fungicide applications are no longer efficacious. In the case of ABHR, this problem is compounded by a lack of knowledge on whether there is a new species present and unknown pathogen population structure within fields, which directly limits the ability to design targeted and effective disease management strategies.

To address this problem, ongoing research funded by the U.S. Department of Agriculture National Institute of Food and Agriculture Specialty Crop Research Initiative is underway. It is led by the University of Georgia (Bhabesh Dutta) along with collaborators from Virginia Tech (Steve Rideout and David Langston), Cornell University (Chris Smart and Christy Hoepting) and University of Nebraska (Sydney Everhart). The project aims to reduce economic losses in broccoli production caused by Alternaria sp. by providing growers with tools for making informed management decisions that increase profitability.

Genomics, population genetics and fungicide resistance profiling are being used in the project to characterize population structure and develop diagnostic tools for Alternaria sp. causing ABHR in broccoli. The project is examining if different sources of inoculum and production practices exist that contribute to ABHR outbreaks. The goal is to develop management programs that are environmentally and economically sustainable.

This project will provide an opportunity for screening commercial cultivars along with some new entries from seed industries in Georgia, New York and Virginia. Researchers will also assess the role that seeds and weeds may play in ABHR infection. Field and greenhouse trials with naturally and artificially infested seeds will be used to assess seed-to-seedling and seedling-to-seedling transmission.

Further chemical and biological seed treatments will be utilized to reduce seed infection and seedling transmission in broccoli. Researchers are in the process of conducting economic and stakeholder advisory panel assessments from regional trials each year that will enable them to determine the cost-benefit trade-off of recommended management strategies.

Several commercial broccoli fields in Georgia in fall 2020 were surveyed for ABHR; around 105 Alternaria sp. isolates were collected. These isolates are currently being characterized for their species identity, pathogenicity and aggressiveness on brassica hosts and sensitivity to QoI fungicides. In addition, field trials are underway to generate Alternaria-infested broccoli seeds, which will later be used to establish if the pathogen can be seed-transmitted. Later, several chemical and biological treatments will be utilized to assess if the pathogen can be eliminated from the broccoli seeds.

Visit alternariabroccoliproject.uga.edu/welcome for updates on the progress of this project.

Bhabesh Dutta is an associate professor and Extension vegetable disease specialist; Aparna Petkar is a postdoctoral research associate — both at the University of Georgia in Tifton.