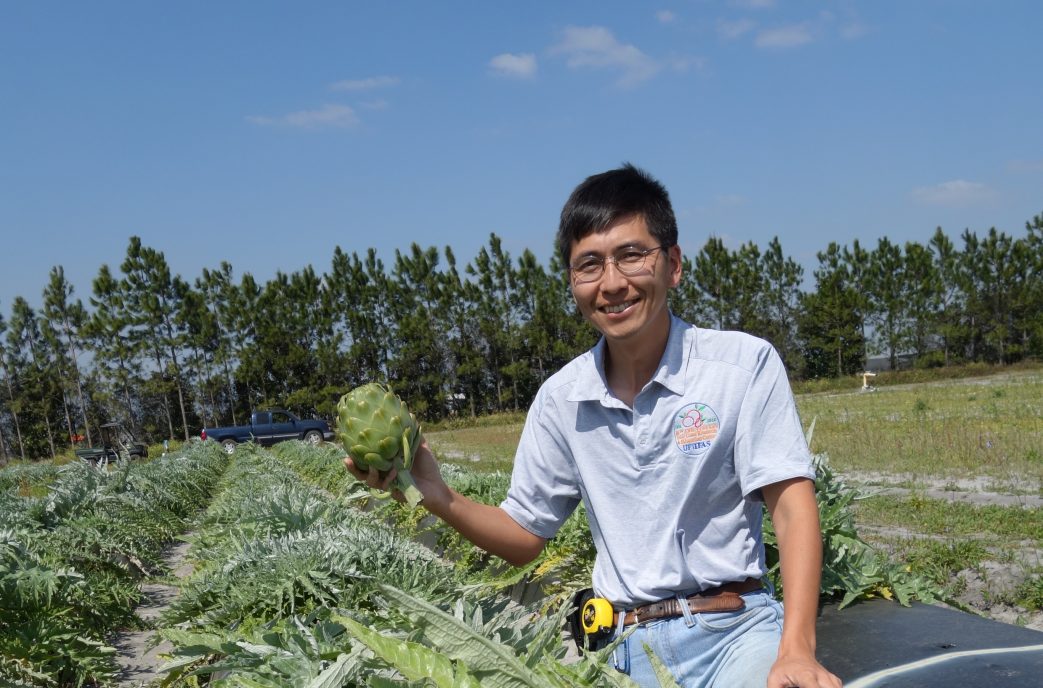 GAINESVILLE, Fla. — Artichokes might grow in Florida’s subtropical climate after all — good news for those who crave the taste and antioxidants of the food crop.

Shinsuke Agehara, a University of Florida assistant professor of horticultural sciences, presented his preliminary findings to the Florida State Horticultural Society June 5-6. In his talk, he said that the ‘Imperial Artichoke’ shows the most promise of growing in Florida’s warm, humid climate. Growers will need to use a natural plant hormone called gibberellic acid to maximize growth.

With help from the acid, the artichoke can produce as much as 6,000 pounds of ‘Imperial Artichoke’ per acre, said Agehara, a faculty member at the Gulf Coast Research and Education Center, part of the UF Institute of Food and Agricultural Sciences. By comparison, California producers can grow up to 13,500 pounds of artichokes per acre. That’s because it’s cooler there.

California grows 99 percent of the nation’s artichokes, which flourish in a cool environment. A warm winter might present an obstacle for Florida growers. To form buds, artichokes generally require at least 250 to 500 cumulative hours below 50 degrees. Therefore, flowering must be artificially induced to produce artichokes in Florida.

“Chilling is the artificial signal to induce bud development for artichokes,” said Agehara. “Once we optimize the hormone application rate, I think we can increase the yield closer to the commercial yield in California.”

Last year, Agehara received a $90,000 grant from the U.S. Department of Agriculture to see if he could grow artichokes at the research center in Balm, Florida.

Agehara is interested in trying to help Florida farmers grow artichokes because small growers want alternative crops that are attractive and profitable. The retail price of an artichoke can be up to $5, and each plant can produce several buds, he said. Thus, the production value of artichokes is very high.

Additionally, consumers like artichokes because they’re high in antioxidants and nutrients, including folate and dietary fiber.

“The appeal of the artichoke in the global food market would be the high antioxidant value, as consumers are becoming more aware of health benefits of ‘functional food’ in recent years,” Agehara said.