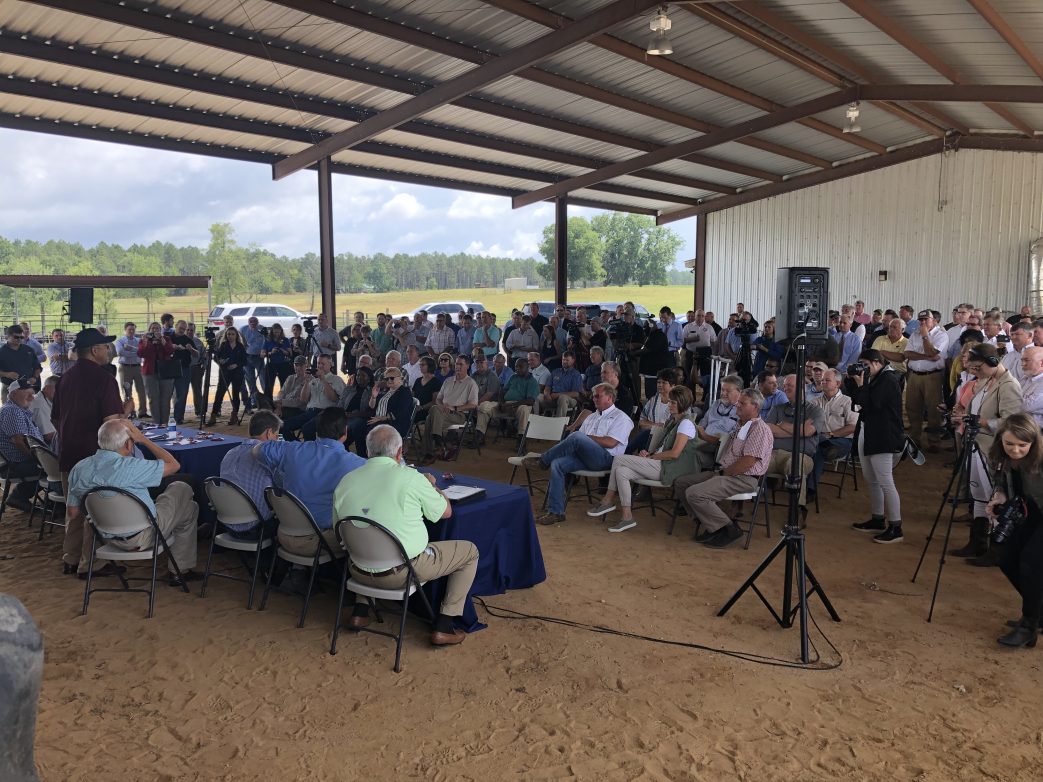 It was a busy Friday in the Southeast for U.S. Secretary of Agriculture Sonny Perdue as he and other legislative leaders sat down with representatives from Florida and Georgia agriculture on June 7. The day started with a meeting in Tallahassee, Florida, followed by a meeting in Doerun, Georgia. The main topics of discussion were the U.S.-Mexico-Canada Agreement (USMCA) and what’s next for disaster relief.

AgNet Media Founder and President Gary Cooper attended both meetings and was able to catch up with some of the attendees afterward.

Hoblick focused his comments on disaster relief. Although it is a huge win to have the disaster package signed into law, Hoblick feels it is crucial to discuss what’s next as far as doling out these funds to producers who need them. “We need to find ways to expedite funds to our producers out here,” he said in an exclusive interview with Cooper.

Hoblick also expressed his gratitude for Perdue taking the time to travel to Florida and listen to concerns plaguing the state’s agriculture industry.

Fried was very pleased with how the meeting went and the turnout of key agricultural players in Florida. In an interview with Cooper, she said the main point she hoped to get across was the dire need for disaster funds to get to producers as quickly as possible.

Given the ongoing frustrations growers have with the slow process of receiving
Hurricane Irma relief funds, Fried hopes these frustrations can be avoided with this new disaster package.

She applauded the resilience of Florida’s farmers and shared some high hopes for the future.

During a brief press conference following the Florida meeting, Perdue also addressed some concerns with the USMCA. You can listen to his comments here.

To view the recorded stream of the meeting, visit www.thefloridachannel.org and search for Roundtable Discussion on United States-Mexico-Canada Agreement (USMCA) and Disaster Aid.

Farmers, Perdue and Georgia legislative leaders met on a farm in Doerun to discuss disaster relief and express their gratitude for the passage of disaster aid. The setup was a little different than the Florida meeting, with all the leaders at one head table and hundreds of farmers surrounding them, all huddled underneath a metal pavilion.

According to Cooper, hundreds of Georgia farmers impacted by the storm attended the meeting and expressed their gratitude for legislators’ hard work on getting a disaster-aid package passed.

Some major players were represented at the meeting, including Georgia Commissioner of Agriculture Gary Black. He believes the passage of disaster aid “is something to celebrate.” He knows Georgia farmers have been waiting for some help while doing what they can to rebuild by themselves.

Black is hoping to get funds in farmers’ hands as soon as possible. “The hard work begins now … We’re going to make sure this is something Georgians will be proud of and we’re going to do our job,” he says.

Georgia Rep. Mike Cheokas was also in attendance. His district was heavily impacted by Hurricane Michael in October 2018. He is excited to have an answer for his farm and rural constituents. “I’m glad to see the federal government finally stepping up to the plate,” he told Cooper in an interview. “Our farmers are our lifeblood in this part of the state.”

Cheokas also discussed the divide between urbanites and rural communities especially when it comes to disaster relief. Some urbanites wonder why disaster relief is needed when insurance exists. When asked about this disconnect, Cheokas responded, “There’s such a disconnect. They (urbanites) don’t understand the issues faced by rural Georgia.”

Hear the rest of Cheokas comments:

Cooper was also able to catch up with Georgia farm owner and operator Bart Davis, who is relieved to finally have some answers. He also expressed his gratitude for all the lawmakers who helped make this happen. “Nobody gave up,” he said. “We kept fighting and we got there.”

Be sure to keep up with ongoing updates on www.VSCNews.com and www.SoutheastAgNet.com as funds begin to be doled out to farmers.