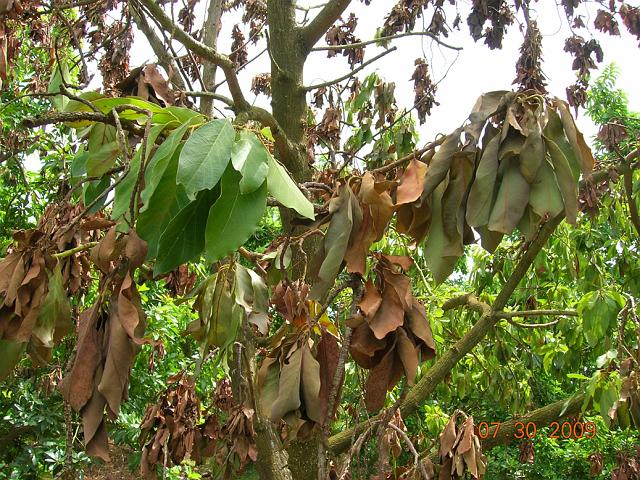 The largest produced tropical fruit in Florida is enduring a disease that is having similar impact that Greening is having on the state’s citrus industry.

Avocados, which are produced on approximately 1,500 acres in South Florida, are being severely impacted by laurel wilt disease.

“It seems like as it’s getting worse and worse,” said Alan Chambers, plant geneticist at UF/IFAS Tropical Research and Education Center. “It’s the same problem as citrus greening; Do you replant? What can we do to protect the trees? Is there anything on the market that you can use to spray? Are there different techniques you can use to make the insects less attractive to the avocado? They’re still open questions.”

What to Look for?

UF/IFAS recommends that producers scout their groves regularly to locate trees impacted by the disease. Symptoms include green wilted canopies, especially if they are located near a desiccated, declining or dead tree. Other symptoms include brown leaves that cling to the tree but do not drop up to 12 months.

“In terms of severity, it’s on par with citrus greening, except that avocado is a much, much smaller industry than citrus,” Chambers said. “It’s a big problem, not necessarily the investment into research to try to solve the problem. It’s still a year-over-year major problem for avocado.”

Chambers added that the disease has really ramped up during the last couple of production seasons.

“Avocado growers are used to doing very little. Avocado doesn’t need a lot of those chemical inputs to stay healthy. Now with laurel wilt, everyone’s trying to scramble to figure out what can be done,” Chambers said. “We specialize and thrive on niche crops. You’re not talking hundreds of thousands of acres, but that thousand acres is very profitable.”

UF/IFAS recommends that growers remove and destroy trees in decline. These can be breeding sites for ambrosia beetles. It is also important to keep groves pruned, as beetles prefer shady areas and are less likely to relocate to groves that are well pruned.