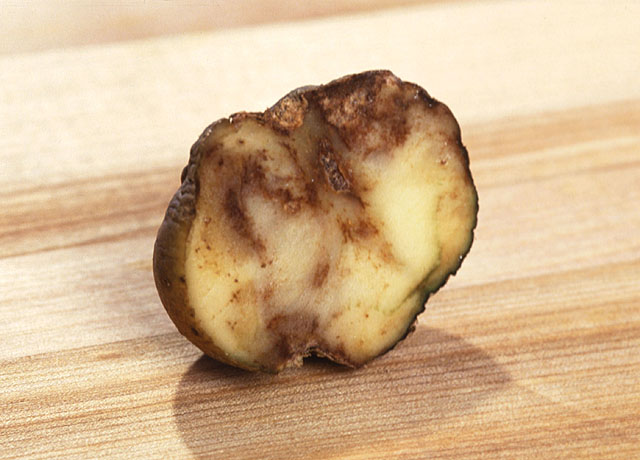 He scouted the rest of the affected portion of the farm on Saturday but did not see further spread of the disease. Still, England wants to make other farmers aware to be on the lookout.

“It’s nothing bad right now, but anytime it gets in the area, we always let everybody know. With the weather we had with rain and cooler temperatures (this week) it is more capable for late blight. Hot and dry (temperatures), it’s not all that favorable for development,” England said. “The growers definitely need to be looking for late blight.”

He said farmers in the Live Oak, Florida area need to be made aware since a bulk of potatoes are produced there. Producers need to be proactive in preparing for and managing this disease, considering the destruction it can have on a potato field.

“It’ll totally destroy the potato vines before potatoes mature. That disease, you’ve heard of the Great Irish Potato Famine, it’s the same disease,” England said. “Back in those days, they didn’t have any fungicides to put on them.

“Hopefully, it doesn’t show up on any of the local farms but if we see it in the area, we definitely get the word out so everybody can step up their scouting.”

According to University of Florida, symptoms of late blight may begin as dark green water soaking that may be associated with chlorosis or necrosis, depending upon the age of the lesion and the weather conditions. Under relative humidity in excess of 80%, lesions may appear purple to black with white sporangial growth. Under hotter and drier conditions, the lesions turn brown, dry out, and appear papery.

To learn more about the disease, see Late Blight’s Impact on Potatoes and Tomatoes.